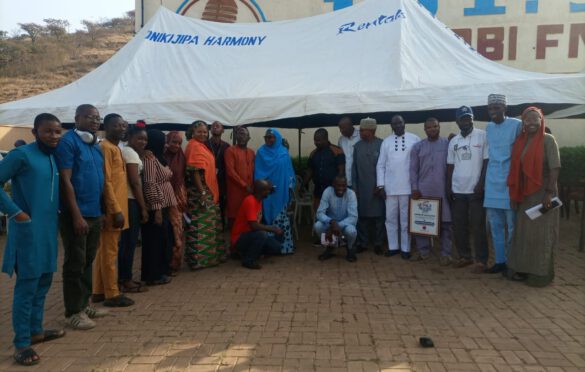 The Nigerian Journalists have been urged to be alive to their responsibilities by being gate keepers of Information and ensure that the public get factual account of events at all times.

Chairman of Sobi FM Chapel of Nigeria Union of Journalists (NUJ) Comrade Dare Akogun  said this in his opening  remarks at the maiden press week of the Chapel held at the premises of the Radio station.

The colourful event which commenced, on Monday, December 13, 2021, featured a medical examination and health talk for members of the chapel and other staff of the station. 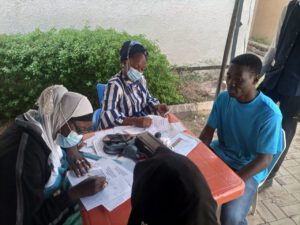 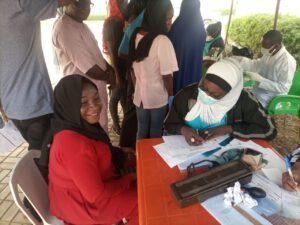 The event climaxed, on Tuesday 14, 2021, on a different tone as the grand finale of the Maiden Press Week, with lectures and awards ceremony under the theme: “The Role of Media in Combating Fake News and Disinformation.

Akogun in his address said, “we are in an era where all manner of informations are accessible on social media hence it has become necessary for journalists to become educated, skilled, equipped in the act of fact-checking.”

He lamented that the license to freedom of information had been abused with the impulse of fake news mostly through the  social media.

According to him “Journalism, information technology and the public are the major driving forces of misinformation, and the advancement in technology has added speed in fake news dissemination which has contributed largely in making verifying information much more challenging.

Akogun noted that we are in an era where all manner of informations are accessible on social media, thus necessitating journalists to become educated, skilled, equipped in the act of fact-checking to prevent escalation of untrue information that may influence decision making to the public.

He added that “The trends leading to the local and global challenge of security, is reversible if serious proactive and sustained measures could be adopted by the media in being alive to its responsibilities of being the gatekeepers of Information and ensuring that the public get factual accounts of event at all time.

“If the Nigerian nation is to be developed, there must be an army of media practitioners who conduct fact check and be broad minded enough to campaign for justice, equity and fairness beyond narrow group interests.

“Therefore, a major challenge of nation-building in Nigeria revolves around how to produce truly national media practitioners who will be at the forefront of the fight against fake news or disinformation that sneaks into the media space, ” he said.

He also said that  the training of journalists in the Chapel will not only help in promoting credible information dissemination in Kwara state and Nigeria as a whole but also equip media practitioners in carrying out their core mandate of giving the right information to the people.

In his remarks the State Director of the National Orientation Agency, NOA Mr Segun Adeyemi commended Sobi FM for the choice of topic which he said couldn’t have come at a better time.

“Fake news and misinformation are the major factor contributing to the crises bedevilling the nation at the moment, and as an agency we always happy when the media is joining us in the fight against the menace”, he said.

Adeyemi expressed readiness of the NOA to partner with the media and other private organizations to lead the fight against fake news or misinformation inorder to have a peaceful and united nation.

Earlier in the week, an occupational health coordinator from the Kwara state Ministry of Health, Dr Fatimah Lah, while carrying out medical screening of members to herald the maiden press week of Sobi FM chapel of the NUJ, held at the station premises.

Dr. Lah while talking about importance of periodic medical screening especially at a place of work, said regular medical check up will aid early detection of ailments and prevention of complications that could be detrimental or cause death.

According to her, “Journalists are always on the move searching for news while others at the office sit for a longer period of time, which makes them prone to muscular skeletal pains.

The highlights of the event was the award of excellence given to three deserving individuals in Kwara State which are, Dr Saudat Abdulbaqi, founder of Adeslam Properties Odukoya Adeola and the chairman of Evergreen Prince Adeniyi Idowu.

Dignitaries at the event include the state  the Director corporate Services University of Ilorin, Mr Kunle Akogun, Treasurer of the state council of the NUJ, Tayo Kannike, members of the Correspondents chapel led by its chairman Hakeem Garuba among others.