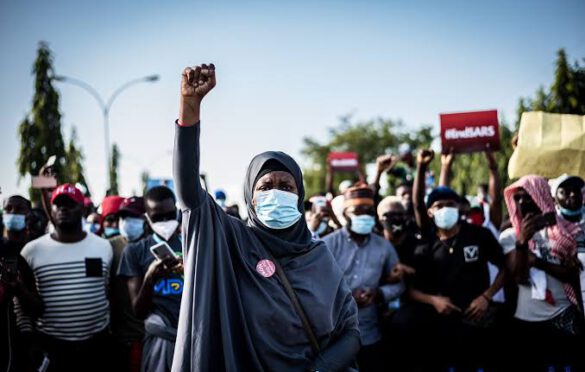 In the last one or two years of our national life, there is this constant manifestation that suggests that, the ruling elites in Nigeria do not recognise the right to peaceful protest as a crucial element of democratic culture. None has been more culpable than the current administration, what with, the way it has handled some civil protests in the last couple of years. There is a very strong signal that the Buhari-led administration is sending to the rest of the civilised world; a very dangerous one at that. And that is; a policy of zero-tolerance for peaceful protest and most worryingly, dissenting views. Meanwhile, this is entrenched in the Nigerian constitution – sections 39 and 40 are very explicit on this.

It is the pinnacle of irony to imagine that, President Muhammadu Buhari who, while in opposition, about a decade ago, deployed the use of peaceful protest and expression of very strong opinions, to signpost what he deemed misgovernance by his predecessors, without him being hounded, is now being this ruthless towards people exercising their democratic rights. His government, to say the least, has been very intolerant to toward the same constitutional provision on which he leveraged, especially, as it affects the way he handles some issues that pose existential threats to the corporate being of Nigeria. Insecurity is one of those. Police brutality, that was emblematic of the disbanded Special Anti Robbery Squad, SARS, which culminated in the #ENDSARS protest last year, is another.

The Nigerian Police Act – 2020″ says, “the police shall provide security for lawful and peaceful protesters”, with a view to ensuring that, it is not hijacked by hoodlums. But I can say, without any fear of equivocation that, the reverse has been the case, with the benefit of hindsight. Last year Lekki protest was peceaful for the greater part of two weeks, until the Police arrived at the scene, reinforced by the army “upon invitation by Governor Babajide Sanwo-Olu, on the red-lettered day, 20th of November 2020, and started shooting at unarmed peaceful protesters – a blatant violation of the” Geneva Convention” that prohibit unarmed adversary being shoot at. It is also an aberration of the global best practices in civil protest management. This is evident in what happened about three years ago, when some group of protesters in France, called “The Yellow Vest Movement” took to the street. They were on the street for months, without any report of the French Gendarmes becoming overzealous and shooting at any of the over a hundred thousand protesters who were majorly from the rural areas, protesting one of the French President, Emmanuel Macron’s policies. Macron had, as part of his environmental policy strategy, announced a green tax on fuel to go into effect, 1st of January, 2019; something that did not go down well with some rural dwellers.

One funny typical Nigerian slant to the whole thing is that, any protest almost always becomes politicised and ethnicized, whenever voices of reason call for restraint on the part of the security agents. They claim it is an attempt at bringing down the government of the day, who coincidentally, is from a particular part of the country. Then, and even up till now, some elements on social media make it look as if, the protest against police brutality, perpetrated majorly by much-dreaded, blood-thirsty men of that tactical unit SARS, was an orchestrated anti-North, anti-APC and anti-Buhari agenda that must be resisted. Some Northerners who see beyond the the ethno-religious line were muffled by the cacophony of noises from the Buhari-centric mass, through cyber bullying and outright physical threat. Some myopic Southerners also fell into the trap by sounding as if it was a North-versus-South thing.

Peaceful and lawful protest, it must be emphatically stated once again, for those who do not know or pretend not to know, or those who know, but want to be mischievous, that it is a critical element of democratic culture and a matter of democratic right. Any attempt at jeopardising it deglamourizes democracy, and might lead to pent-up anger against the government that will turn out to be “a keg of gunpowder”, which explosion may not be in the best interest of those in power.

For a smart leader, a peaceful and lawful protest, is a legitimate avenue for those who are dissatisfied with government policies to ventilate with minimal, if any, adverse effect on the government. A responsive and responsible government in turn, sees it as a feedback mechanism, using the harvested feelers from the channel to fine-tune its policies to suit the yearnings and aspirations of the masses, or a segment of the masses, without jeopardising the interests of the majority.

Just recently, on Friday last week, groups of youths in some northern States with the hashtags; #NoMoreBloodshed and #NorthIsBleeding, embarked upon a protest against escalating insecurity in the region. The youth protesters had, on Friday, hit the streets of Kano, Bauchi, Zamfara, and Sokoto States and the Federal Capital Territory, Abuja, simultaneously to register their anger over the incessant killings of innocent Nigerians by bandits and terrorists with the government appearing to be doing little or nothing to protect the lives and properties. In short, kidnappers are having a free rein.

The protesters, under the Coalition of Concerned Northern Nigerian Groups, demanded an immediate end to the killings going on in the region. They also lamented the gruesome killing of over 40 bus passengers at Gidan Bawa village in Sokoto State.

Speaking to journalists, one of the leaders of the groups, Zainab Ahmed, said the northern part of Nigeria was bleeding owing to the incessant killings in the region. She said, according to a report by the online edition of “The Punch” newspaper; “We are here to call on the Nigerian government that the North is bleeding and enough is enough. We are tired of burying our women, children, and men. Our crops are being razed by bandits.”

Rather than engaging and listening to them and their complaints, even though it (the issue of insecurity) is well-known to keen observers of events in Nigeria, in the global community, one of the conveners and leaders of the protest in Kaduna, Ibrahim Birniwa, was reportedly invited by the Department of State Service, DSS, on Saturday for questioning, over his involvement in organizing the protest. Meanwhile, the men of the secret police had, a day before (on Friday) invited Zainab Ahmed, who led the Kano leg of the protest for questioning, over her participation in the protest. She would later dissociate herself from the protest, moments after coming out of custody of the State Security Service, SSS, on her Facebook page, saying she would no longer participate in the protest. There is no gainsaying that she has been intimidated into backing out. She is neither Aisha Yesufu, nor Obby Ezekwezili. The “Poor Zainab”, was quoted by an online news media, “Daily Nigeria” to have written on her Facebook page that; “I want to let people know that from today, I’m dissociating myself from the protest that started today. I’m kindly advising my Kano people to stay away from tomorrow’s protest.

“I’m aware of some issues, and I’m worried about the safety of people and I don’t want anyone to be hurt due to such action. It could be very risky for people to protest tomorrow in Kano due to the information I heard about the plans to hijack and cause chaos for some political interests.

I advise us to stay at home for our SAFETY. I was invited for a friendly discussion by the DSS. It is not about me or you, rather the interest of the state. Peace,” she wrote, calling on other protesters to boycott the protest as well.”

In case you missed it, what triggered the protest is that, 23 commuters, traveling from Sokoto to Kaduna reportedly had their bus shot at, and got roasted alive by the terrorists that the Federal Government had over pampered for far too long, and just recently had to tag them terrorists, based on a court judgment, even though they have more than met all the criteria to be qualified as terrorists on account of their criminal activities. It would be recalled that those social malcontents had once downed a military aircraft, apart from their normal pastime of Kidnapping school kids and travellers for huge ransom.

So when we say it is a dangerous trend, for a purported democratically elected President, not to concede the right to “peaceful and lawful protests” to the citizenry, some folks misconstrue it to be an anti-buharist campaign. Some protests, most of which has its epicenter in the South, are viewed as either an “anti-North or anti-Buhari agenda”, by those who had been blinded by politics of ethnicity and religion, instead of viewing things from the prism of broader national interest.

I am as concerned for those peaceful protesters, who were arrested for exercising their democratic constitutional rights, but are being intimidated and harassed, as much as I was, for those who were shot in other parts of the country, Lekki inclusive. It is you today; it could be me tomorrow, and vice versa. I must say, without mincing words that, this government, going by the way it handles peaceful protests, is a shame to the civilised 21st century global community!

As the premium placed on human lives in Nigeria, by the Federal government continues to nosedive, the reality is beginning to dawn on those who egged on the seeming nonchalant attitude of the Buhari-led administration towards the issue of security in the country, especially the emergence of terrorism, euphemistically tagged banditry, in the North West that it is a tsunami that will spare nobody, if nothing is done to contain it urgently. And this, if not crushed as soon as possible, by the time the uncritical mass in the North and South wake up from their deep slumber; join forces with themselves; and also do a trans-class alliance with the critical few, it would signal the end of the reins of the privileged Lords of the Manor who have been misled by the artificial barrier, created by them, between them and the people they supposedly represent in government.

That peaceful and and lawful protest is an important element of democratic culture is non-negotiable.

Abubakar writes from Ilorin. You can reach him via 08051388285 or marxbayour@gmail.com