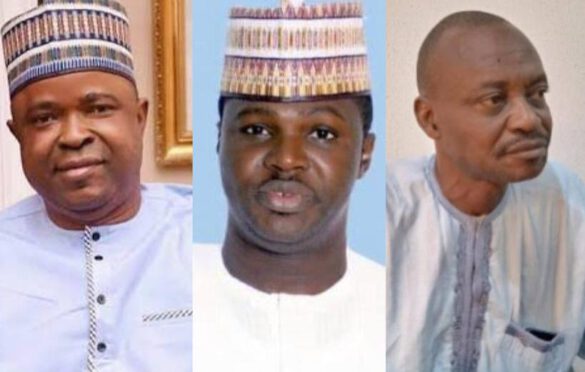 The announcement of a former Senator representing Kwara South, Rafiu Adebayo Ibrahim and Otunba Taiye Afolabi as the consensus candidates of the People’s Democratic Party (PDP) for Kwara South senatorial seat and Ifelodun/Offa/Oyun Federal constituency respectively, has sent shiver down the spines of the ruling All Progressive Congress, APC Stakeholders in Oyun local government.

Recall that it was recently reported that the Kwara PDP through a consensus arrangement, settled for Sen. Rafiu Ibrahim as the Kwara South senatorial candidate in the coming 2023 general elections.

While Sen. Rafiu, who was defeated by the incumbent Architect Lola Ashiru in the 2019 general elections is believed to be one of the few popular candidates in the PDP, swept by the OTOGE tsunami, Otunba Taiye Afolabi on the other hand is a grassroots politician of note and former Special Adviser on Infrastructure to Gov. AbdulFatah Ahmed.

Consequently, gripped by fear of the political acceptability of Sen. Rafiu who hails from same local government as incumbent House of Representative member for Ifelodun/Offa/Oyun, Tijani Ismael, the APC stakeholders in Oyun local government have kickstarted efforts to ensure the party did not field Rep Tijani Ismael for re-election, come 2023.

A group of concerned stakeholders on Wednesday, called on party stakeholders at the State level not to return Hon. Tijani as a candidate for House of Representatives, if victory is the Party’s priority in Oyun local government come 2023.

According to the stakeholders,
“If we must win 2023 elections in Oyun, we have to prepare to contend with the political influence of one time Senator in the 8th Assembly which has grown more significantly after 2019 elections, for reasons unconnected with the reckless attitude of some political players in this area.”

“Oyun local Government was hitherto a stronghold of APC during 2019 elections but that cannot be said today. The present political gladiators in Kwara State, most especially the Ifelodun/Offa/Oyun Federal Constituency recorded landslide victory despite presentations of grassroots personalities by the opposition PDP, against our dark horse – Tijani Ismael. Unfortunately, he messed up the opportunity”, the statement added.

The statement further recalled, that the ruling Political Party as at 2019 presented a serving Senator from Oyun LGA, Sen. Rafiu Ibrahim for the Kwara South Senatorial Election and a serving Federal House of Representatives member, Hon. Tope Olarinoye a.k.a. Danlad for the Federal Constituency Election.

“These choices were a very tough one for the APC, but luckily, we were able to produce very popular politicians in the district for Senate and Reps; Arc. Lola Ashiru and Hon Saheed Popoola. However, because both Ashiru and Popoola are both from same LGA, Offa, our Party had to cede the Reps ticket for the sake of political balancing to Hon. Tijani Ismael – a dark horse who was relatively new and unknown in politics. An effort made possible by the effort of a vibrant political figure in Oyun APC who was then part of the APC caucus in the State.”

“Over time, our Party Members have watched with keen interest, the performance, attitude and credibility of all the elected officials. Whereas, progress have been recorded in many areas, some of the elected officials have also recorded significant setback for our people, owing to poor representations.

“One of such representatives that has dragged us backward is the Rep Member for Ifelodun/Offa/Oyun Federal Constituency, whose character, attitude and integrity has turned against the people, divided the party, caused much confusion among traditional rulers and their subjects and above all, alienated his Constituency and the party.”

“This developments, has led to lost of confidence by members of the communities in our Constituency towards the Representative Member, who seldom visit the state, talk less of his Constituency. His disconnection with his kinsmen has led to the call by the people of Erin-Ile, for replacement of Hon. Tijani Ismael with another community man from Erin ile, in less than two year in office, which led to the emergence of Otunba Taiye Afolabi as an aspirant in the PDP.”

“These and many more is also responsible for the agitation from Ifelodun LGA APC to take the Rep ticket at all cost irrespective of fairness and equity in distribution of Elective position.”

Reacting to this development, an APC stalwart said “The party must put up a good strategy to counter the looming failure in the axis, which may snowball to other LGA if good care is not taken in the selection and choice of candidates to Represent APC in various positions from the axis. APC would have no option than to retrategised in feeding a better candidates to feel in the lacuna.”

“The choice candidate must be experienced and have the ability to galvanize every interest groups in the axis to give PDP tough moment in the forthcoming general elections”, he added.

The Party stakeholders appealed to Gov. AbdulRahman AbdulRazaq, Kwara APC Chairman, Chief Sunday Fagbemi and party elders to look critically into their concerns and prevail on the leadership of Oyun APC enable a democratic process that will enable the emergence of a more experienced, credible and sellable candidate for House of Representatives from Oyun LG, that will be more acceptable to Offa and Ifelodun LGA.