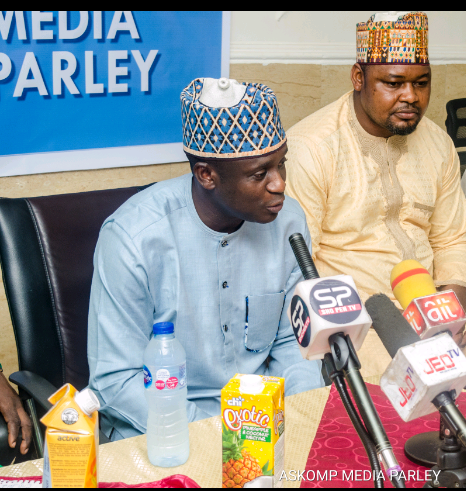 By Adebisi Oyelere
The Speaker, Kwara State House of Assembly, Rt. Hon. Salihu Yakubu-Danladi has debunked insinuations that the 9th Assembly is a rubber stamp to the Governor Abdulrahman Abdulrazaq led executive of the Kwara State Government, stressing that the Assembly does not receive command or pressure from anybody in the line of their job.
Danladi made this clarification at the Association of Kwara State Online Media Practitioners (ASKOMP) maiden media parley, held at Crystal House, Ilorin yesterday, adding that “whoever witnessed the last screening of commissioners nominees, budget defence among others will sure know that members of the 9th Assembly can’t be and would never be pushovers.
He said “People will always try to rationalise the reasons why their expectations of a fractious relationship between the legislative and executive arm isn’t achieved and that is why they will attempt to blackmail one of the partners, often times the legislative arm.
“They have refused to accept the fact that we are all (executive and legislative arm) babies of the same Otoge parent, therefore our primary focus is a progressive Kwara. In that light, we already have a unifying goal congruence, so seeing us fighting will be nearly impossible.
“That’s however not to say we don’t have disagreements, divergent opinion among others. But we have a very effective internal mechanism that addresses differences as they arises without having to go public.
“For those saying we are rubber stamp, what I think they expect from us is open confrontation with the executive, or maybe media confrontation, I can assure you that will not happen with the present partnership existing between the House and Executive.
“Why do we need to fight the executive when we all have been able to latch on the partnership to individually and collectively facilitate projects back to our constituencies? Virtually all the 24 constituencies have at least a project to show for the partnership, with many more on the way” he added.
On agitation for power shift to Kwara North, he charged the proponents to redirect the energy to demanding for more dividends of democracy for the people, stressing that life itself is not assured, so as mortals, we should focus more on the immediate and leave the future in God’s hands
“I think it is too early to start discussing 2023 general elections. Let’s focus on fulfilling our campaign promises and deliver dividends of democracy to people across 16 local government areas. Nobody can guaranteed what will happen tomorrow, so why are we disturbing ourselves about power shift or 2023 elections. Let’s use this four years for the betterment of our people and the state at large.
In his closing remarks, the Chairman Association of Kwara Online Media Practitioners (ASKOMP), Salihu Shola Taofeek commended the speaker for attending the interactive session with journalists to commemorate 9th Assembly second year anniversary.
Salihu Shola Taofeek said the association was established to sanitize online media space, build members’ capacity and prevent spread of fake news.
ASKOMP Corporate members at the second edition of the Association Media Parley include Informant247, FreshInsight, Justevent, FactualTimes, Insider, SATCOM, Shopen, Symbol news, 9japarrot, Spiceygist, Studio614, Factzone, Intercontinental News, RoyalTimes, CityPulse, Goldennews and some journalists from traditional media outfits.