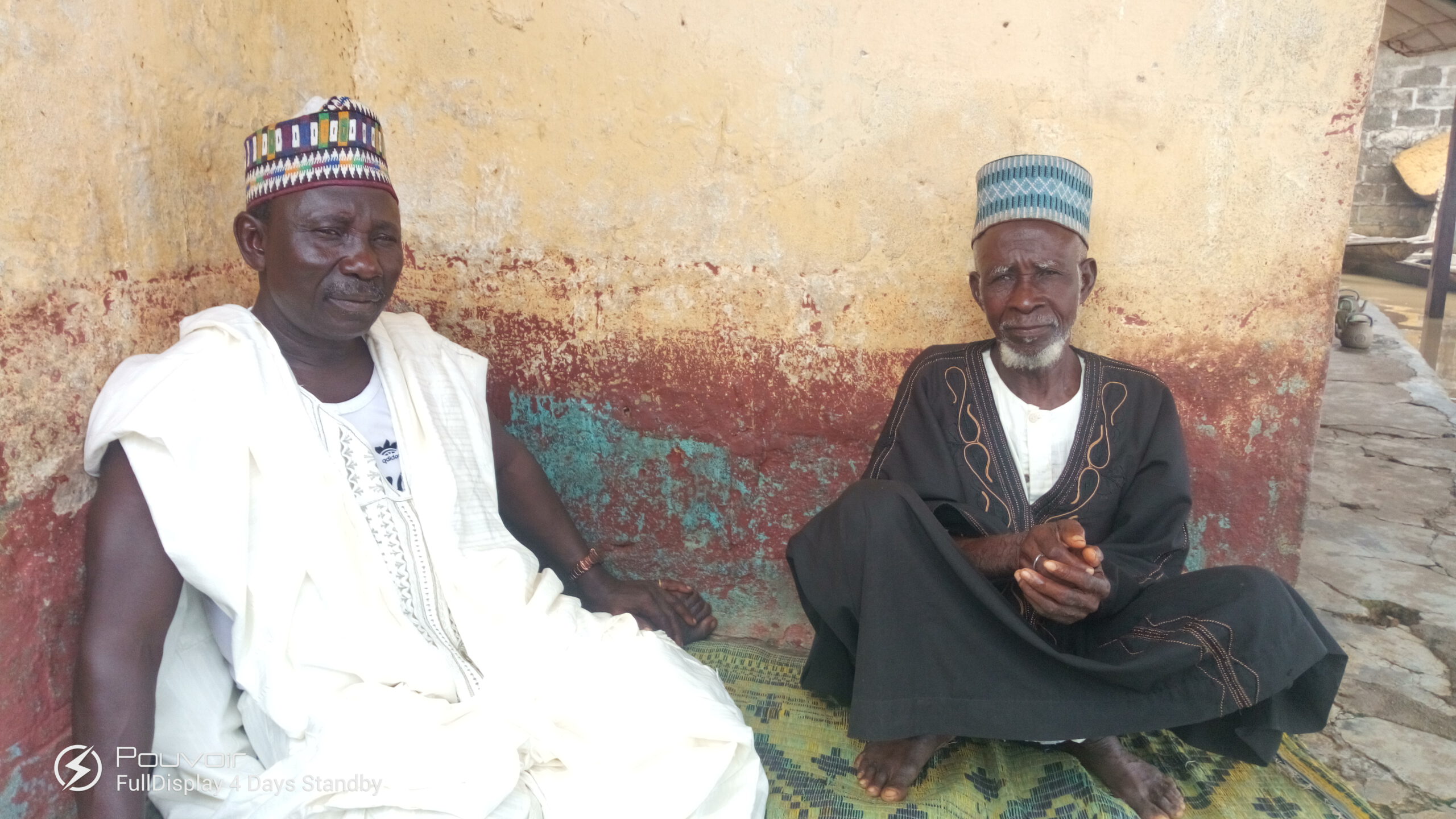 Looking into empty space, using his hands to support his cheeks and with sadness and loss of hope written all over his face, sighing intermittently like a lost dog not knowing where help will come from, that best describes the state Alhaji Mohammed Tsadu the village head of Kpata-Gbaradogi, when this reporter visited the community recently.

In August this year the Nigeria Hydrological Services Agency warned that Nigeria will experience torrential downpours and massive flooding in the latter part of the year as the country is approaching the peak of its rainy season, and flooding is expected to hit 15 out of the 36 states in the country.

The agency said it issued the red alert because of the above-normal water levels on the country’s two largest rivers, River Benue and the River Niger, and true to predictions, many communities along the rivers were cut off due to collapsed bridges, impassable roads and some were totally submerged in the ravaging flood.

One of such community was Kpata-Gbaradogi, a fishing and agrarian settlement just three kilometres away from Pategi township in Pategi local government area of Kwara state which is on the fringes of river Niger was totally submerged tuning it to a floating community. 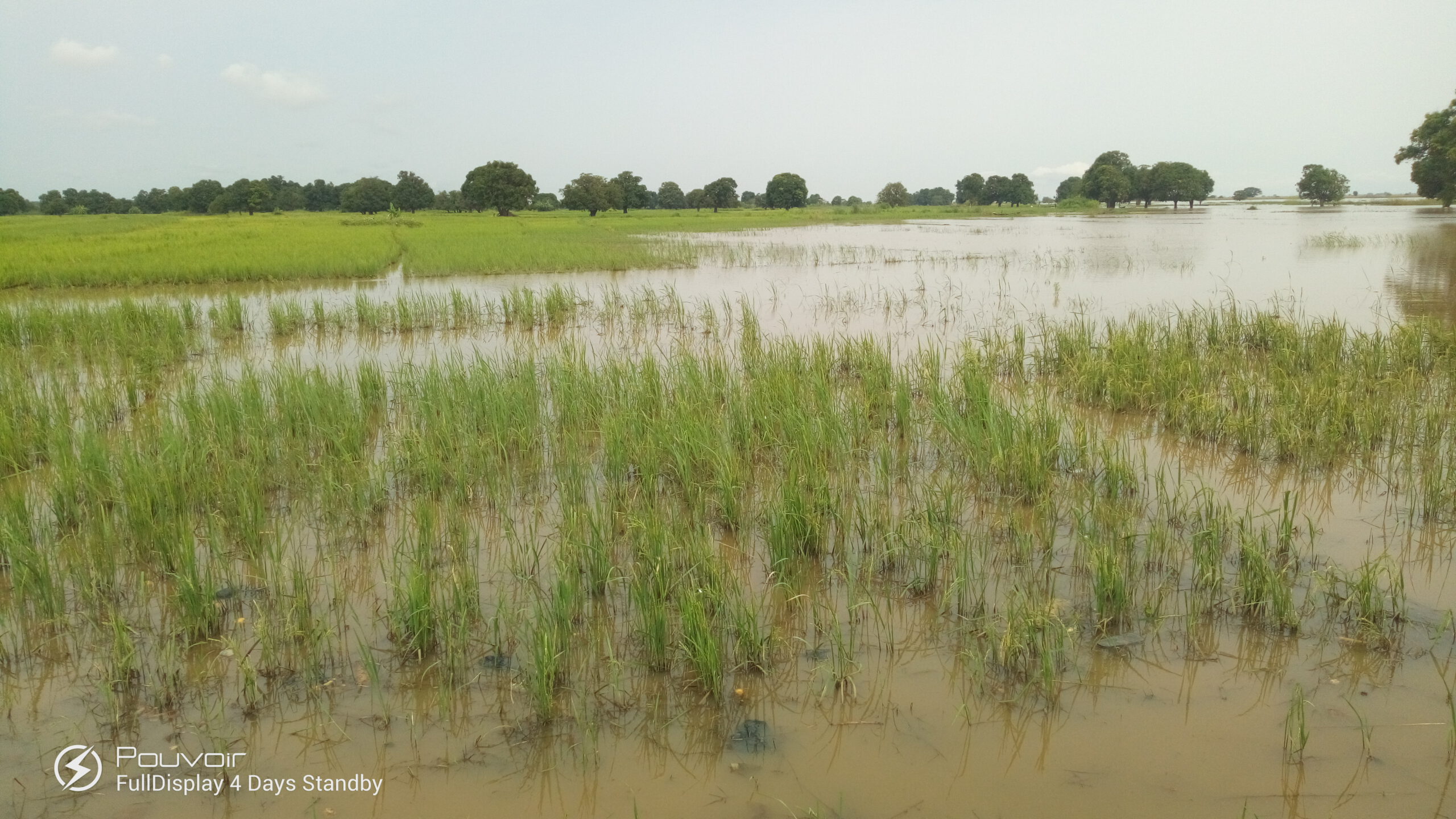 Over 100,000 hectares of rice, maize and millet farms were destroyed by the ravaging flood, about 100 residential buildings were also submerged by the flood which had reportedly rendered the entire community of about 1500 number of people homeless, including women and children.

The Tsowa Tsadu (fourth in command) Mohammed Jiya, who spoke on behalf of the community head on the perennial flood, said that flooding is not a strange disaster in Pategi as it is a yearly occurrence, but the level of this year’s flooding has never been witnessed by the community which has been in existence since time immemorial. 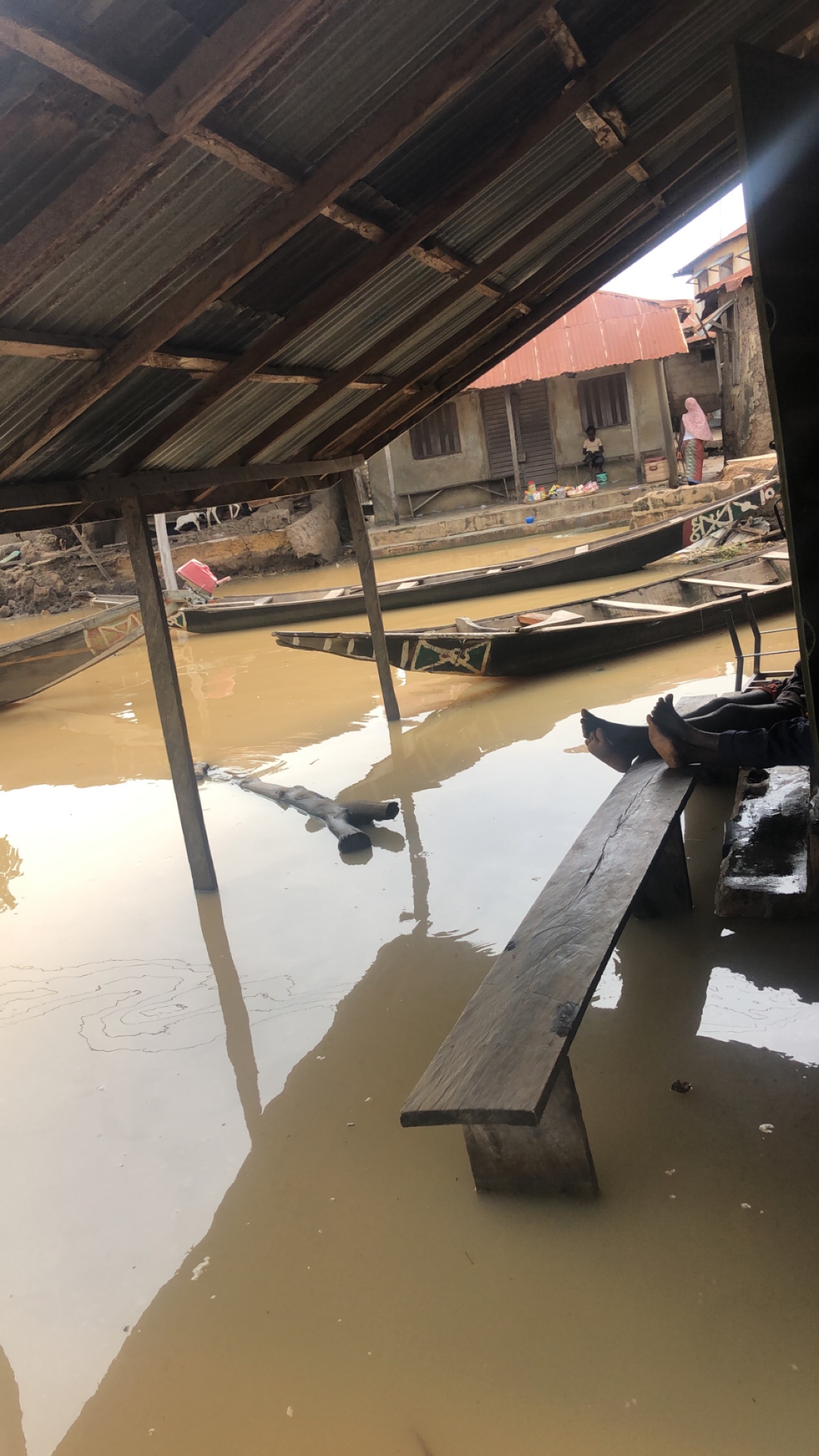 He said the current flooding came like a thief in the night entering every house and taking away their belongings.
He added that the flood also submerged schools, hospitals and other infrastructure found on its way including electric poles and pipe-borne water, said most residents of the town lost all their means of livelihood to the disaster.

“Though no lives were lost to the flooding, the people’s immediate need is pipe borne water, food and medical supplies”, he said.

Although, the Kwara State government has commiserated with the victims of flooding, which affected some communities in the state when the incidence occurred.

The State deputy governor, Mr Kayode Alabi, who was on an assessment tour to flood-affected parts of Edu and Pategi local government area of the state, assured the victims of the government’s support to alleviate their condition.

He expressed sympathy on behalf of Governor Abdulrahman Abdulrazaq and the government of Kwara State to the victims of the flood disaster.

He said the government would do everything possible to support the victims back to normalcy.
However, the village said these promises have been made for more than a month now and nothing seems forth coming from the state government and it appears they have been left to their fate.

The village head who called on the state government to assist in relocating them to another place upland, also appealed to the government to dredge the river causing the flood to prevent a future occurrence.

According to him “we are sending a save our soul message to the federal government through the Kwara state government to come to our aid, the entire community is on water and surviving has been very difficult for the villagers.

“We are living in fear because the flood waters which destroyed our farms for more than a month now refused to go down.

“We don’t have access to portable drinking water and food which will get across other community via wooden boats are at exorbitant prices and is greatly affecting the survival of residents of the village” he lamented.

“This flooding has been coming since the last seven years, and when the governor visited this community few months after he was sworn-in and we told him we would like to be relocated and since then we have not heard anything from the government.

“We find this current situation very difficult and we don’t have any other place to go that is why we stayed put hoping that we will get help very soon,” he hoped.

Alhaji Tsadu who said although the Deputy Governor Kayode Alabi was in Pategi local government recently to access the damage of the flooding expressed sadness that the deputy governor only stopped at the new river bank at Pategi which is about 10 minutes’ drive on boat to the village and members of the community were saddened over their lack of to have speak with him and let the government know their plight.

He said the community is need of any kind of help they can get like food and water to make life meaningful to the people of the community and also medical supplies to prevent outbreaks of diseases.

He thereafter appeals to the state government to look for a permanent solution to the yearly flooding disaster in the community by relocating them to upland to start a new settlement, and also try as much as possible to dredge the river Niger to save other communities around the river.

‘I am happy with the flood because I made more money from work’ – Boat Engine Technician in all of the loss of properties and uncertainty surrounding the survival of people of the community a boat engine repairer Suleiman Ndeji, the coming of the flood has been a blessing in disguise for him as he has more work to do.

Ndeji whose house and shop were swept away by the flood said despite the fact that he now lives in make shift tent on the bank of the new river said more boat engines develops fault now and he makes more money from it repairs.

He said “The boat engines get spoilt more often now than before due to the fact most parts of the flooded areas are hitherto dry land not deep for the engines to work and whenever it strikes a pebbles or wood it automatically stopped working which sometimes leads to capsizing of the boat,” he explained.

Ndeji who says he makes between N15 000 – N20, 000 daily since the flooding, revealed that he gets spare parts for the repair of the engines as far as Onitsha, Porthacourt and sometimes Lagos state.

Several Warnings given about impending floods

Early this year the Nigerian Meteorological Agency (NiMet) released the 2020 Seasonal Rainfall Prediction (SRP) which is to provide weather information to stakeholders in various sectors of the country.

The Seasonal Rainfall Prediction is especially important to sectors such as agriculture, environment and water which provide support base and opportunities for the employment opportunities for millions of Nigerians.
According to NiMet, rainfall onset in 2020 is expected be ‘near-normal to earlier than normal’ in most parts of the country. Rainfall onset is generally regarded as the start of the growing season for rain-fed agriculture.
The earliest onset date forecasted for February 24 will occur around the coastal areas of South-South states.

Rainfall amounts in the country is expected to be between 400mm in the Northern parts to over 3000mm in the Southern parts. Though the annual rainfall predicted is near normal for most parts of the country, the possibility of having rainfall anomalies in some parts of the country exists.
In the first of week of August 2020 The Nigeria Hydrological Services Agency (NIHSA) has asked states to prepare for flood in communities bordering the River Niger to prevent loss of lives and property.

The Director-General, NIHSA, Clement Nze gave the warning in a statement, where identified states likely to be affected as Kebbi, Kogi, Rivers, Niger, Kwara, Nasarawa, Kogi, Anambra, Delta, Edo, Rivers and Bayelsa.
He warned that the flood levels at the hydrological stations monitored in Niamey (Niger Republic) and Malanville (Benin Republic) have gotten to the red alert zone, as of August 23.

The director-general advised states to identify communities bordering River Niger to make adequate plans for timely evacuation of people to safe and higher grounds in the event of flooding.
He said the flood might arrive through Kebbi state around September 6.
“This current development portends some level of concern for Nigeria as there could be a likelihood of flooding in the above-mentioned states.

This flood magnitude sighted in Niamey is expected to arrive in Nigeria through Kebbi state around September 6,” the statement read.

“The country still has many days of rainfall in the cause of the year. More floods are therefore still expected in the months of August, September and October. In the event there is a release of excess water from the dams in other countries upstream rivers Niger and Benue this year, this will have more negative impacts on Nigeria which is located downstream other countries in the Niger Basin.”

Nze said the management of Kainji and Jebba dams have been informed to take appropriate actions in operating the reservoirs.
He urged states and local governments to put measures in place to minimize the impact of the flood.

“Accordingly, Kainji Dam is now spilling water at the rate of p86.4 million cubic metres/day. This means that communities downstream Kainji and Jebba Dams could be flooded. The Shiroro Dam on Kaduna River is still impounding, though there is the possibility of spilling water in the weeks ahead.”

The National Emergency Management Agency (NEMA) had earlier warned that 102 local government areas in 28 states across the country would witness flooding.
In June, floods took over parts of Lagos, affecting areas such as Marina, Lekki, Dopemu, Iyana-Ipaja, Egbeda, Ikeja and Ajah.

During Nigeria’s worst flooding in 2012, the Niger River reached a record high level of 12.84 meters. Two million Nigerians were forced from their homes and 363 people were killed, according to the National Emergency Management Agency.

With thousands of houses and hectares of farmland and produce destroyed along with schools and shops, the economic impact of this year’s flooding is expected to be high. The country’s emergency management agency is stepping in to distribute items like cement bags, blankets and hygiene products.

Peter Odjugo, a professor of geography at the University of Benin, and also works with the Nigerian Meteorological Society in helping them track the extreme weather patterns says the government has repeatedly failed to take preemptive measures to reduce the impact of flooding.

According to him “What they prefer doing or what they are doing now is services after the impact, rather than preventing it from occurring,” he said.
According to him government yearly warned villages and communities leaving around the fringes of the nation’s major rivers and those on the water ways to relocate to higher ground without making provision for such place to relocate to.

He said this inefficiency from the government as left these communities at the mercy of the flood which is mostly caused by the release of water from Kainji and Jebba dams to count their losses every year after the flood.
Odjugo suggests that the silt be removed from the rivers to increase the volume of water they can hold.

He also recommends that town planners enforce regulation on where buildings are constructed, saying this is a glaring weak spot across the country.
“City regulators look out for buildings being constructed near waterways. Such buildings are often marked with an X, designating an order to stop construction work, but unfortunately most of these buildings are later on completed after greasing the palms of officials or using influence or a highly positioned government appointees,” he lamented.