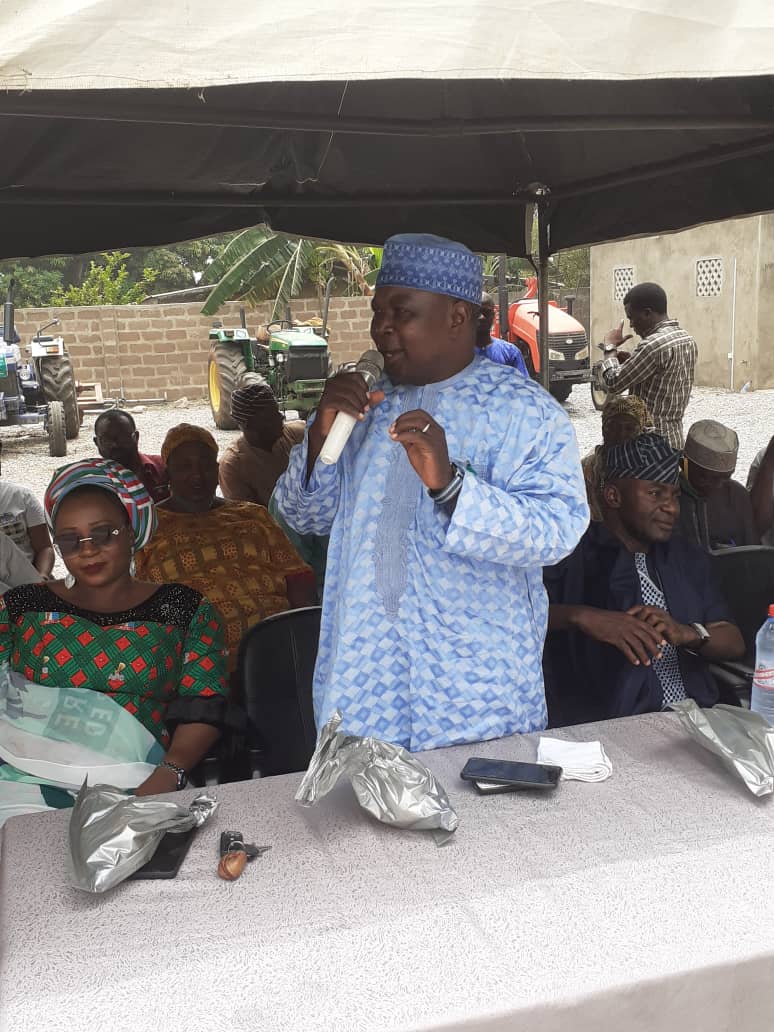 Member representing Edu State Constituency at the Kwara state House of Assembly, Hon. Mohammed Ndamusa Guyeji has disclosed that himself and Ojomu/Balogun State Constituency counterpart, Hon. Saheed Popoola are not the only lawmakers in the 9th Assembly in support of the APC Caretaker Chairman, Hon. Bashir Omolaja Bolarinwa, BOB.

Speaking at a stakeholders sensitization meeting at the State party secretariat, earlier today, Guyeji said “We are not the only State lawmakers with you, but we are the only ones bold enough to openly stand by our convictions at this trying period”.

The lawmaker said Bolarinwa stood by them firmly while they were seeking elections into political offices and won’t leave him in the face of the storm, “We are with him 100%”, he added.

Bolarinwa, earlier in his remarks said he considered meeting with all local government Chairmen, Vice Chairmen, Secretaries, Women and Youth leaders of the APC across the 16 local governments, to intimate them about the state of affairs of the party, for them to get the information across to the wards and various zones.

Speaking at the event, Bolarinwa said all he did for the Party was sacrifice and won’t relent in sacrificing for the greater good of party members and teaming Kwarans who reposed confidence in APC at the poll.

At the gathering, which was well attended by renown party stakeholders across the State, varying issues affecting the Party at both national and state levels were extensively deliberated.

In a communique issued at the end of the meeting, the meeting expressed displeasure over the upsurge of ethnic and religious violence across the country and urge for restraint among the political class in order not to exacerbate the problem, calling on all leaders of thought in the country to join hands with the APC-led Federal Government in nipping insecurity in the bud instead of fanning the embers or being plainly conniving and destructive.

While condemning in entirety. the rising wave of violence and thuggery in Kwara State, the gathering noted that “Violence had been unleashed on our party members at Moro, Edu and Banquet Hall, Ilorin. Curiously the perpetrators of violence are close to the seat of government. The government therefore should not allow politically motivated violence to further heighten the insecurity in the State.”

The meeting however, urged all members to continue to be steadfast in their support for the All Progressive Congress led by Hon. Bashir Omolaja Bolarinwa and party structure at all levels, calling on President Muhammadu Buhari and other founding fathers of the APC like Asiwaju Bola Ahmed Tinubu, Chief Bisi Akande, etc to urgently wade into the Kwara crisis before it snowballs.

Participants at the gathering also commended the courage and leadership of the various leaders and stakeholders of the party, particularly the two Ministers from Kwara State – Alhaji Lai Mohammed and Senator Gbemisola Saraki -who have lent their voices in demanding for a transparent and inclusive registration exercise that is in accordance with the guidelines of the party.

The meeting also urges the National Leadership of the APC, led by His Excellency, Gov. Mai Mala Buni to listen to the voice of reasons from these leaders, party stakeholders and the overwhelming majority of party members before the situation gets out of hands.

The party leadership call for calm and restraint from all its teeming members and supporters, inspite of the deliberate provocation by some elements in the party, expressing confidence that in due course, justice shall prevail.