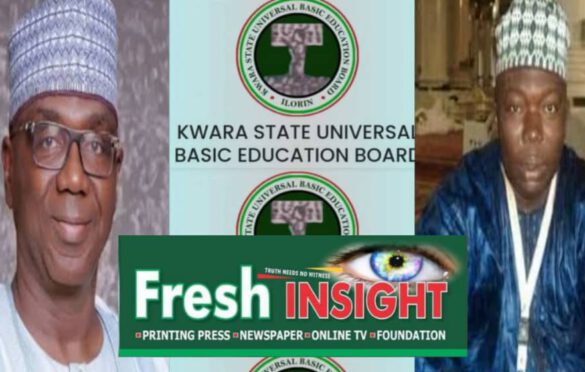 This much was confirmed through documents exclusively obtained by Fresh Insight, which not only confirmed the involvement of Kwara SUBEB authorities, but also confirmed its official endorsement after being notified of contract swapping intent, which was an aftermath of officially endorsed negotiations between buyers and sellers of contracts to trade the contract for certain percentage of the contract sum.

Kwara SUBEB Chairman, Prof. Adaramaja as an accomplice in-turn reissue the contract award letter carrying the company details of the illegal contract buyer, without recourse to the advertised criteria, nonparticipation in open bid not shortlisting of the company in the successful bidders list among other eligibility pre-requisites to execute the contract.

Companies that fall under this category are those under the auspices of Kwara State Indigenous Contractors and Suppliers (KICS) in APC, with Alh. Moshood Aigoro as its Chairman and main focal person.

It would be recalled Fresh Insight had in the first part of this investigation reported that no fewer than fifty four (54) contracts were awarded to unqualified companies through the banner of Kwara State Indigenous Contractors and Suppliers (KICS) in APC.

Smarting from the change of guard in the State occasioned by the historic Otoge movement that swept the Saraki dynasty, thereby ending a 4 decades firm grip of the Kwara sociopolitical space, Mal. Moshood Aigoro and some other Indigenous Contractors and Suppliers who had hitherto been sidelined from accessing government contracts due to their perceived none alignment with the dynasty swung into action, with the aim of cashing in on the change of guard to also benefit.

It was on that note they registered their group named Kwara Indigenous Contractors and Suppliers in APC with the Kwara State Ministry of Women Affairs and Social Development, Ilorin, as a Voluntary Organization. The registration certificate dated 29th October, 2019 with reference number MWASO/2809/2019. 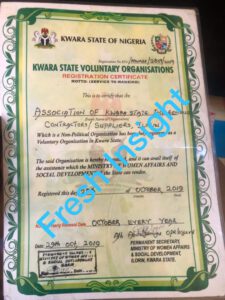 Relying on that certificate, a letter of introduction dated 11/11/2019 with reference number KICA-053 was written the State government and it reads “The above named Association that brings together all Indigenous Contractors and Suppliers irrespective of the State of origin as long as he or she resides in Kwara State, the registration is open to all interested Contractors and Suppliers.

“Sir, we hereby wish to use this medium to register our plights to your timely intervention. Before Dr. Bukola Saraki’s ascendency to power in 2003, his predecessors both military and civilians engaged the patronage (sic) of the Kwara resident contractors and suppliers and with moderate policies to encourage and make them triumph in carrying out their contract activities.

“As a matter of fact, past governments before 2003 secretly adhered to the policy of indigenization, where contracts and supplies were given to contractors residing in Kwara State to execute. However, shortly after the inauguration of civilian regime in 2003, the Kwara Indigenous contractors and suppliers who were once the pride of the State government were discarded. We no longer enjoy patronage of the State government.

“In all, the Executive Governor of Kwara State His Excellency Abdulrahman Abdulrazaq has thrown his support and promise to patronize the indigenous contractors and suppliers in Kwara State” it partly reads.

#.25B BLACK MARKET AUCTIONING OF CONTRACT

On 21st April, 2021 the group wrote a letter signed by Alh. Moshood Aigoro and Abimbola Lukman, the Association’s President and Secretary, respectively. The letter which was addressed to the Kwara State Governor, titled “LIST OF KWARA INDIGENOUS CONTRACTORS/SUPPLIERS IN APC WITH TENDER IN SUBEB” listed 64 companies and their project of interests. 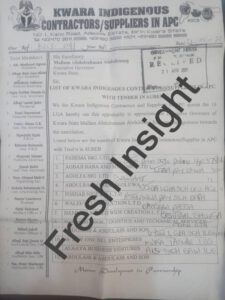 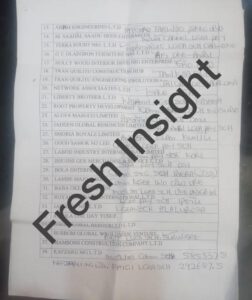 It was on that basis, the recommended companies were awarded 64 VIP toilet construction contracts at the rate of Four million, Thirty-Seven Thousand, Eight Hundred and Thirty-One naira only, with all the letters of approval handed over to Alh. Moshood Aigoro for onward transmission to the benefiting companies, on the basis of their membership of APC indigenous contractors association.

All the contracts awarded to companies under the banner of the Kwara State Indigenous Contractors and Suppliers in APC worth #.25b (#258,421,206), comes with a profit-sharing formula caveat of 70:30 percent. While 70% of profit is for the benefitting company, the balance of 30% profit is to be remitted to the purse of Kwara Indigenous Contractors and Suppliers in APC.

According to the Memorandum of Understanding and Agreement documents obtained by Fresh Insight, the agreement reads “The agreement made between Kwara State Indigenous Contractors and Suppliers and (NAME WITHELD) is in respect of the contract awarded by the Kwara State Universal Basic Education Board (KWASUBEB), Ilorin, Kwara State, Nigeria.

“It is hereby agreed as follows that the Kwara State Indigenous Contractors and Suppliers has conceded to your company (NAME WITHELD) to carry out the project titled construction/rehabilitation of road/schools at the contract sum of Four Million, Thirty-Seven Thousand, Eight-Hundred and Thirty-One naira, Thirty-Four Kobo only (#4,037,831.34).

“That a new account be opened for the contract as SUBEB project account in your company name, in an agreed bank with the director of your company and any other 2 members from the Kwara State Indigenous Contractors and Suppliers, signatory to that account for the purpose of that project.

“That two or three Kwara State Indigenous Contractors and Suppliers in APC members will work jointly with you in executing the said contract with you financially and morally. That the project will be carried out under the supervision of the Kwara State Indigenous Contractors and Suppliers Project Monitoring Committee” it concluded. 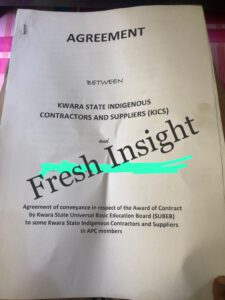 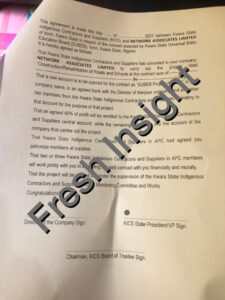 Documents obtained by Fresh Insight also revealed that the APC indigenous contractors in connivance with the Kwara SUBEB authority facilitated buying and selling of contracts between KICS member companies at a negotiable markup of contract sum.

It was relying on the agreement entered into by the contractors and the association (KICS) that individual letters were written to the SUBEB Chairman, Prof. Abdulraheem Adaramaja and copied to the Governor Abdulrahman Abdulrazaq to request swapping of the contract awards between different companies.

One of such letters dated 23rd June, 2021 and titled award APPLICATION FOR SWAPPING OF COMPANY addressed to Prof. Sheu Adaramaja and Governor Abdulrahman Abdulrazaq copied, reads “With the conclusion of our meeting within our membership and board of trustees, we hereby agreed with the owner of LABOD INDUSTRY INTERNATIONAL LTD to swap with ALUFA MASUCO LTD. We hereby plead for the SUBEB Authority to change it. For the easy execution, we now attached two companies (sic) supervise along with him for the perfect job, according to the rules and regulations by the State government”, it added. 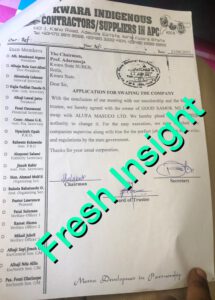 It was relying on one of these requests that a backdated letter of contract award which carried 24th May, 2021 was written to AL JUMAMIN CONCEPT by Kwara SUBEB, conceding to the request by one Alhaji Usman Muhammad of ARHM ENGINEERING LTD to swap contract for construction of VIP toilets in Aiyetoro Tapa JSS Ipako Obo, Ilorin (sic) LGEA awarded to it with JUMAMIN CONCEPT. 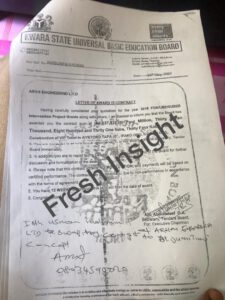 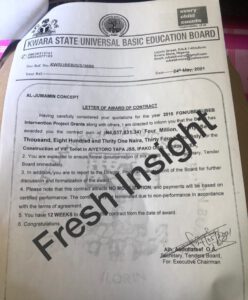 “Having carefully considered your quotations for the year 2015 FGN/UBE/SUBEB intervention project grants along with others, I am directed to inform you that the board has awarded you the contract sum of (#4,037,831,34) Four million, Thirty-Seven Thousand for the construction of VIP toilets in Aiyetoro Tapa JSS Ipako Obo, Ilorin LGEA”, the separate letter of award of contracts with same reference number KWSUBEB/S/S/3699 to the two companies read.

In commemoration of Gov. Abdulrazaq’s first 100 days in office, the group (KICS) embarked on solidarity road show and rally, printing souvenirs among others, with expenses incurred according to documents sighted by Fresh Insight amounting to #850,000.

The procession which saw the group and its members staging a carnival-like road show across the major roads of Ilorin metropolis terminated at the Ahmadu Bello way, set of power in Ilorin Kwara State. 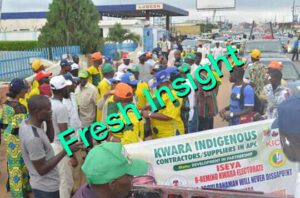 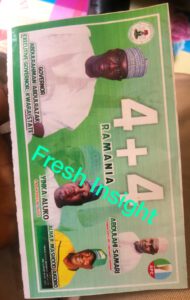 Among some of the expenses incurred by the Indigenous contractors as part of its reciprocity relationship with Gov. Abdulrahman Abdulrazaq through Prof. Abdulraheem Adaramaja was according to documents sighted by Fresh Insight a sum of #102,000 caption Deputy Governor’s Church blocks, ostensibly a minor renovation of the Deputy Governor Kayode Alabi’s Church blocks.