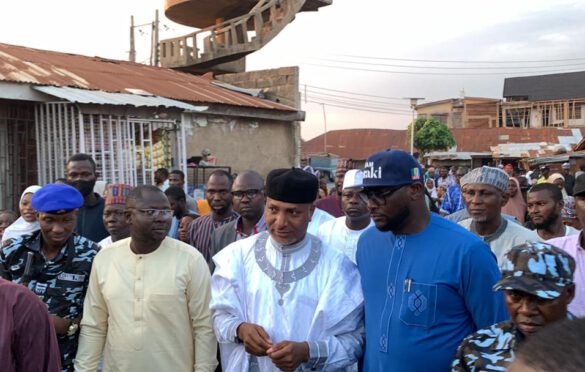 The All Progressives Congress (APC) Senatorial candidate for Kwara Central and Turaki of Ilorin Emirate, Mallam Saliu Mustapha has directed his group of engineers to commence an immediate rehabilitation of block of shops affected by a fire incidence at Alanamu Market in Ilorin, the State capital city.

An early morning inferno on Monday razed properties worth over eight million naira.

The fire incident, according to eyewitness was noticed around 4:00 am and affected more than ten shops loaded with goods like clothes, showing machines, refrigerators, soft drinks and other materials before it was put under control by men of the state fire service.

Confirming the incident, the HOD Media and Publicity of the Fire Service Hassan Hakeem Adekunle, said there was no one in the market when the fire started, adding that it was a bike man who saw the inferno and quickly summoned the state fire service to rescue the situation.

Victims were still counting their losses on Friday when Saliu Mustapha visited the scene of the incident.

While on the sympathy visit, Saliu was conducted around the 11 shops – that were razed – by the Balogun Alanamu of Ilorin, Dr Usman Abubakar Jos, to ascertain the level of damage.

Mustapha, who was received with pump and pagentry by a mammoth crowd of supporters and enthusiasts thereafter promised comprehensive renovation of the market, which, according to him, would start the next day (Saturday).

Saliu also asked the Balogun Alanamu to raise a committee that will liaise with his foundation in order to fashion out appropriate grant for victims to bounce back and enable them to re-establish their livelihood.

For his part, the Balogun Alanamu appreciated Saliu for his swift response to the unfortunate incident.

He also commended his philanthropic gesture, saying it predates his entry into politics.

Saliu, had earlier in a statement he personally signed on Tuesday, commiserated with the Balogun and the entire people of the community over the sad event