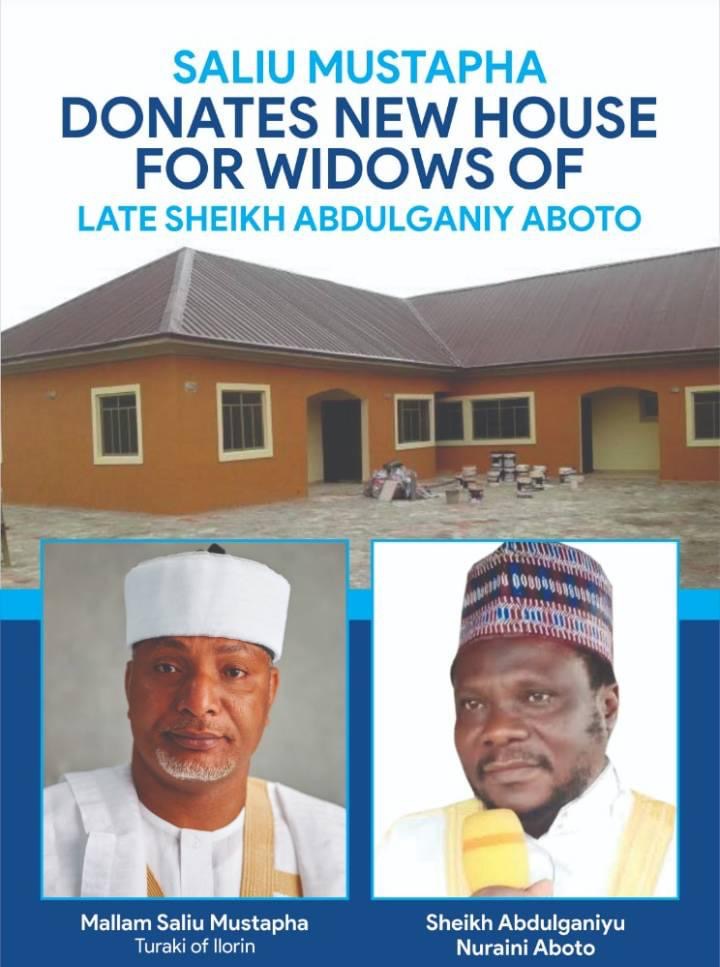 The All Progressives Congress candidate in the 2023 Kwara Central Senatorial election, Mallam Saliu Mustapha, has given out a 2-bedroom semi-detached apartments to the wives of the late renowned Islamic cleric, Sheikh Abdulganiy Aboto Al-Adaby.

Sheikh Aboto and two of his aides died in the flooding that ravaged some parts of Kwara state on Friday.

Their corpses were recovered by the state fire service from a river in Ilorin, Kwara state capital city, on Saturday.

The death of the cleric has however thrown the Muslim community into mourning with tributes pouring in from different parts of the country.

Governor AbdulRahman AbdulRazaq had described the death of the Sheikh as a huge loss for the Muslim community and to Ilorin as a whole.

Mustapha, on his part, described the death of Aboto as one too many. In a statement he personally signed but released to the media on Sunday, Mustapha said Sheikh Aboto was a pious cleric who groomed and touched many lives from far and wide.

This newspaper learnt that the cleric died without a house, leaving the two wives and 17 children in a rented apartment. He was also reported to have left a paltry 15,000 naira in his bank accounts.

And apparently in order to ameliorate the agony of the families, Mallam Mustapha, on Wednesday, announced a donation of a brand new twin semi-detached 3-bedroom apartment to the two wives and the children left behind by the cleric.

Apart from this, the two widows are expected to be empowered with capital to enable them to begin businesses to support the families left behind by the late cleric.

Similarly, the families of the two aides that died in the ghastly accident with the popular cleric are also to be supported to ameliorate the agonies of losing their loved ones.

The gesture, it was learnt, was communicated to the Khaliful Adabiya, Sheik Mohammed Kamaldeen, who received the news with joy and prayed fervently for the Turaki for his unrelenting efforts in the Ilorin Emirate.

Kamaldeen also recalled that the Turaki had sometimes last year privately donated a huge sum of money for the completion of the Sheirk Kamaldeen Islamic University on the request of the Board of Trustees of the University.

Meanwhile, several high profile clerics in Ilorin have reacted to the gesture from Mustapha. They described it as timely and thoughtful.

Sheirk Imam AbdulRazaq Tonile said that the whole of the Adabiyah family, of which Aboto was a prominent figure, would be forever grateful to Mustapha for the kind gesture on Aboto’s family. Also reacting at the venue of the prayers organised for the cleric at Ansarul Islamic Secondary School, Okekere, the Chief Imam of Ilm Central Mosque, Adewole, Uztaz Abdulaziz Aminullahi said the Turaki’s gesture would go a long way in assuaging the feelings of the families of the cleric who died piously without leaving either money or material property behind.

Meanwhile, residents of Aboto Alfa, in Asa Local Government Area of the state where the late cleric hailed from, have applauded the kind gesture by Mustapha.

A community leader, Alhaji Liadi Mogaji of Mogaji’s compound, Aboto, said this is yet another thoughtful intervention from Mallam Mustapha, who he described as a benevolent giver.

“I’m short of words. It is only God that can reward Mallam Mustapha for this. This is how we expect our elites to do in our time of need. This is what Turaki has been doing that a few irresponsible people are critical of. My advice is that in spite of their unfounded criticism, the Turaki should not stop. He should continue to be who he is. His critics have nothing to lose for they are elections season politicians who feel that speaking grammar without more is enough to lead a society or represent the people.