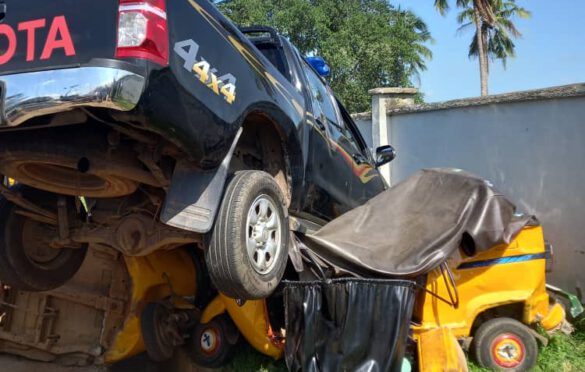 One of the major causes of accidents on Nigerian roads, is the ignorance of road users in the areas of traffic rules.

This has caused many avoidable accidents in the recent past. One of such rules is the one that gives the “right of passage” to the traffic on the left hand side. This normally occurs at roundabouts.

One of the spots that is very notorious for such accidents within the Ilorin Metropolis is the GSS roundabout, along Zango Road.

Recently, two accident occured, due to the knowledge gap for motorists, as to who has the right of passage, between the traffic on the left and the one on the right hand side.

One occured on the Wednesday, 31st of March, this year, involving a Pategi-bound Ford Space Wagon, fully loaded with passengers, coming from Maraba Park, and a Toyota Camry 98 model, coming from Zango, heading towards Fate.

The wagon with a little less than a dozen passengers skidded off the road, and got careened. No life was, lost, but some victims sustained serious injuries and had to be rushed to the University of Ilorin Teaching Hospital, Òkè-Oyi, for treatment.

Another one occured, on Monday, the 5th of July, this year again. This time, it involved a Toyota Hilux a van, driven by one Samuel Adeola of Hill Crest Company Ajase Ipo road  Offa,  and three tricycles operated by one Hafeez Nurudeen, of behind Palace Amoyo, Yusuf Kadiri of Agric junction Oloje and one Hussen Seriki of Gambari area Ilorin and  two persengers, namely  Abubakar Aliyu of Irewolede area and one Latifat Kamarudeen ‘F’  of Ganiki area both of Ilorin, according to a statement released by the State’s Police Public Relations officer, PPRO, SP Ajayi Okasanmi, and made available to newsmen.

[Video]
The accident occurred when the driver of the Hilux Van  and the tricycles coming from the  same direction  lost control and collided with the tricycles which resulted in a serious crash leading to  injuries, according to the police statement.

Again this writer narrowly escaped what could have been another ugly story of such avoidable accident at the same roundabout on Friday, 16th of July, 2021, coming from Zango and heading towards Shoprite.

The traffic from Maraba had been completely halted, except for one Toyota Corolla 2010, coming from Post office/Maraba area at a very high speed. It took the screaming by onlookers for the driver to know that he ought stop for the traffic on the left hand side.

With all these ugly incidents in memory, I decided to put a call through to the Kwara State Sector Commander of the Federal Road Safety Corps FRSC, Sector Commander, Mr. Jonathan Owoade, to narrate his ordeal, and to also offer a suggestion that, his organisation should advise the appropriate authority to construct speed bumps around that area, to reduce the speed of the traffic, with a view to reducing the rate of accident at the spot.

His response to the suggestion of speed bumps was that, it is not the responsibility of the FRSC, but that of the State’s agency in charge of traffic to advise the State government on where to put speed bumps. He added that, they, FRSC only work with whatever template the State Government gives them as it affects intracity traffic management.

Babatunde told me that, the State has no jurisdiction over federal road to such an extent that it begins to construct speed bumps on Trunk-A roads within the State.

Still undeterred, I put another call across to the Federal Controller of Works in Kwara State, Engineer Atitebi Kunle Wasiu, who the KWARTMA boss described as a friend. Having been briefed, Atitebi told me that, the Federal Ministry of Works and Housing does not encourage the construction of speed bumps on such a highway.

When he was reminded that, the spot in question is within the metropolis, he said “that is the more reason why I should direct my suggestion to the State Government, who would, in turn, direct it to the relevant agency, for necessary actions.

After this back-and-forth, I am compelled to ask; whose responsibility is it, to construct speed bumps on highway, federal or State, with a view to ensuring safety of road users?

Is this how the Federal and Kwara State Government are going to be playing the proverbial Russia Roulette with the lives of motorists and commuters in the State, till we witness another avoidable ugly incident of road traffic accident?

Meanwhile, there is the menace of the preponderance of tricycle operators, otherwise known as Kèké Maruwa. Those guys operate on Nigerian roads with their own code. They stop and park, wherever however and whenever they like, irrespective of the impact of such rashness on other road users and the entire traffic.
A journey from Gambari junction to Sobi/Shao, or Ọjà-Ọba to to Oko-Olówó, through Alore, Olojẹ and Ogidi, will shed more light.

And it seems neither the FRSC, nor KWARTMA has any answer to the danger, those merchants of traffic lawlessness, pose to public road users in the State.

Okada used to be commuters’ nightmare, but with these “Maruwa people on the highway, the only law that operates is lawlessness. And it is high time, managers of road traffic in Nigeria rose up to the occasion and safe road users from the anarchy.