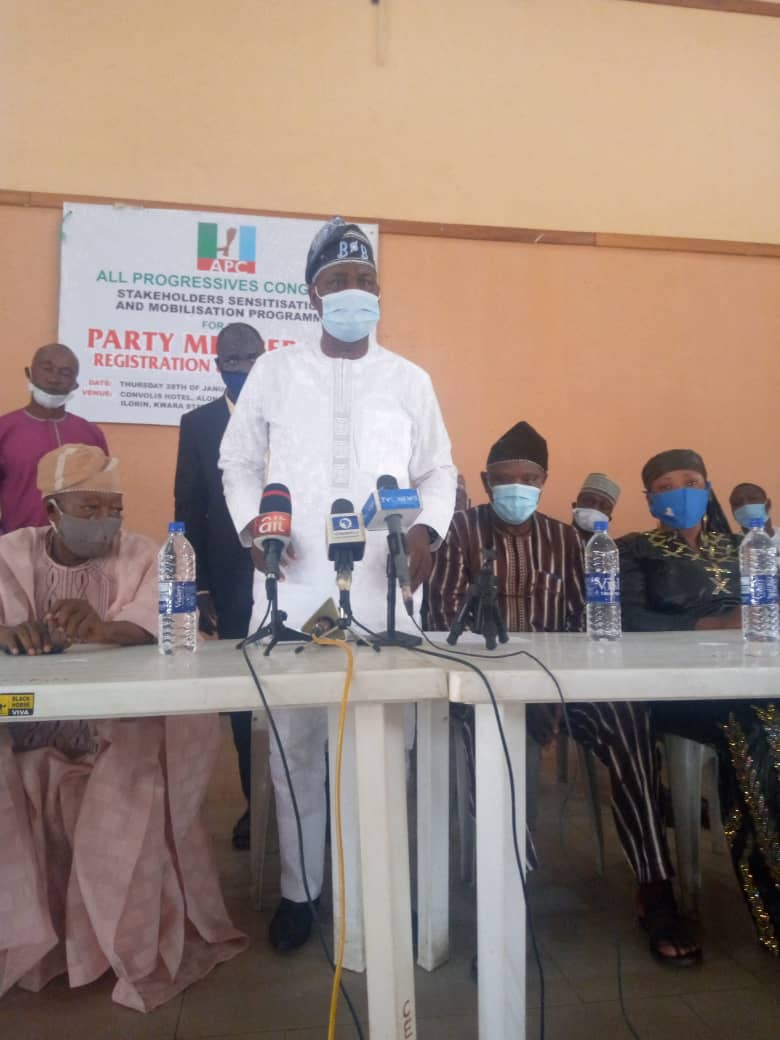 By Shafi Abdulrasheed
The Caretaker Chairman of the All Progressives Congress Kwara state chapter, Hon. Bashir Omolaja Bolarinwa has described the ongoing membership registration and revalidation exercise in Kwara as total sham.
Bashir Omolaja Bolarinwa made this disclosure while addressing the press in his Country home Agbeku, Agbeku Ward, Ifelodun Local Government area of the State.
The Chairman decried that, “the APC registration and revalidation exercise commenced on the 9th of February, 2021which today marked the 11th days the registration exercise has commenced, but today is the first day registration officials will be appearing at Market Square, Agbeku, Ifelodun LG.”
He added that, “I have been here quite a number of times and as at today, only eight members have been duly registered on the register for the first time.”
“It’s sad that, in Agunjin Ward there are eight units, and today it’s only one unit that we met APC registration officials. Leaving that aside, the entire local government of Ifelodun is also complaints galore”, the Chairman explained.
Hon. Bashir furthered that, since the exercise commenced, reports getting to him are of unavailability of officials at the authorized places all over the local governments; Offa, Isin, Irepodun, Oyun, Ilorin West, Asa, and Kwara North.
Speaking on the irregularities flanked the ongoing membership registration and revalidation exercise, he referenced to the 2019 when Bukola Saraki left the party and they’d to conduct fresh registration.  The executives ably led by my humble self conducted the registration seamlessly, and it was the same registration that laid foundation for the victory APC recorded which produced today’s governor.
In 2014 the intention of the leadership of the party to have decided members should register at unit the level was to increase the membership base of the party. In fact, it was one of the strategies adopted to made our party the ruling party Nigeria. It’s unfortunate this time around some people decided to deregistered members of the party rather than working to increase the membership base of the party, they are working for the membership base of our party to shrink.
It’s worthy of note that, all in the name of wanting to fill the gap for the registration, they are coming up with fictitious names using INEC register to fill up the register and tell them up there that they’ve members.
“We have written letters to Senator Danboi led committee on the inability to conduct an itch free registration exercise, but he turned deaf ears.
I used this opportunity to call on the national leadership of the party to send another registration team that’ll come and oversee the registration exercise in Kwara to be able to achieve the desired objectives of the party. The committee that will not be bias.
In a similar vein, Offa  Local Government Caretaker Chairman, Engr. Shittu Muyideen  described Kwara APC membership registration and revalidation exercise as a deregistering process. Adding that, members name are been written on foolscap sheet which against the national leadership directives.
Also speaking, the Caretaker Chairman of Ifelodun, Muhammed Shiloh Awobimpe bemoaned the registration exercise saying he’s only seeing the official registration book for the first time today. He noted that, they’d to appealed to the party Chairman Hon. Bashir Omolaja Bolarinwa to take after the likes of Adam Oshiomole, Chief Bisi Akande who have registered and aired their displeasure about the exercise.