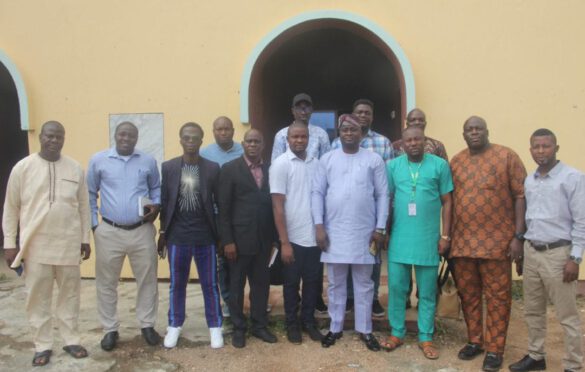 The chairman of the Nigerian Union of Journalists Osun state Council, Comrade Wasiu Ajadosu has lauded the Nigeria Guild of Investigative Journalists NGIJ on professionalism.

He gave the charge on Tuesday in the presence of the Council secretary, Comrade Bukola Elufadejin, when the team paid him and his excos a courtesy call at the NUJ Secretariat, Osogbo.

The team, led by one of the National executive of the Guild, Rowland Olonishuwa, had arrived Osogbo the state capital for a government assessment tour of the state.

Explaining the reason for the visit, Olonishuwa told the NUJ Chairman that members of the Guild were in town to feel the pulse of the people on the administration of Governor Gboyega Oyetola in over three years.

He explained that questionnaires to that effect had been distributed to artisans, market women, transport unions and other critical stakeholders in the state.

In his response, Comrade Ajadosu who said he was overwhelmed by the caliber of professionals on the team commended them for taking a bold step by coming down to the state to see things first-hand instead of engaging in armchair investigation.

He however advised the guild to always make report of their assessment tour to be a true reflection of what is on ground in the state so as to maintain the credibility and integrity of the group.

While wishing the Guild a wonderful stay in the state, he urged them to sustain the tempo so as to attract more professionals to the Guild.