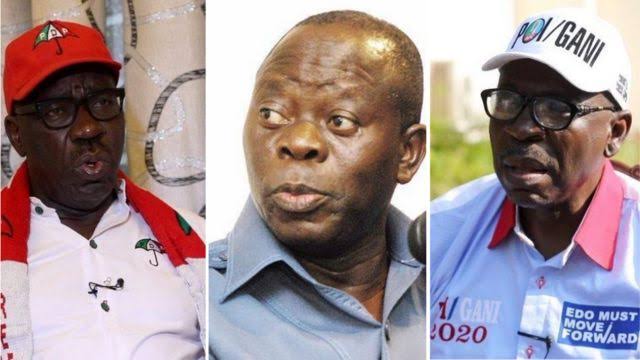 Regardless of who won or lost in the Edo election, it is clear that nothing lasts forever except trouble. No matter who wins or loses; trouble still comes around. I believe when great men fall, we should not laugh but learn”. There is a considerable number of lessons to be picked just like the ruins of a battlefield. In the end, men are not gods but human.

Edo State is indeed the handbook of karma on the part of Adams Oshiomole, the erstwhile National Chairman of the ruling party. It is also a pointer to the fact that a smart mouth can either save or kill and we should pay attention to how we run it.

While Adams Oshiomole is renowned for his *“war strategy,* Obaseki and his team were smart enough to abandon their *“intellectual strategy”* and embrace the *“crusade tactics”.

There is no appropriate term to tag what happened in Edo State other than a *“crusade”* or what else can you call *#EdoNoBeLagos.* It is shocking that a self-acclaimed political lion who constantly boasts of defeating the Kwara man was defeated by a political lizard. A lizard can defeat a lion if he stays too long in the euphemism of victory and builds a defensive formation that prevents him from seeing things from a holistic angle.

Such a lion will be ignorant of the fact that he is already defrauded of tactics in subsequent battles and change formation for subsequent ones. I believe the lessons have been learned by the man and the audience.

Oshiomole is synonymous with the Greek warrior named Achilles – whose most notable feats were the slaying of the Trojan Prince, Hector outside of Troy’s gate during the Trojan war. According to Greek mythology, Achilles also died before the end of the Trojan war. Epic stated Achilles was unassailable in all of his body except his heels because his mother “Thetis” dipped him in the river of immortality as an infant.

She held him by one of his heels which didn’t get to touch the river and served as the only vulnerable part of his body. Oshiomole had a strong constitution as APC Chairman but his mouth served as “Achilles heel” which eventually destroyed him.

The erstwhile Chairman of the ruling party boasts constantly of slaying many” Hectors” until his own death – to be found on the pages of history like Hector. Most accounts of Achilles portrayed him as a villain than a hero because he deprived himself of being remembered as a hero by not abandoning his grievances to protect his legacy.

Who could have imagined that Adams would be stripped naked in his own garden – the same Adams that heavily invested in turning others kinsmen against them was abandoned by his own kinsmen? The influencer in the circumstances is no other thing but karma – and incredibly – it acts faster than expected. An earthquake that shook up the political landscape of Edo State, perhaps to its foundation, swallowed him. So crowd in campaigns does not always translate to victory at the polls?

Many Edolites actually came out to enjoy the political drama orchestrated by the former labour rights advocate.

Oshiomole didn’t fight with a grounded reason and his followers will suffer for it. The most shocking thing on Ize-Iyamu’s part was the devilish marriage he had with Oshiomole in the name of occupying government house.

Oshiomole is not someone he should have courted in his wildest dreams. He should have been mindful of an adage that “when you bury your past, avoid friends with a shovel”. The same man that shoveled Iyamu’s past did the same to Obaseki on his certificates.

There is no better handbook on karma than the just concluded Edo state election. When you are digging the grave of your enemies, thread softly. People who can’t be our friends, we should make it difficult for them to become our enemy.

This is also a lesson to those that speak on electronic media to gauge their mouth. It is now evident that where “mouth” can reach, the leg can never reach there. That you are with someone today doesn’t mean you can’t be with the other person tomorrow. Guide your mouth in defense of yesterday, today, and for posterity.

This is equally a wake-up call to writers. Whatever is written and printed has a potential life span of 100 years before disappearing. *A pen in the hand of a fool is more dangerous than a gun in the hand of a mad man.*

*Conclusively, if Area fit kill Jesus, who be Reverend Father?*