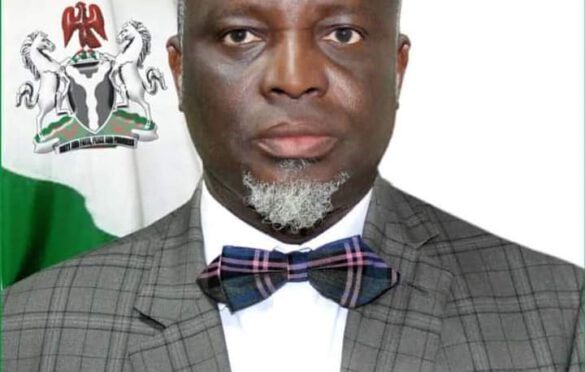 This Friday, May 20, 2022, in Lagos, drums would be rolled out, cymbals would chime, heads would turn in jaw-dropping celebration of excellence as the high-flying Registrar of the Joint Admissions and Matriculation Board (JAMB) bags The Vanguard’s Icon of Education award.

Even though the newspaper is honouring the erudite scholar in his capacity as JAMB Registrar, one of the criteria that qualified him for the award of the 2021 ‘Public Sector (Education) Icon’ was his achievements while serving as Vice-Chancellor of the University of Ilorin, the nation’s most sought-after citadel of learning !

At the award ceremony, which holds at the Eko Hotel and Suites, Prof. Oloyede will be standing on the dais with other prominent Nigerian achievers that include captains of industries, politicians, bankers, and big players in the country’s political and economic spheres.

In the letter of award signed by the Editor of The Vanguard Newspaper, Mr. Eze Anaba, the JAMB Registrar was informed that “this award is in recognition of your exceptional contributions to nation-building, particularly in the education sector, where you not only made a name for yourself, but also made Nigeria proud. You achieved fame since 2007 when you became Vice-Chancellor of the University of Ilorin. Your tenure is outstanding in the annals of the university because in just five years, you transformed it and made it the most sought-after university in Nigeria”.

Mr. Anaba continued, “… as Registrar/CEO of JAMB, your achievements in reorganising and cleaning the proverbial augean stable, coupled with unprecedented financial prudence, which saw remittance of funds back to federal coffers, are indeed worthy of commendation. These, and more, which space do not permit us to list in this letter are what commend you for this award”.

The newspaper editor further explained that “the history of a united Nigeria will not be complete without a copious mention of your dedication and commitment to our fatherland”, adding that “the philosophy of this award is to recognise and celebrate Excellence, National Pride and Service to Humanity”.

This award is a brand new feather to Prof. Oloyede’s over-decorated cap of honours. And it doesn’t come as a surprise to the watchers of the erudite Professor of Islamic Jurisprudence’s legendary records of selfless service to humanity.

Before now, Prof. Oloyede has received scores of awards in recognition of his sterling achievements in public service. These include the Natonal Productivity Order of Merit (NIPOM) award (2019); The Sun Newspaper’s Public Service Award for 2018 “for being an exemplary public servant with zero tolerance for corruption and setting up a new order of transparency in the running of JAMB”; Leadership Newspaper award for JAMB as “Government Agency of the Year, 2018”, among several others; as well as special parliamentary commendation by members of the House of Representatives (2019).

And just recently, the JAMB Registrar was formally recognised by the United Nations Educational, Scientific and Cultural Organization (UNESCO) as the ‘Best Advocate of Equal Opportunity in Higher Education in Africa’. The UNESCO accolade is a worthy recognition for Prof. Oloyede’s fertile repertoire of innovation, an attribute that has made JAMB the veritable trail-blazer among the nation’s public institutions.

No wonder he was reappointed for another term of five years in 2021 at the expiration of his first term.

To be sure, this erudite scholar is fast becoming the face of
the new Nigeria we all fervently pray and yearn for! And as the country begins another frenetic search for new set of leaders come 2023, it would not be out of place to recommend the Oloyede magical persona as a veritable template for an ideal new national leadership. For, his entire public service life is full of great lessons for incumbent and aspiring leaders!

So, as he walks up the dais this beautiful Friday evening to be adorned with the garlands of honour, we congratulate this outstanding Unilorite on his attainments so far. We pray for more powers to his elbow in the firm belief that he still has more to offer Nigeria and humanity in general.

*Akogun is the Director, Corporate Affairs, University of Ilorin