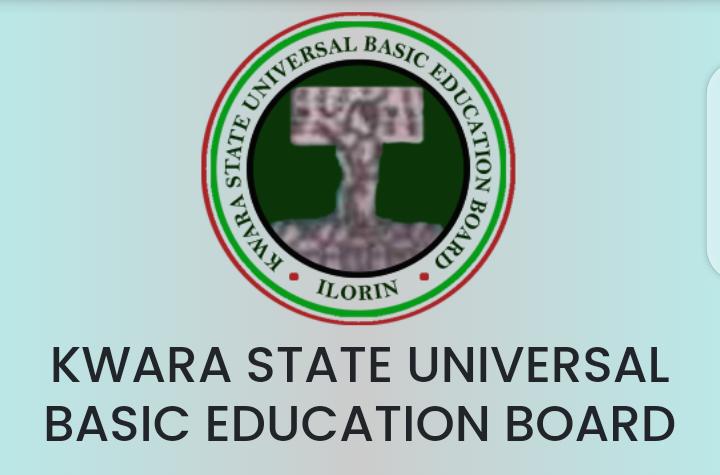 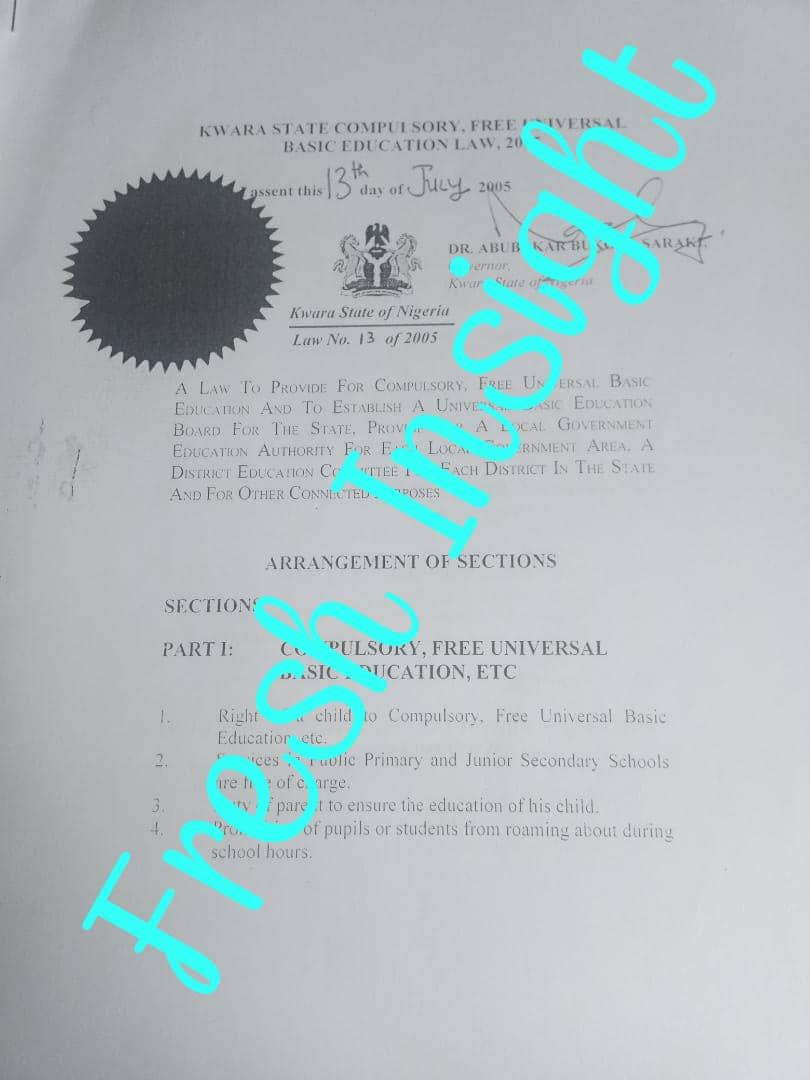 The State Universal Basic Education Board (SUBEB), an offshoot of UBEC in the States, is established to address the inequality in educational opportunity at the basic level and improving the quality of its provision.

The programme was introduced by the Federal government to remove distortions and inconsistencies in basic education delivery and reinforce the implementation of the National Policy on Education as well as to ensure access, equity and quality of basic education throughout the country.

The Law, also vested the power to carry out recruitment, appointment, promotion and discipline of teaching and non-teaching staff on salary grade level 07 and above in the ‘Board’. Including the power to post and deploy staff, be it interstate, inter-local government and inter-service transfers.

Section 16 (1) c, of the Law reads, “The function of the Board shall be to carry out the recruitment, appointment, promotion and discipline of teaching and non-teaching staff on salary grade level 07 and above.

If the provision of this law is anything to go by, then the ongoing recruitment exercise of SUBEB teachers and posting of local government staff to the class room, runs contrary to the provision of the law, as the only body empowered to carry out such exercise is the Board, which remains unconstituted till date.

According to a letter dated 15th, December 2020, exclusively obtained by Fresh Insight and signed on behalf of the Governor, by his Special Adviser, Special Duties Hon. Yinka Aluko with reference number SASD/KWSUBEB/013/VOL.1/013, and addressed to the Director of Administration, Kwara SUBEB, the State government advised all Education Secretaries, to as a matter of urgency, decongest LGEA offices with a view to posting them to schools where there is human resources deficiency. A move that amounts to usurpation of the functions of the Board as provided for by the extant law in Section 16 (1) d, which deals with the posting and deployment of staff.

The letter reads, “attention of the State Government has been drawn to the fact that the State Universal Basic Education Board teaching staff are highly congested in the metro at the detriment of rural schools. Similarly, the State government is not unaware of the congested LGEA offices, leaving schools to suffer deficiency of teaching staffs.

“Arising from the foregoing, you are advised to direct all Education Secretaries to as a matter of urgency, decongest all LGEA offices with a view to posting them to teach in schools.

” Furthermore, you are advised to redistribute SUBEB teaching staff from highly populated areas to areas (schools) of deficiency.

“In addition, you (sic) requested to attach importance to posting more teaching staff to our schools outside the metros and rural areas. You are urged to comply with the above, please” it reads. 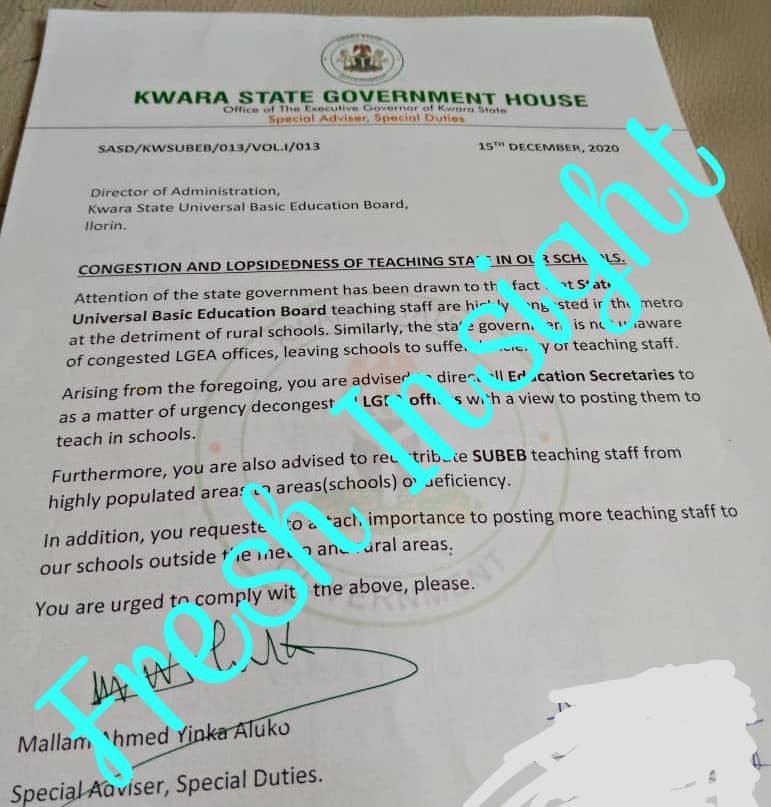 In a letter signed by Director Human Resources of Ilorin West SUBEB, Mall. Baba Z.J, exclusively obtained by Fresh Insight, it was discovered that the Director Administration of Kwara SUBEB also flagrantly flouted the Law by carrying out the instructions of the Governor in usurpation of the Board’s functions, “sequel to His Excellency’s approval vide Ref. No. KWSUBEB/SUB/79/VOL.11/131 dated 15th Jan, 2021 to decongest the LGEA SUBEB Offices, I am directed to covey the Board’s approval of your posting to…., with immediate effect.” The letter further states, “The Board should be informed of your assumption/assumption of duty immediately” it reads. 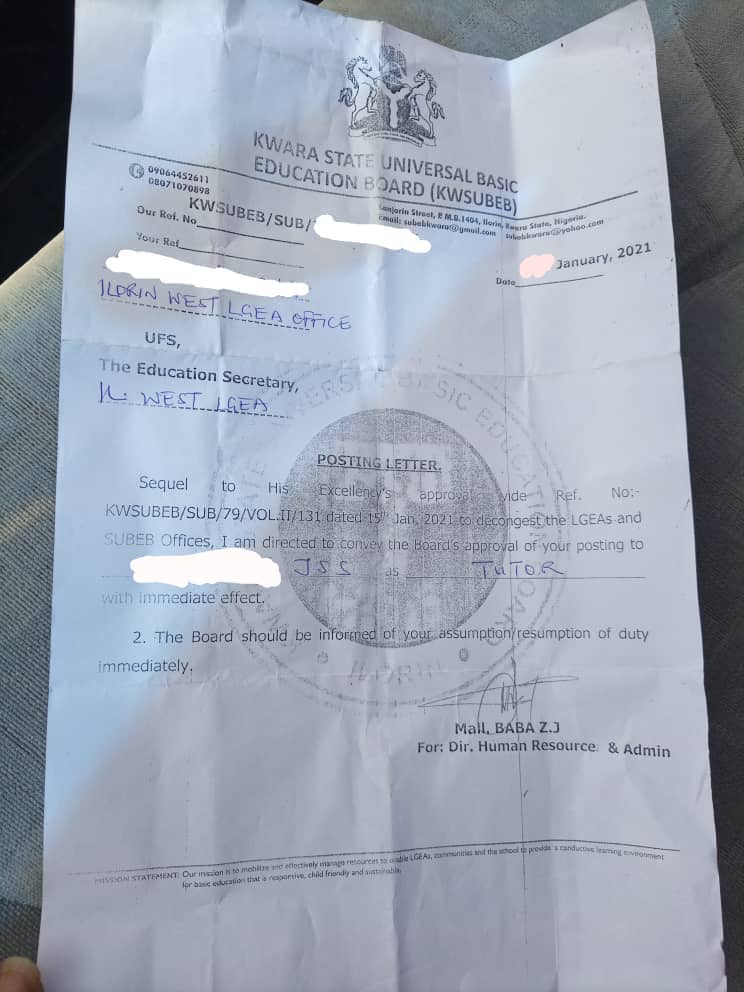 As against the allusion in the posting letter as signed Mall. Baba Z.J wherein he relied on a nonexistent “Board’s approval”, as at the time of the posting there was no properly constituted board.

It is also the exclusive reserve of the Board, to receive grant from the Universal Basic Education Commission (UBEC) and disburse same in accordance with agreed formula to the Local Government Education Authorities. It is also legally saddled with the responsibility of providing basic education facilities in the State, including physical structures.

Section 16 (1) e, of the Law states, ” The function of the board shall be to receive grants from the Commission and disburse same in accordance with agreed formula to the local government education authorities.

Section 16 (1) I, further states,”The function of the Board shall be to undertake capital projects in schools”.

While the Board Chairman is expected to be the Chief Executive and Accounting Officer of the Board, the Executive Secretary is supposed to be the Administrative Head. However, neither the legally recognized Chief Executive and Accounting Officer nor the Administrative Head of the Board has been appointed by Governor AbdulRahman AbdulRazaq, One year and eight months since his coming onboard, yet carrying out some functions against extant laws.

The Governor has continued to carry on all activities, for which SUBEB are lawfully empowered to carry on. The vacuum in Kwara State Universal Basic Education Board, since inception of AbdulRazaq’s government is left unfilled.

Rather, the Board is a shadow of itself, under the supervision of SUBEB’s most senior civil servant; Director Administration, Adebisi Gloria (Mrs).

In 2019 through 2020, Gov. AbdulRazaq, in defiance to the SUBEB Law, embarked on rehabilitation of some Basic schools, in flagrant disobedience to section 16 (1)(k)(ii), which saddles SUBEB with the responsibility of “provision of adequate basic education facilities, including physical structures.”

Fresh Insight findings also revealed that, despite the promising nature of the ongoing recruitment exercise of teachers into the Teaching Service Commission and SUBEB, while the TESCOM recruitment may be lawful, because the Commission is constituted. Same cannot be said of SUBEB teachers recruitment. it is outrightly illegal. According to extant laws, the Governor has no such power to recruit, appoint or post Teachers under the UBE scheme, if section 16 (1)(c) is anything to go by.

The section clearly provides that, only properly constituted Board for the UBE have power to carryout such functions as recruitment and appointment of teachers.

Fresh Insight’s further findings also revealed that the sack of over 2,000 sunset workers, who falls in basic education category, by the Kwara State government may be grossly illegal. Section 19 of the Compulsory, Free, Universal Basic Education Law empowers the Board, which is currently not constituted, to appoint, engage, employ or dismiss such officers or employees as it may consider necessary for the proper and effective conduct of the business of the Board (basic education).

Morally speaking, successive and present government have always maintained that SUBEB Teachers are not their workforce, but that of the local governments, especially during salary crises.

It is therefore defective that the same State government that excuses itself from SUBEB liabilities are same recruiting into it and even managing its finances (grants disbursed to it) on its behalf. More so, in the absence of properly constituted Board.

The Universal Basic Education Commission might be a culprit in this illegal complicity of Kwara State government. It is expected that UBEC would be diligent enough, to ensure it operates with States within the permissible legal frameworks. Reverse however is the case, UBEC released N7 billion (N7,151,142,190) to the Kwara state government (not the Board), in contravention of the SUBEB Law.

The absence of a properly constituted Board for SUBEB in Kwara state, which is the only body legally recognized recipient of grant from UBEC, according to section 16 (1)(e) of the Law, pose questions of due process, transparency and accountability in the utilization of the N7.1Billion UBEC grant.