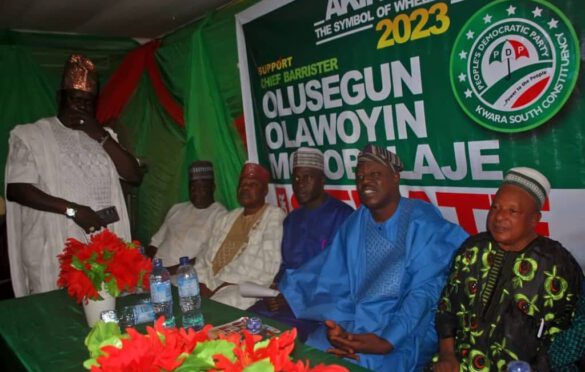 As the 2023 general elections draws nearer, more aspirants have continue to throw their weight into the rings to via for various elective posts.

Prominent among those to have publicly declared intention to contest is the political scion of the late J.S Olawoyin family, Barr. Segun Olawoyin who yesterday during the posthumous birthday celebration of his father, J.S Olawoyin who was a ranking Awolowo ally during his time, expressed his intention to represent the Kwara South Senatorial District at the red chambers of the National Assembly.

Olawoyin while addressing the gathering said “I am Chief Olusegun Oluwatoyin Olawoyin and I am here to make it known that I am ready to offer myself in service to the good people of Kwara South Senatorial District. I wish to begin the journey as expected by seeking the PDP senatorial nomination.”

“It is for this reason that I come forward to make my intention known to all. I am interested in becoming a member of the Nigerian Senate to represent the Kwara South Senatorial district’ he said while the audience greeted this with a thunderous applause.

“awmaking has taken a different dimension and only those with the requisite skills, aptitude should represent us in the Red Chambers.

“I have been an integral part of the system and I am well aware of the agonies of our people.”

“My focus when chosen by God and the people and, I finally win the election, is to use my exposure in the public service over the years as well as extensive networking to highlight these needs to the appropriate authorities. I also desire to propose bills that will add value to our people through creative policies” he added.