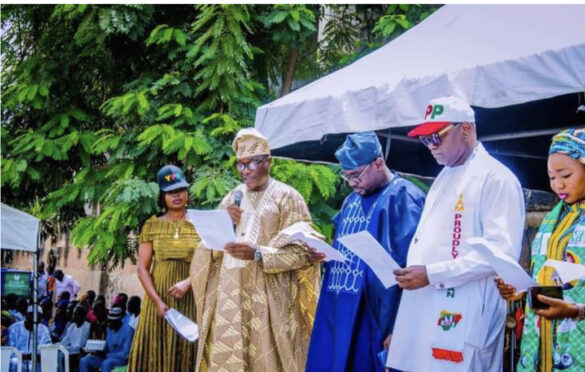 The Kwara State chapter of Young  Progressive Party (YPP) has elected chief Dele Ogunbayo as its new State Chairman, who was elected via consensus at the party’s convention held at its party secretariat earlier today in Ilorin, Kwara State.

It would be recalled Ogunbayo, who was the Chairman of the All Progressives Congress (APC) in Isin local government area of Kwara State, was also the Chairman of all Chairmen, before his resignation from the party last year and his subsequent decamping to YPP

Ogunbayo who is taking over from Comr. Charles Afolayan while reading his acceptance speech said “I am highly delighted to be elected as the Kwara State Party Chairman of Young Progressives Party (YPP). Let me say it before this very large gathering of men and women, old and young that I will not derail from the principles we have been following to pilot the affairs of this party.
“It is very important to remind all of us that, we are all in a race that must be won, let us work with all we have and make sure the party win 2023 elections. I need to plead to all that we must not hold grudges Shao one another” he stressed.
On his part, the immediate past Chairman of the Party, Charles Afolayan congratulated the newly party executives, Charged them to work collectively to ensure the victory of the party at the 2023 Polls.