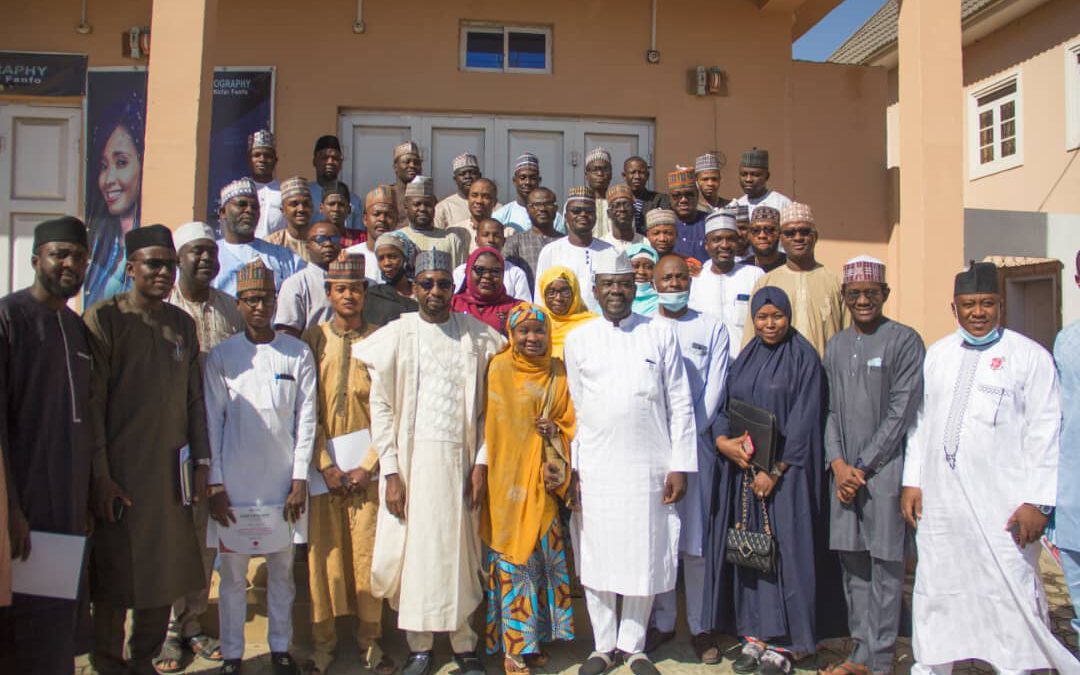 The Director-General, National Information Technology Development Agency (NITDA), Kashifu Inuwa Abdullahi has reiterated that the Agency have an ambitious target to achieve 95 percent digital literacy by 2030, revealing its readiness to work with journalists and other organisations to see how digital literacy can be promoted, considering the greatest resource it would afford Nigerians opportunity to thrive and survive in the digital era.

The NITDA Boss made this known on Friday at the just concluded digital journalism workshop held for Journalists in Kano.

The workshop with the theme “Digital Journalism, Media Ethics and Responsible Reporting” was jointly organized by Image Merchants Promotion Limited, publishers of PRNigeria and the Penlight Centre for Investigative Reporting  with the supports of NITDA.

Kashifu said “Today, courtesy of the internet and social media, fake news travels 15 times faster than the factual stories, which is a great threat to journalism. So training like these would help media professionals to help mitigate this threat.

“We at NITDA, have an ambitious target to achieve 95 percent digital literacy by 2030. We are going to work with journalists and other organisations to see how we can promote digital literacy because it is the greatest resource you can have to thrive and survive in the digital era.

“We are in the era of the knowledge-based economy – digital economy whereby what is underneath us doesn’t matter as what we know – the talent we have and the media has the greatest tool to help our country achieve that”, he added.

Speaking on cybersecurity in Nigeria, Kashifu said the government had put in place structures to protect the ecosystem under its strategic roadmap and action plans.

He said: “Cybersecurity is one of the strategic pillar under our strategic roadmap and action plan which is more about social engineering. So, we do three things. We do a lot of awareness so that people need to know the do and don’ts of social media. That’s what will hold them to protect confidential information.

“Secondly, we have a centre called the computer emergency readiness and response centre working round the clock to make sure we proactively protect our digital space. We help MDAs, private organisations and individuals to protect the data and information.”

He further revealed that the agency has people trying to get inside from what’s happening in the deep web and dark web all in an effort to proactively protect the country adding that a team of professionals are also on standby to help people restore their services in case their system is compromised.

Earlier, the IMPR boss, Malam Yushau A. Shuaib, said the workshop was to acquaint journalists and social media influencers with the appropriate digital tools to promote professional standards and enhance their jobs.

Shuaib said over 100 journalists have benefitted from the 3-Days training that was hosted in Abuja, Kwara and Kano States. He added that some of the topics at the workshop included: Digital Journalism for tackling Fake News Menace; Media Ethics and Responsible Reporting, Open Source Intelligence Tools (OSINT), Media Monitoring and Search Engine Optimization, Self-Censorship and National Security, Media management among others.

At the end of the workshop, the NITDA DG, Mr. Kashifu Inuwa was presented with the ‘ICT Personality of the year award’ by the Network of Advocates for Digital Reporting (NADIR), a forum of journalists covering the ICT sector.

Meanwhile, at the end of the workshop, the participants (Journalists) noted that there are expectations on the media, government, regulatory authorities, and the members of the public to achieve ethical and responsible online journalism.

In a communique signed by Isiyaku Ahmed, It was observed that digital technology is critical to the professional practice of journalism, especially in the adoption of digital tools to carry out fact-checking and investigative reportage.

Therefore, the importance of formulating appropriate regulation to guide the practice of online and citizenship journalism, and self-censorship to promote patriotism and national security. They noted that it is imperative for media practitioners to embrace ethical standards and conduct in their reportage to meet global best practices.

While commending the organizers and sponsors of the training programme, especially the Minister of Communication and Digital Economy, Professor Ali Isa Pantami who has been in the forefront in advocating for the use of digital tools for economic development, they expressed optimism that this initiative will be sustained as part of steps to guarantee responsible online journalism, national security, and growth of the digital economy.

In their determination to ensure the practice of a digitally driven, ethically responsible and development conscious online journalism, the participants pledged to ensure that 20 per cent of their reports will focus on creating awareness on digital literacy and inclusion; demonstrate practical use of digital tools for fact-checking, investigative and developmental journalism as well as promote national unity and cohesion and as well actively participate and attend periodic training and other relevant institutions to regularly upgrade their skills in online journalism, as well as stepping down the knowledge to colleagues.

One dead, others injured in Ilorin fatal accident