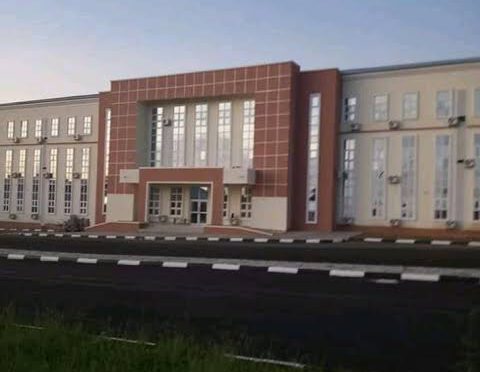 Almost three years after taking delivery of the keys to the completed new State Secretariat on Ahmadu Bello way, GRA, Ilorin, the AbdulRahman AbdulRazaq-led Kwara state government is yet to pay contractors for completion of the inherited project which was at 70% completion at the beginning of the administration in 2019, Fresh Insight can authoritatively report.

It would further be recalled that sometime in July, 2019, 2months into the administration of AbdulRazaq, the Governor met with the contractors, negotiated a #50million discount on the project and persuaded the contractors to continue with the job, with promise to pay their balances upon completion.

According to a statement on July 10, 2019 by the governor’s Chief Press Secretary, Rafiu Ajakaye, “Gov. AbdulRazaq secured a discount of N50 million from the contractors who were being owed N515 million out of the N1.38 billion total contract sum.”

Ajakaiye also said “The Governor approved the release of N350m with which the contractors will finish the work and they will receive N81m after the work is satisfactorily done. Which would leave them with the retention fee of N34m to be paid after six months.”

However, Fresh Insight’s investigations revealed that as against Gov. AbdulRazaq’s promise, the contractors received no dime from the government, a development that resulted in the contractors’ inability to pay Obitek Nigeria Limited, from whom credit supply was secured to complete the job.

It was gathered that Obitek Nigeria Limited was forced to drag the 3 companies to court. The case was filed before Kwara state High Court before Justice SM Akanbi in suit nos 273, 280 and 281.

Fresh Insight’s gathered that the contractors had appealed to Gov. AbdulRazaq personally, wrote to appeal to him through the Head of Service and also Commissioner for Works, for release of their monies. All these efforts however appeared to fall on the Governor’s deaf ears as the State government refused to pay the debt.

As a result of the inability of these contractors to pay debts owed for supply of electrical appliances to the Kwara state government secretariat, Obitek Nigeria Limited dragged Messers Aron, Henry George and Tangent before the Kwara state High Court.

The case filed before Kwara state High Court is before Justice S. M. Akanbi in suit nos 273, 280 and 281. The three companies later joined the Government and Attorney General of Kwara state in the same suit, as the primary debtor who occasioned the debt owed Obitek by the contractors.

These cases were later consolidated by the Court on 25th January, 2022 and over a year after, the Kwara state Government has filed no response.

On Thursday, 24th February, 2022, Fresh Insight’s correspondent who monitored the Court proceeding reports that Counsel to the Claimants, Dr. H. A. Ahmed informed the court of the notice of preliminary objection served on him by the Government and Attorney General of Kwara state, who were 2nd and 3rd defendants, wherein they prayed the Court dismiss the case against them, as they weren’t party to the contract between Obitek and the three contractors.

Counsel representing the 3 companies, Barr. I. M. Adedo also informed the court of the receipt of similar notice. In the objection, the Kwara state Government admitted to owing the three companies.

The Government and Attorney General of Kwara state who were being represented by M.A.Z Usman (Mrs), a senior State Counsel, however claimed not to be aware of the consolidation of the case.

The allegation that made the Court return to its records when it was discovered that the said counsel to the State Government was actually in Court on the last adjourned date (25th January, 2022) to represent the Attorney General and Kwara state government in suit number 281 and it was in her presence that the order for the joinder of the remaining the suits were made, as well as the order for consolidation.

However, the court ordered that the order for consolidation be served on the Kwara state Government again.

The case was adjourned to 12th May, 2022 for hearing of the objection filed by the Kwara state Government.

When contacted, the CPS to the Governor – Rafiu Ajakaiye directed our correspondent to the Ministry of Works. Efforts to get reaction of the State Commissioner for Works – Rotimi Iliasu was however futile as he did not respond to messages sent to his phone.

When contacted, the Press Secretary, Ministry of Works – Mr. Bola Onile said he is not privy to the development but would get information about it and revert to our correspondent.