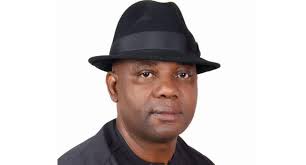 A pro-APC youths group in Kwara state,.under the aegis of concerned APC youth stakeholders has described the Deputy National Publicity Secretary of the party, Yekini Nabena as a Charlatan, whose recent vituperation over irregularities in the APC registration and revalidation exercise in Kwara state reflects ‘propensity for unfairness and injustice.

This is contained in a press statement issued by the group and obtained by Fresh Insight Newspaper. The statement reads;

“The attention of the Concerned Youth Stakeholders of Kwara state All Progressives Congress was drawn to an unfortunate and utterly misleading statement credited to the person of one Yekini Nabena, who was said to be speaking on behalf of the National Headquarters of APC Caretaker Committee, and an attack which he launched upon our revered Father and one of the foremost Leader and founding fathers of the All Progressives Congress in Nigeria, in his desperate bid to massage some people’s political ego.”

“The statement credited to Nabena did not only show his propensity for unfairness and injustice, but also quite unfortunate that the attack is coming at a time our internal democracy needs to be strengthened for unity and cohesion of the Party, to make it viable ahead of future elections. We are however not surprised understanding Nabena’s records of greed and desperation, which made him openly attack the leadership of the APC and Lanre Issa Onilu, after he failed in his plots to replace Bolaji Abdullahi as National Publicity Secretary.”

“This time however, it is utterly shameful and condemnable that the said Yekini Nabena is making comments ignorantly on the ongoing charades witnessed in Kwara state, in the name APC Membership Registration and Revalidation Exercise.

Ordinarily, we wouldn’t have needed to give any response to a revered mischief maker, irrelevant paper weight politician and pursuer of personal aggrandizements in APC, who has overstayed his usefulness as the Former Deputy National Publicity Secretary of the Party, but is important to expose a scavenger, fond of using the National Headquarters as a house to hatch dirty jobs of his sponsors with very sinister motives.”

“The said Nabena has overtime been an accomplished mischief maker and irritant who has never enjoyed promotion and has always been a deputy to every spokesman of the National Headquarters of our great party. Since the exit of Sen. BUkola Saraki in APC, He is widely known for chasing Shadows and always known for executing hatchet job for some high stuffed pocketed Politician.”

“We therefore see his statement as reckless and a cry from a charlatan in an Emperor’s garb. We urge him to keep his disheveled body and stinking mouth away from the Honorable Minister. This should be taken as a candid advise and in good faith. He should stop grovelling for crumbs from where he hustles.

We should however note that Alhaji Lai Muhammed stands for what is right. He had called for legality, fairness and justice for all, as expected from every sane and conscious mind in view of the sham witnessed in the ongoing membership registration in Kwara state. The Honorable Minister has been a respected Leader of strong conscience, a character worthy of emulation with fecund mind and at not time has he tried to Lord himself over the government of AbdulRazaq or any of his cohorts. And never has he borne any form of grudges against Governor AbdulRahman AbdulRazaq, reverse however is the case.”

“1. That the Honorable Minister deserves respect from all, particularly the National Headquarters of our great party. He was one of the founding fathers of APC and should be treated with absolute dignity. We therefore demand an apology from the malodorous ranter, in person of Yekini Nabena.”

“2. The dinosaur nosed urchin, who is not known to Kwara state but obviously fed false tales by the usual suspects  claimed the  Honorable Minister does not have a single achievement since his appointment in 2015 and eventual reappointment in 2019. We dare say, it is false in its entirety. That the Honorable Minister does not want to dignify Yekini Nabena with a response is an act of serenity which is lost in the rants of a caustic urchin crying for crumbs.  It is noteworthy that Alhaji Lai has facilitated many jobs, appointments to Kwarans and as well impacted lives meaningfully and positively through facilitation of physical projects.”

3. We regret to ask Yekini Nabena these questions;

a) Has this caustic fellow’s life taken any progression since his infamy?

b) Why are you still hanging arround Abuja instead of attempting to achieve one eighth of what Alhaji Lai Muhammed has achieved in his life time?

c) Why are you still using the office of the Deputy National Publicity Secretary of APC to embark on your known hatched errands knowingfully well that the NEC had dissolved the NWC by a resolution of Dec 8, 2020. Are you truly not an Imposter?

d) Tell us your contribution to the party since its inception and not the countless and needless rants of a political jobber like you to defame the party on several occasions.

e) What is your capacity in the party in your homestate?

Until Yekini Nabena is able to answer these questions, then we can treat his words seriously, free from the usual rants we get from him.

It would also be of great importance, if the Governor Mai Mala Buni led CECPC can clear the air about who really is the National Caretaker Publicity Secretary of our great Party.

If by neccesity, the National Caretaker Committe needs to communicate us in Kwara APC, they should be able to do that in clear terms either from the office of Chairman or the Secretary of the committee, and not by an impostor who is dishing out attacks on our party Leaders in the state.

Unless order and sensibility is returned back to our Party, we regret to predict that our great Party will be shown in bad light to the entire Nigerian Citizenry as a Party that openly disrespects its Constitution, Guidelines and Membership.

We believe in strong terms that the Electoral victory of APGA in the Niger State Senatorial Elections is a very pertinent “handwriting on the wall” telling the Leadership of our great Party at all Levels, that we have being weighed and found wanting. It will be foolishness, if we all fail to act accordingly as this will entail a situation no Loyal Supporter of APC prays for.

“A stitch in time, saves nine.