Barring any last minutes change of mind, the workers under the banner of the Nigerian Labour Congress, Kwara State chapter will embark on an indefinite strike tomorrow (Tuesday) in demand for the implementation of the #30,000 minimum wage.
This was the outcome of the meeting held by the organised labour including TUC, NLC, JNC to review the government stand of the issue.
The meeting which held at the labour house rose few minutes ago with the agreement to embark on indefinite strike until the demands of the workers are met.

The communique which was jointly signed by Alh. Issa Ore (NLC Chairman), Ezekiel Adegoke (Ag. TUC Chairman) and Saliu Suleiman (JNC) enjoined workers across board to comply with the directive by staying at home. 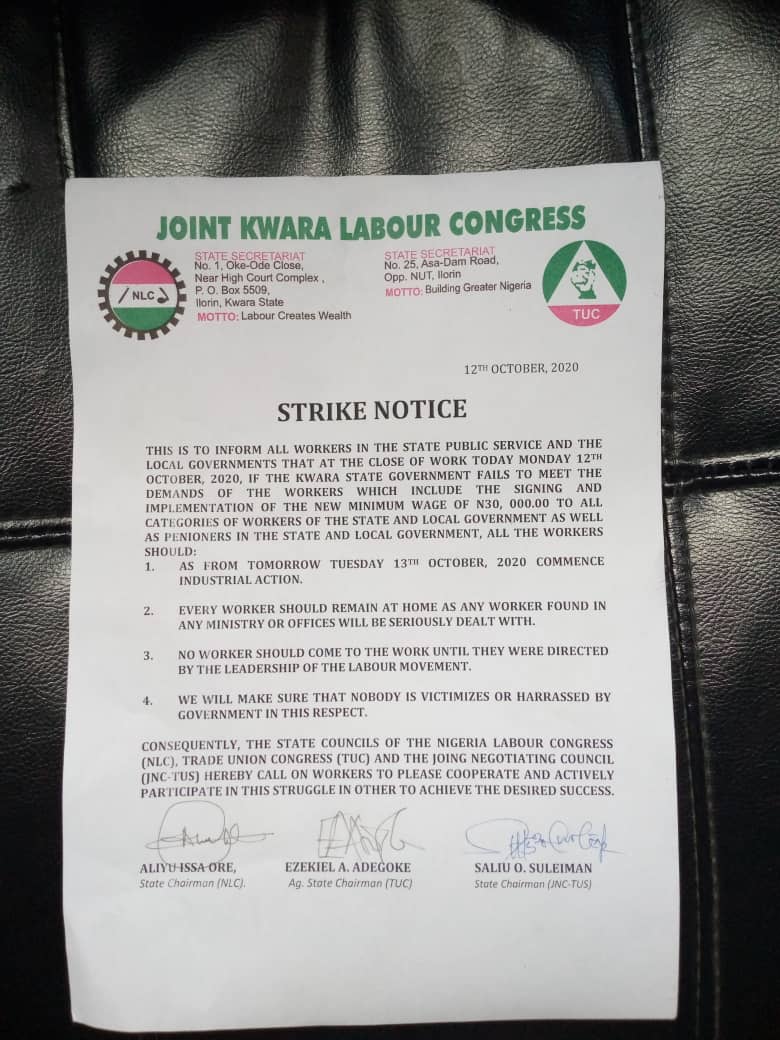 Meanwhile, a pan-northern Nigeria group, Gamji Members Association of Kwara State (GAMA) has cautioned the organized labour in Kwara against embarking on strike.

The group, whose members espouse the ideals of Sir Ahmadu Bello, the late Sardauna of Sokoto and Premier of northern region, said on Sunday that while it understands the plights of workers in the State, especially the rising cost of living; the fact that the government of Mallam Abdulrahman Abdulrazak has demonstrated good faith and commitment to welfare of workers is not lost on all patriotic Kwarans.

“The government, whatever its imperfections, has shown good faith in handling workers’ welfare social investments, and infrastructural development, even during COVID-19 when it never stopped paying or cut workers’ salaries like a few states did,” a part of the statement signed by the Publicity Secretary of the group, Alhaji Abdullahi Yinka Agaka, read.

While appealing to the workers to embrace dialogue, considering that that the finances of the State government was already overstretched, GAMA said strike action at this point would hurt everyone.