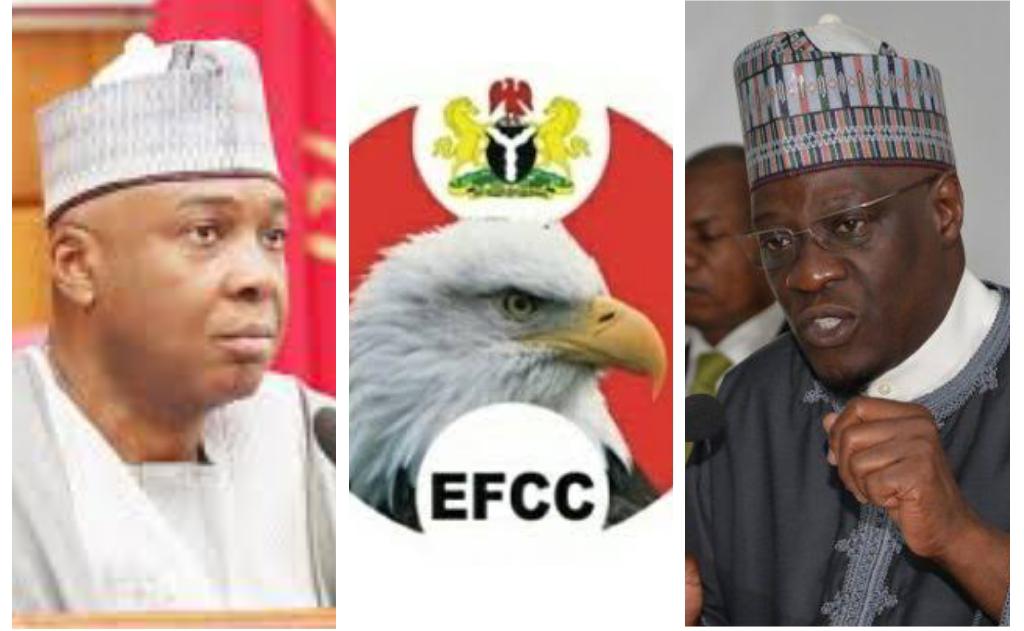 Barring any last minute changes, the former Governor of Kwara State, Dr. Abdulfatah Ahmed will for the second consecutive time again spend the night at the EFCC, Abuja, owing to his inability to perfect his bail conditions, Fresh Insight can exclusively report.

According to Fresh Insight’s investigation, Dr. Abdulfatah Ahmed is being investigated by the Economic and Financial Crimes Commission (EFCC) in relation to the tax consultancy works of FIRMUS COM ENTERPRISES, a company rumoured to be owned by cronies of the former Senate President of the Country, Dr. Bukola Saraki.

It would be recalled news had filtered in the media of the invitation and grilling of the banker turned politician, the former Governor confirmed same via his twitter handle, shortly after he was released by the EFCC, today.

Ahmed said “In response to an invitation by the commission via a letter dated 26th April 2021, I voluntarily visited the EFCC in Abuja yesterday with regard to a complaint about a contract awarded by Kwara State Government while I was the State Commissioner for Finance. I was not accused of any wrongdoing. Neither was I questioned about any N9b transaction. I have since been granted bail.”

Fresh Insight had however, exclusively reported his spending the night in the EFCC custody owing largely to his inability to meet the stringent bail conditions yesterday.

According to an invitation letter written by the EFCC to former Gov. Ahmed and exclusively obtained by Fresh Insight is not unconnected with the management of revenue accrue to the State via Internally Generated Revenue (IGR), under the defunct Board of Internal Revenue (BIR). 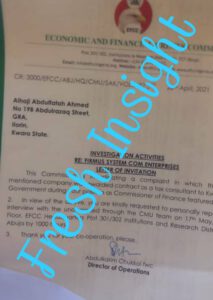 According to the letter dated 26th April, 2021, with reference number CR: 3000/EFCC/ABJ/HQ/CMU/SAK/VOL.2/003 and signed by the Commission’s Director of Operations, Abdulkarim Chukkai fwc, Director of Operations read in part; “This Commission is investigating a complaint in which the mentioned company was awarded contract as a tax consultant to Kwara state Government during your position as Commissioner for Finance featured.

“In view of the above, you are kindly requested to personally report for an interview with the undersigned through the CMU team on 17th May, 2021”.

An anonymous source had earlier told Fresh Insight that “He (Ahmed) was invited for questioning with regards to management of Internally Generated Revenue (IGR) of the State under the defunct Board of Internal Revenue (BIR), which was the tax collection agency of the government before the creation of Kwara State Internal Revenue Services (KW-IRS) by Dr. Abdulfatah Ahmed in 2012.

“Investigation thus far, have shown that the management of the State’s IGR was cloudy during the then Gov. Bukola Saraki administration between 2003 – 2011, while Dr. Abdulfatah Ahmed who would later succeed his boss as Governor held sway as the Commissioner for Finance.

“He arrived at our office some minutes after 10 in the morning, he was taken in for interrogation after which he wrote his statement, he wasn’t however granted administrative bail until very late last night.

When asked about the bail conditions, he said “The surety must own a landed property in Maitama, Abuja and must be an high ranking civil servant. Also, the sureties are expected to sign his bail bond after submitting the relevant documents at our office.

Further findings by Fresh Insight unveiled that before the advent the new tax collection agency in the State, the defunct Board of Internal Revenue (BIR) which was solely in-charge enlisted the services of so many firms via a consultancy arrangement, prominent among which, is a company alleged to belong to Dr. Bukola Saraki’s longstanding aide, Tunde Morakinyo.

It is however not clear at this time if other active players in the government under investigation will also be invited for questioning.

It would be recalled Dr. Bukola Saraki had until recently been having protracted running battle with various anti-graft and anti-corruption agencies owing to his stewardship as Governor of the State between 2003 and 2011.

Meanwhile, as at the time of filing this report, the embattled Governor is yet to be left off hook, owing to his inability to perfect the bail conditions, Fresh Insight investigation has revealed.

Multiple sources who spoke to Fresh Insight, confirmed that as at this night (9:15pm) he’s not been able to meet the bail conditions which demands a a civil servant surety in the Directorship cadre at the Federal civil service, with landed properties in Abuja.

Speaking further the source said “It is an attempt to finally get at Dr. Bukola Saraki and it is unconnected with the local politics in Kwara.

“Although it’ll be early to say if there is substance in new case or thereabout, but it is suspicious it’s coming at this time when alignments for the 2023 elections is gradually gathering momentum.

” When you rationalise that the subject matter under investigation is a 2003 – 2011 issue, you’ll realise there might be something than meet the eyes.

“It’s safe to say, it is an attempt to finally nail the former Senate President, although Gov. Abdulfatah seem uncooperative and that might account for his continuous detention” the highly placed source stressed.