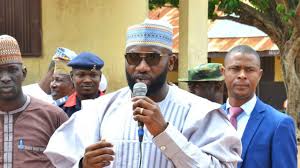 The Chairman board of trustees of SOBI 101.9FM, Mal. Lukman Olayiwola Mustapha has described Mal. Sheriff Shagaya as a shining light and a philanthropist per excellence.

Mustapha popularly called Rebirth Captain made this known through a press release signed by his media team and made available to newsmen in Ilorin, praying that God grants him longevity to continue his philanthropic service to humanity.

“I join numerous well wishers to celebrate my brother, Mal. Sheriff Shagaya, the Chairman, Salman Shagaya Foundation as he clocks 40.

“Sheriff Shagaya is a young man with uncommon passion and love for humanity, I marvel at how he’s been able to impact humanity so much yet he’s just 40 years old.

“Shagaya has shown through his consistency that he’s a lover of the Kwara masses, through his quarterly conditional cash transfer, solar light project, scholarship among others” it reads.

He however enjoined other well to do Kwarans to imbibe the Shagaya apolitical philanthropic spirit.