0Share
By: Ibrahim Sheriff (Gold)
While ruminating over various comments and arguments in various quarters on legislative idealism, which basically concerns law making, checks on the Executives and representative functions, I found it interesting matching the Kwara reality with the much talked about ‘ideal legislation’.
The thought struck my mind sharply on Ilesha Baruba – Bode path (I don’t want to call that road) and later, from Gwanara to Bwen in Baruten local government on a constituency tour with the Hon. Speaker; Bode is under Ilesha district, while Bwen falls under Gwanara district of Ilesha/Gwanara constituency which Rt. Hon. Danladi – Salihu represents.
In all of my political journey across Baruten, it was my first time of going to Bode and Bwen, and the paths are literally terrible and horrifying that you begin to imagine if any government was ever privy of their existence. It was over an hour of torture enrouting Ilesha – Baruba to Bode and later Gwanara – Bwen, it takes only a representative that cares to take it as a responsibility to reach, hear from and show concerns for his people resident in such remote parts of the State regardless of the odds. It was gathered that Danladi’s appearance in these terrains at intervals is a total breakaway from the norms of their political representation, more so that he occupies the number three position. 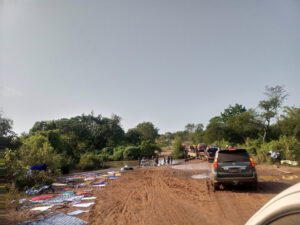 GOV. ABDULRAHMAN OPENS UP ON KWASIEC, OTHER BOARD’S DISSOLUTION