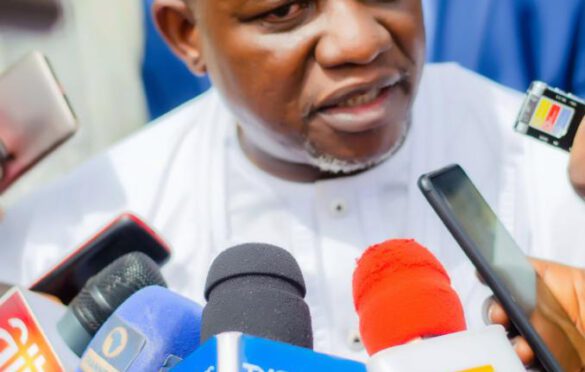 A Kwara state gubernatorial hopeful in the forthcoming 2023 general elections, Mallam Tajudeen AbdulKadir Audu Makama (TAAM), Makama of Lafiagi has assured Kwarans that the actual All Progressives Congress, APC loyalists are coming back stronger to reclaim their stolen mandates.

Speaking to mammoth crowd at a Prayer session organized by the Kwara state chapter of All Progressives Congress (APC), for President Buhari and the salvation of the APC, held at Lower Niger River Basin Open field in Ilorin, Audu said, Kwara is blessed with both human and natural resources, adding that it deserved to be self-sustaining and better than it is.

He reiterated that all Kwarans should not be intimidated by the present figments by the present government, rather they should continued to be resolute and law abiding in the course of demanding a better and pro-people leadership of our dear State.

He added that “the teaming youths and women are well appreciated and respected but should make sure they get their Permanent Voters Card (PVC) collected timely under the on-going continuous voters registration as that is the only power for them to uproot any bad government/leadership and malrepresentation.”

The Chartered Accountant turned politician urged Kwarans to only follow politician with sense of fairness and justice, as those who betrayed the trust repose in them by the people will soon bear the consequence of betrayal.

“We are hopeful and firm in our believe, that come 2023 election, Kwarans will play right politics and install a government for all and by all, as against a sole leadership that has unfortunately left Kwara being run as a private business presently”, he said.

Makama enthused that “Never in Kwara state shall we have a government that administratively paralysed the Local government system, which is the first and closest tier of government to the people since 2019 and later installed transition implementation committees (TIC) for almost a year now.”

“Our message is that we never bargained for a government reputed for administrative rascality, lack of respect for rule of law, corruption and lack of administrative ingenuity that plunged us into billions of Naira in debt and we owe the people the duty to effect the change.”