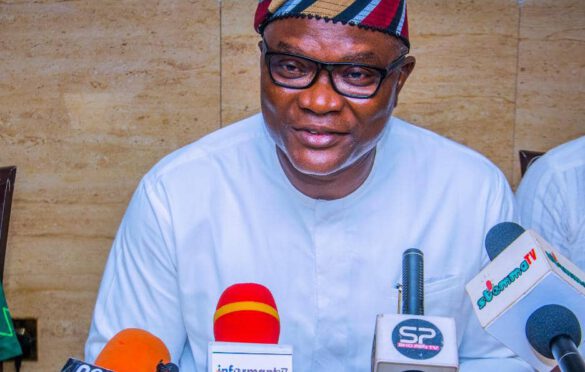 The Kwara South Senatorial candidate of the Social Democratic Party (SDP), Professor Wale Suleiman has disclosed reasons why he dumped the ruling All Progressives Congress (APC) to hatch his aspiration to represent his senatorial district at the National Assembly.

During a media parley with the Association of Kwara Online Media Practitioners (ASKOMP),  Suleiman said “Because of some previous relationships, there is no opportunity for me to have shown interest in representing my people in the All Progressives Congress (APC), so I had to find an opportunity to ensure our people feel represented.

He added that “OTOGE is just the beginning of political transformation in Kwara state, not the end and we still have a long way to go, because I think there are some tendencies we have not gotten rid of. Tendencies where some people will sit down and dictate what public officials should do. These are tendencies I can’t say openly but that we should fight.

Sulaiman, who said his resolve to contest the Kwara South Senatorial seat was hinged on the poor representation the senatorial district has had and the need to acquire authority, so he can fulfill greater responsibilities to his people, expressed optimism that he is up for victory come 2023, noting that his competitors for the senatorial seat of Kwara South had been tested and people have actually seen they have not done better.

The erudite academia who served as idea bank on a pro bono basis for successive governments of Kwara state and executor for series of health management projects in Kwara state, Nigeria and overseas was the brain behind the resuscitation of the Kwara oxygen plant that has been moribund for over a decade and led the team that successfully managed the COVID-19 insurgency, whic placed Kwara among top 3 states in the management of the pandemic across the country, in his capacity as Special Adviser on health to incumbent Gov. AbdulRahman AbdulRazaq before his resignation from the cabinet.

He also established a self funded foundation that has carried out free surgical operations and medical outreach for Kwara South indigents.

Speaking on his agenda for the people of Kwara South, Suleiman noted that “Kwara South have not benefited from dividend of representative democracy and I feel it is a result of the way we select our leaders or the ways our leader are being chosen for us.

“Today, Nigeria is bedeviled with the problem of insecurity, for which some local governments in Kwara South are not speared. As a person that grew through objective process of saving lives, which is one of the primary goal of every government, I will ensure wealth generation, create opportunities through jobs or creating enabling environment to enable ease of doing business, so that people can make their own money. That is the only way out of insecurity. This can be achieved using legislative instruments to strengthen our institutions”, he said.

The Professor who noted that Nigeria is failing in lot of ways at the National, state and local government levels reiterated that the issue of insecurity is linked to lack of opportunities, good infrastructure, social support and poverty. He emphasized that a society is rated in terms of how much it catered for the disadvantaged segments.

Suleiman said as a researcher who have been around politically for a while, he is well acquainted with the needs of the people and he is much prepared to make a people-focused legislature, whose actions would be guided by the needs of his people.

Speaking on agitation for Senatorial seat of Kwara South to Igbomina, Suleiman said “if elected, he will not represent special interest. I will represent my people and my people would have access to me, I will be available for them and give timely constituency reports.

While decrying the overestimation of politicians and government by people, Suleiman noted that power resides with the people who should use it to elect who they want and dictate what they want him to do with that office. He urged Kwarans, especially young people to register to vote, come out to vote and protect their votes if they want a departure from the precarious situation the country is currently in.