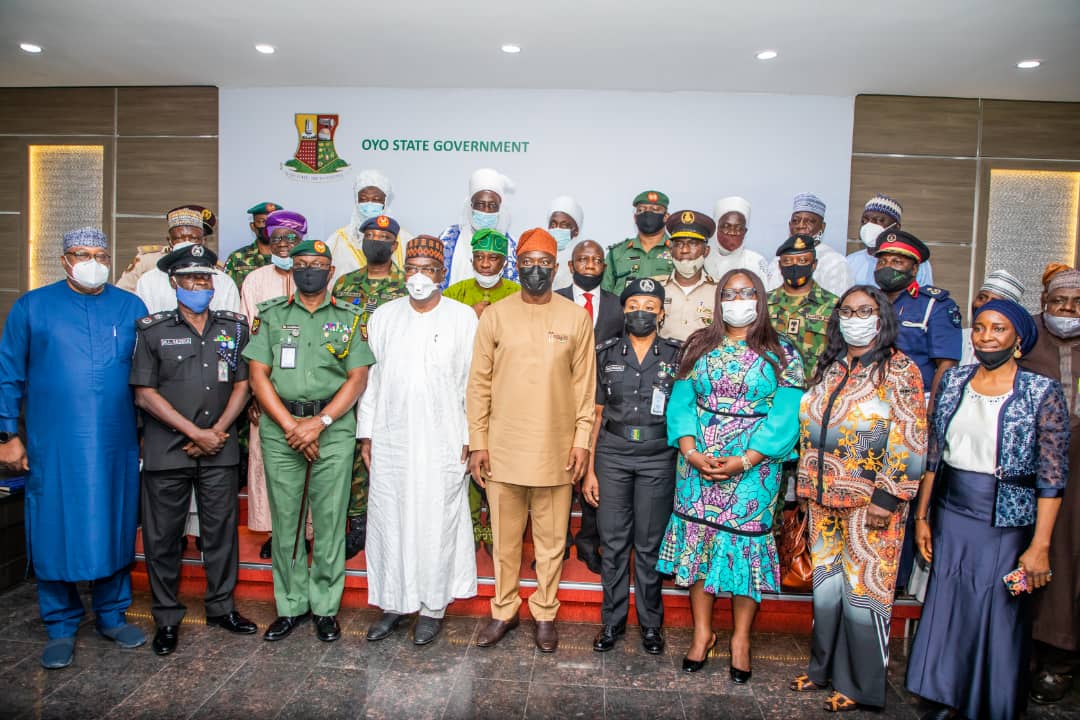 The Governments of Kwara and Oyo states has announced their resolve to set up an interstate working team, to dispassionately address security challenges and come up with solutions to be worked on by both state Governors.
Kwara State Governor AbdulRahman AbdulRazaq on Tuesday led a delegation of state officials, traditional rulers and security commanders to Ibadan for a joint security meeting with his Oyo State counterpart Seyi Makinde and top officials of the southwestern state, a statement by CPS to Kwara state Governor Rafiu Ajakaiye said.
The meeting focused on the recent security breaches involving herders and local communities in Oyo State, the influx of displaced herders into Kwara State and the attendant socioeconomic and security issues, a need for political leaders to act fast to drown the voices of non-actors who spread hate messages, and a need for the two states and traditional rulers across border communities to share intelligence while security agencies do joint patrols to curb criminal activities.
The initiative, which is part of the efforts of the administration to douse tension over the recent influx of herders into the state, is meant to further protect lives and properties.
Kwara and Oyo States share boundaries across many communities.
The meeting, which took inputs from the traditional rulers and security commanders, also discussed the prospects of the National Livestock Transformation Programme of the federal government ending the decades of open cattle grazing and the perennial herders-farmers’ clashes and a need for leaders to stand firm and speak with one voice for peace and national unity.
The leaders observed that states bordering one another ought to collaborate and devise ways to tackle security challenges and foster economic cooperations without relying entirely on the federal government.
Reading the resolution at end of the closed doors meeting, the host governor Engr Seyi Makinde:
“We held a joint security council meeting and we acknowledged the efforts of our security agencies and thanked them for the work they are doing for the country. We do appreciate them and we encourage them to do more.
“We acknowledged the fact that non-state actors are getting upper hands in communicating and spreading hatred within the country and we asked our leaders to speak with one voice, especially at the Nigerian Governors’ Forum. We have to be firm. We have to be decisive in dealing with security challenges the country is faced with.
“We have also noticed the fact that our intelligence gathering efforts have to be deepened. Some of the situations that we faced recently showed that we were only able to react instead of being able to act before those issues erupted and this is due to intelligence failure. The meeting noted that we should deepen our intelligence gathering efforts.
“Our traditional rulers in border towns of Oyo and Kwara states are encouraged to come together in fostering unity and exchange of information. With that, our security agencies will be able to proactively deal with the situation instead of being reactive.
“We agreed that a more detailed working team is to be set up between Oyo and Kwara States. Issues to be addressed will have wider national ramifications.
“Asking some people to leave Oyo State has created issues in Kwara State with internally displaced persons now spread across Kwara State. They are in 13 villages across seven local government areas of Kwara State with its attendant challenges of maintaining those individuals.
“So, a working group is to be set up to dispassionately address those challenges and come up with solutions and the governor of Kwara State and myself will be able to resolve those issues.”
The Kwara team comprised House of Assembly member Ahmed Saidu Baba; Secretary to the State Government Professor Mamman Saba Jubril; former Special Adviser on Special Duties Yinka Aluko; and Senior Special Assistant to the Governor on Security Muyideen Aliyu.
Others are the state’s Commissioner of Police; Brigade Commander, Nigeria Army, Sobi; Director, Department of State Service; Commandant, Nigeria Security and Civil Defence Corps; the Director National Drugs Law Enforcement Agency; and the Comptroller, Nigeria Immigration Service in Kwara State.
The Emirs of border communities Okuta, Ilesha Baruba,  Yashikra and representative of the Emir of Gwanara were also in attendance.