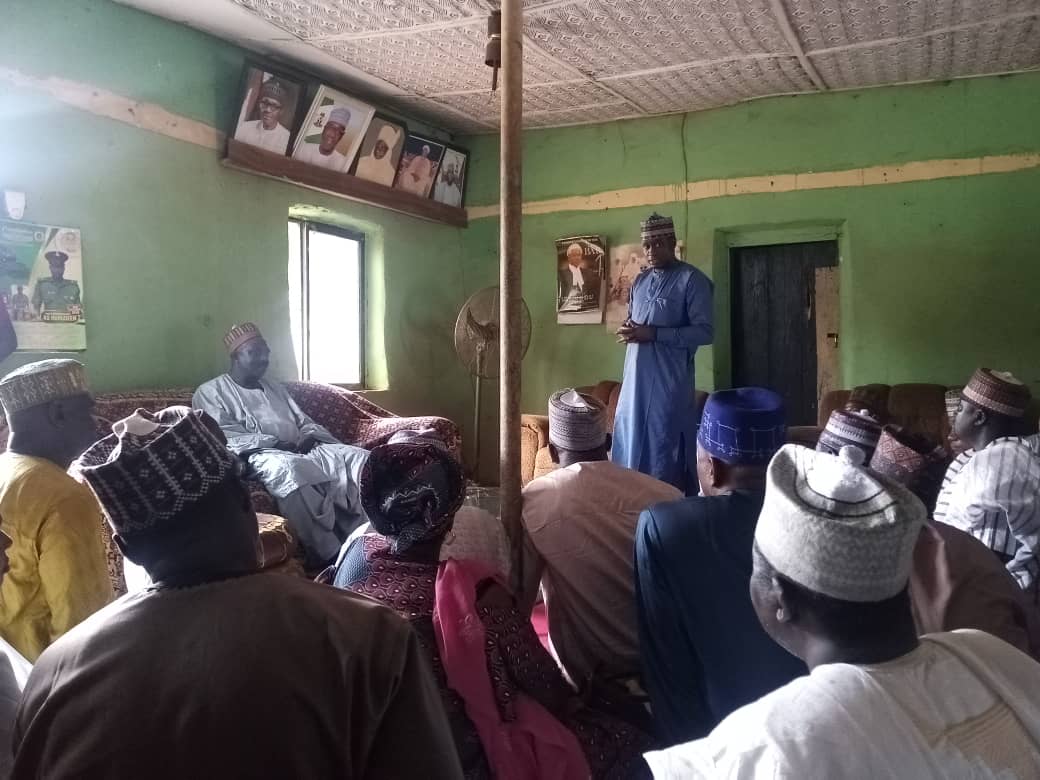 Speaker, Kwara state House of Assembly, Rt. Hon. Yakubu Danladi Salihu, Kwara North Senator – Pharm. Sadiq Umar, member representing Baruten/Kaiama Federal constituency – Hon. Umar Mohammed Bio and other elected and appointed political office holders from Kwara North have embarked on constituents engagement tour across five (5) local government of the District.
The harmonized constituents feedback tour, according to a statement issued by the Special Assistant, Media to the Speaker, Ibrahim Sheriff was designed to relay what the government has done and ongoing projects and activities to the people, and to also receive feedback from the people to enable government at all levels set its priorities right.
In his separate remarks at Baruten and Kaiama local government headquarters in Kosubosu and Kaiama respectively, Danladi-Salihu said “Kwara North is hugely underdeveloped, strategic planning is required for the current administration to succeed in its commitment to address the District’s wide infrastructural deficit and that is why we have collectively decided to engage our people on the journey so far, and extract their feedbacks on how we can better serve our supreme master (the people).
“Both at the federal and state levels, the 2021 appropriation process is underway, notwithstanding the Senatorial town hall meetings, we want to get down to the grassroots to enable us set our developmental priorities rightly.”
The legislator, who said this government have been able to reduce water problem in Baruten and several parts of Kwara North to a large extent listed the Kwara state University – KWASU, Ilesha campus, Ilesha Baruba – Budo Kpanu road, Ilesha-Bode-Babanne-Gwasoro road, Okuta township road among several other projects would receive attention in the 2021 appropriation, while revealing the State government’s efforts to ensure stable network in Baruten & Kaiama communities and the procurement of ambulances for two cottage hospitals in Baruten and approval of comprehensive rehabilitation of general hospital Okuta, and Basic Health Centres in Gwanara and Kosubosu, Baruten local government.
He added that “Solar streetlight electrification project has been approved and would be executed in the local government ward headquarters soon.”

Danladi noted that “the present government aims to continue on the path of changing developmental narratives of Kwara North regardless of personal interests, we challenge all leaders of Kwara North to develop and present developmental template to the government and not political positions ahead of next elections, because we need to justify why we were elected in 2019 before we can talk about 2023. It is however normal for detractors to make distractive attempt and also normal for a serious government to be focused.”
While paying homage at the palace of Emirs of Ilesha – Baruba, Okuta and Kaima, Danladi-Salihu appreciated progressive roles in ensuring this government succeed and urge them to continue praying for and advise the government whenever they feel the need arises.
Senator Sadiq Umar representing Kwara North, in his remarks said “the gathering represents the vision of Kwara North, which is that of a people challenged by underdevelopment, committed to work together and attract development for our dear people, Kwara North must seize the opportunity of Governor Abdulrazaq’s openness and responsive leadership to address Kwara North’s huge infrastructural deficit.
Rep. Omar Mohammed Bio, Hon. Halidu Danbaba, Hon. Ahmed Saidu Baba, the commissioner for Works and his local government, chieftaincy affairs and community development counterpart thereafter took turns to give detailed account of their stewardship, while charging the people to not hesitate in sharing developmental ideas with their representatives at all levels.
Emir of Ilesha, His Royal Highness, Prof. Haliru Abubakar in his reaction, said the challenges of development in Kwara North is glaring and magnifying everyday, and this government would be remembered for what it is able to do, thus appreciating the initiative of interacting with the people to understand their developmental preference.
“All of you are very serious, I am convinced this government is sincere and appreciates the passionate commitment of the Hon. Speaker – Danladi Salihu to development of Baruten and Kwara North. Kwara North must be united and that is what we need. We need to take our destiny into our hands. We cannot have a government without distraction, but your sincerity will make you overcome them”, the Emir added.
The Emir of Okuta, His Royal Highness, Alh. Idris Abubakar Shero in his own remark applaud the constituents engagement initiative, while assuring the government of the Emirate’s 100% support to ensure it succeeds.
The Emir of Kaiama, His Royal Highness, Alh. Umar Muazu applaud the initiative, noting that this is the first time political leaders would come to interface with the people after election. He prayed Allah continue to empower them to fulfill all electoral promises.
The Baruten local government All Progressives Congress party Chairman, Abubakar Setraco appreciated the novelty of the harmonized constituents engagement initiative, while emphasizing the significance of leadership – followership interaction in modern democracy.
The Chairman organizing committee, Hon. Lafia Aliyu Kora Sabi had earlier briefed the essence of the gathering was to foster unity for developmental purpose under the leadership of Governor AbdulRazaq, while advising politicians of Kwara North extinction against politics of underdevelopment and advocate only for what is good in the interest of all.
The Durbin Kaiama – Alh. Abdulrahman Wali in his submission advocated for improved funding of local security and thank the State government for the developmental projects in Kaiama, while assuring the community’s continued support.
Kaiama and Baruten youths representatives – Musa Abunakar Tasuki and Abubakar Abdulrahman in their separate remarks appreciates the government for the projects in Kaiama and Baruten local governments while asking for more. They demanded equal distribution of projects, appointments and employment among the three geopolitical zones the State.
Also present at the events are all Kwara state House of Assembly members, Federal and State statutory boards and commissions Chairmen/members, representatives of traditional institutions, party leaders, stalwarts, executives, youths and women.