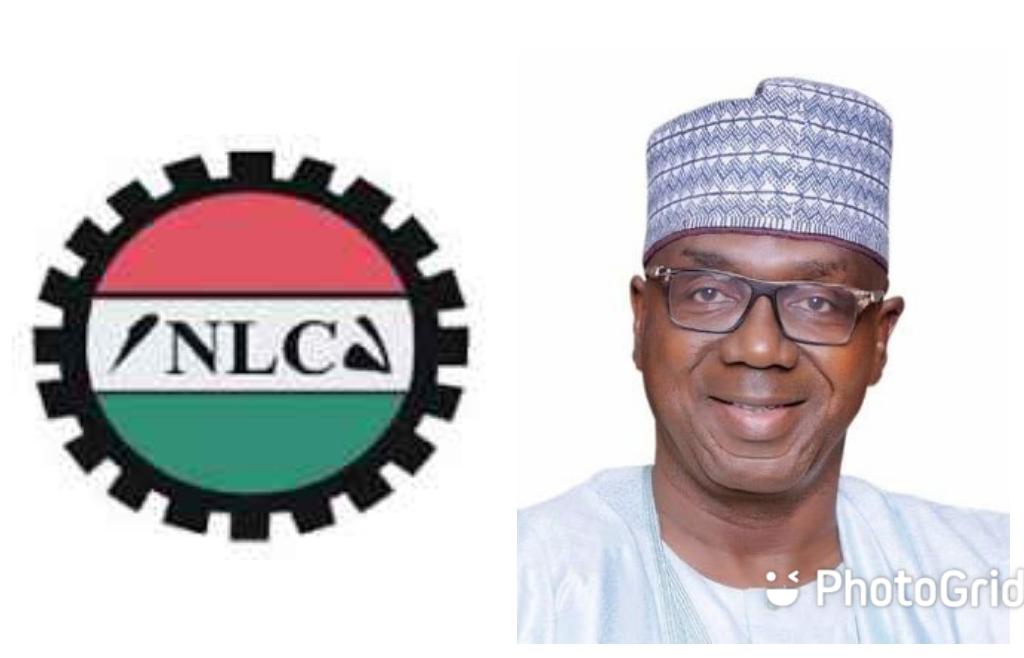 The Nigeria Labour Congress has accused the AbdulRahman AbdulRazaq led Kwara state government of insincerity and not acting in good faith over the #30,000 Minimum wage issue.

The Labour Movement also posits that the government has not presented itself to be labour – friendly.

This is contained in a reaction by the NLC, in response to claims attributed to Gov. AbdulRazaq during the visit of Emir of Ilorin to the Government House to mark the end of 2021 Ramadan fasting in the State, that the Labour movements in the state were being sponsored by the opposition party.

In a letter dated 16th May, 2021, addressed to the Governor and signed by the State Chairman, Aliyu Issa Ore, exclusively obtained by Fresh Insight, the Union said such insinuation did not come to it as a surprise, because it had repeatedly heard the rumour. 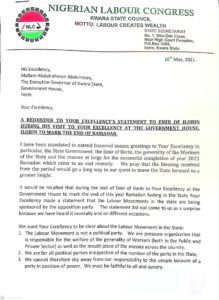 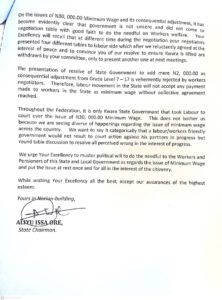 The letter reads in part:
“It would be recalled that during the visit of Emir of Ilorin to Your Excellency at the Government House to mark the end of this year’s Ramadan fasting in the State, your excellency made a statement that the labour movements in the state are being sponsored by opposition party.

The statement did not come to us as a surprise because we have heard it severely and on different occasions.

“We want your excellency to be come clear about the labour movement in the State:
1. The labour movement is not a political party. We are a pressure organization that is responsible for the welfare of the generality of Workers (both in the Public and Private Sector) as well as the mouthpiece of the masses across the country.
2. We are for all political parties, irrespective of the number of the party in the State.
3. We cannot therefore shy away from our responsibility to the people because of a party in position of power. We must be faithful to all and sundry.”

The letter added, “On the issue of N30,000 Minimum Wage and its consequential adjustment, it has become evidently clear that government is not sincere and did not come to negotiation table with good faith to do the needful on Workers’ Welfare.

Your Excellency will recall that that at different time during the negotiation, your negotiators presented four different tables to labour side which after we reluctantly agreed at the interest of peace and to convince you of our resolve to ensure Kwara is lifted are withdrawn by the committee, only to present another one at our next meetings.

“The presentation of resolve of State Government to add mere #2,000.00 as consequential adjustment from Grade Level 7 – 17 is vehemently rejected by workers negotiators. Therefore, Labour Movement in the State will not accept any payment made to workers in the State as minimum wage without collective agreement reached.”

“Throughout the Federation, it is only Kwara State Government that took Labour to court over the issue of N30, 000 Minimum Wage. This does not bother us because we are seeing diverse of happenings regarding the issue of minimum wage across the country. We want to say it categorically that a labour/workers friendly government would not result to court action against his partners in progress but round table discussion to resolve all perceived wrong in the interest of progress.”

NLC charged Gov. AbdulRazaq ro muster political will to do the needful to the Workers and Pensioners of this State and Local Government as regards the issue of Minimum Wage and put the issue at rest at once and for all in the interest of the citizenry.