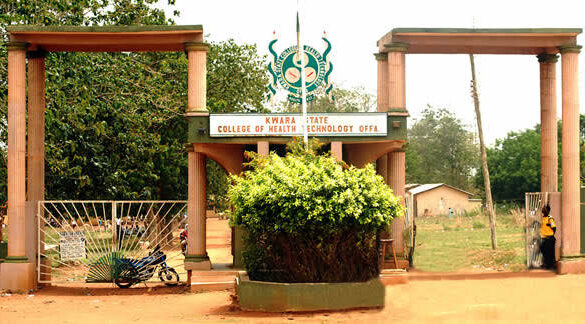 The Governing Board of the Kwara State Government owned College of Health Technology, Offa has approved the report of the investigative committee it set up to investigate the allegations of certificate forgery leveled against Mr. Nasiru Abdulrahman, HOD, Medical Laboratory Department, Fresh Insight can exclusively report.

The decision adopted at the Governing Board’s meeting which held on Tuesday 22nd, March 2022 at the Institution’s premises.

The meeting which had in attendance Barr. Olaitan Opoola, Ameen Risikat Mojirola, Mrs. Sarat B. Jimoh and Oganija Kazeem Yunus, all board members also had S. A Jimoh (Registrar), Dr. Isiaku Nda (Deputy Provost Admin), Babatunde Salim, Ayinla Lukman among others in attendance.

Speaking with Fresh Insight, an highly placed source in the know said “After vigorous dissection of the committee’s report, the Governing Board approved the suspension of Mr Nasiru Abdulrahman for 3 months, which is expected to serve as a deterrent” he added.

It would be recalled a Kwara based online platform (not Fresh Insight) had exclusively reported, the indictment of the said HOD by an

Investigative panel, which was then awaiting ratification of the Governing Board.

The online report reads “According  to documents cited by this medium, Abdulrahman according to a query issued him by the Registry on the 24th January, 2022 with reference number alleges him of falsifying academic records.

“The letter exclusively obtained by this medium reads “Explain with 24 hours why disciplinary action would not be taken against you for willfully falsifying academic record in respect of Olawale Itunu Julianah CHT/MLT/17/0804.

“You had issued an unauthorized academic transcript which was not in the know of either the exam unit or the Registry and consequently manufacturing scores in place of failed four (4) 100 level courses and 300 level GNS course of the said candidate”.

“The accused in his response obtained by this medium while denying wrong doing said “Your letter of query dated 24th January 2022 was received by me around 2:30pm in respect of the alleged falsification transcript in respect of Olawale Itunu Julianah and I have immediately caused the scheduled officer in charge who is currently on internship programme the permission and report on the full explanation of the mentioned allegation.

“It is pertinent to note that from the information gathered from the scheduled officer that the transcript was issued prior to the college policy on transcript.

“More so, the carryover in question had been done as makeup exams directed (as at then) by the college management according to the scheduled officer.

“I hereby wish to submit that the allegations of falsification of result is not true, as I can never and will never try such crime” he concluded

However, according to the governing board resolution via a report titled REPORT OF THE INVESTIGATIVE COMMITTEE SET UP ON THURSDAY 27TH OF JANUARY, 2022 BY THE GOVERNING COUNCIL OF KWARA STATE COLLEGE OF HEALTH TECHNOLOGY, OFFA TO INVESTIGATE ALLEGATIONS OF INAPPROPRIATE CONDUCTS OF THE PROVOST AND SOME OTHER MANAGEMENT STAFF OF THE INSTITUTION which was dated 17th February 2022 and jointly signed by Alh. Uthman Shaaba and Abdulrazaq Abdulmumeen the Chairman and Secretary respectively, also

had the signature of the following members, Barr. Olaitan Opoola, Ameen Risikat Mojirola, Mrs. Sarat B. Jimoh and Oganija Kazeem Yunus, Abdulrahman Nasiru was found culpable of the allegation.

The allegation was not only confirmed to be true according to documents exclusively obtained by Fresh Insight, it was also captured in findings number 7 of the report“That the HOD of Medical Laboratory Department Mr. Abdulrahman Nasiru unilaterally issued an authorized transcript to Miss Olawale Itunu Juliana with matric number CHT/MLT/17/0804 without the approval of the College management and he was subsequently issued a query, which he later responded to.

“While the committee recommended the removal of Mr. Abdulrahman Nasiru, it also recommended that “…any HOD found guilty of issuing transcript at Departmental level without following the laid down guidelines should be made to face the appropriate sanctions.

However, checks by this medium confirmed that not only is Mr. Nasiru Abdulrahman still the Head of the Department, as at yesterday afternoon (Tuesday), the institution hasn’t made any effort on record to arrest the rampant falsification of transcript in the institution” it quoted.