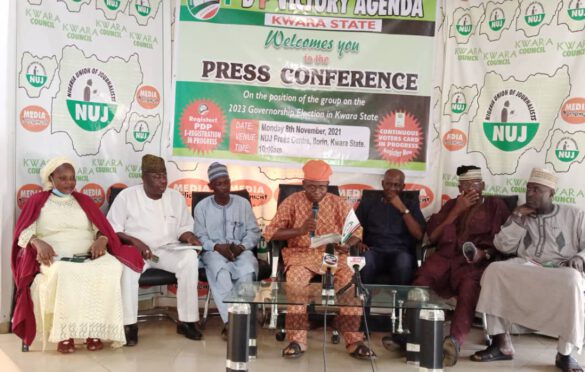 A group within the leading opposition, Peoples Democratic Party (PDP), PDP victory Agenda has enjoined the leadership of the party and stakeholders to settle for a candidate of Ilorin origin.

The group made this call at a press conference held at the NUJ Secretariat, Ilorin, Kwara State today, stressing that the only winning strategy the party must adopt is settling for political expediency.

The group’s Chairman, Dr. Babatunde Salami while reading the prepared speech said “The group emerges to sensitize the party on how to get it right on candidates selection, especially the governorship candidate in the coming elections.

“It is no doubt, that Kwarans have tasted both sides of the political life, and now discovered the difference.

“…factors that may lead the PDP to victory come 2023 general elections in Kwara State, as we approach the electioneering year.

“It is not issue of political marginalization but a political winning strategy by political parties. When equity, justice and fairness do not have the required voting strength to win at a particular time, the concern sings the song of marginalization, not minding the party’s calculation of winning the election.

“Zoning and political emotional appeal can only work when there is a smooth transition of power in a conducive political space is prevailing in the Kwara State PDP.

“It is our recommendation to the party to fly an acceptable, competent and reliable candidate in the Kwara Central to serve for four years to stabilize the State, then Kwara North should be considered for equity and justice in 2027, when PDP must have returned to power in Kwara State” he stressed.