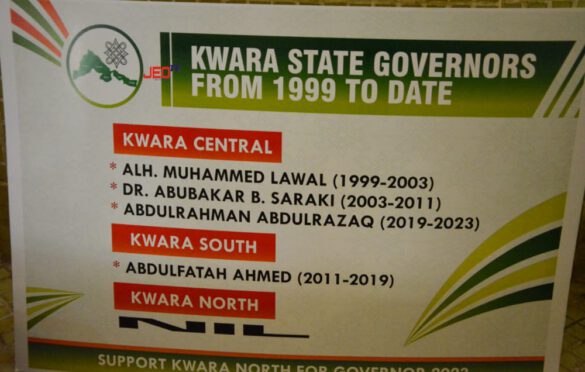 This much was disclosed by the group at it’s world press conference held in Ilorin on Thursday, stressing that although the ambition is to produce a Governor of Kwara North extraction come 2023, it however has the endorsement and buy-in of relevant stakeholders from across the 3 Senatorial Districts.

Speaking at the Press conference, the group’s Chairman Comr. Abdullahi Aliyu Lade said “After our support for 24 solid years by 2023, justice, equity and fair play demand that Kwara North should take the pilot’s seat in order to make Kwara State another Dubai in Nigeria, especially as our State more than ever before needs a new beginning and a new choice.

“Kwara North seeks to produce the next Governor based on competence, awareness of the next phase of development of the State, and very mindful of equity, justice and fairness.