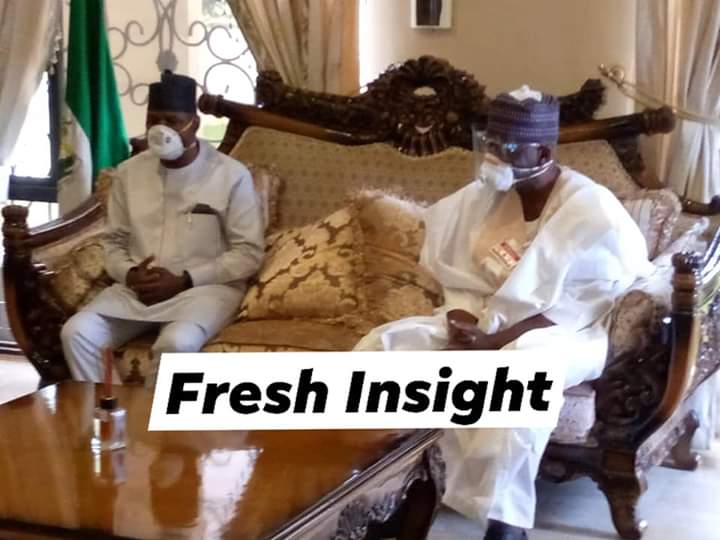 By Salman Muhammed
The Kwara APC stakeholders meeting held at Kwara Hotels Ilorin earlier today, which was a follow-up to the ongoing reconciliatory moves in the party ended on a stormy note with chairs flying in different directions
According to Fresh Insight findings the meeting which started around 3:30pm commenced on a friendly note and was going on smoothly with watchers heaving a sigh of relief that the elusive peace has finally found an abode in the party.
Narrating the whole incident to Fresh Insight, Hajia Temitope Ayoka Lawal, a chieftain of the party from Ilorin East local government said “The Governor and State leader of the party, Alh. Abdulrahman Abdulrazaq walked into the venue of the meeting few minutes after 4, with the Deputy Governor Kayode Alabi, Speaker House of Assembly Rt. Hon. Salihu Danladi Yakubu and all Assembly members, the party executives led by Alh. Bashir Omolaja Bolarinwa and other stakeholders drawn from across the State already seated.
” The Governor while delivering his speech highlighted his achievements thus far as the executive Governor of the State, while also using the opportunity to highlight some of the challenges his government was facing prominent among which is the acrimonious and highly contentious minimum wage issue.
“The Speaker on his part, discussed largely about the importance of harmonious working relationship in the party, pleading that in the spirit of oneness, all aggrieved and warring groups within the party should forgive one another and forge a common front moving forward, a plea which was received with a resounding applause.
” It was now the turn of the party elders to contribute and Rev. Abel Adewunmi from Irepodun local government area of Kwara State was recognised to speak and duly handed the phone.
“Unknown to majority of the attendees however, Adewunmi had another plan as he stood up with an already prepared speech reeling out allegations and accusing the Chairman of mismanagement of campaign funds.
” On hearing the divisive and dead issues Adewunmi was exhuming, the microphone was taken away from him by a party executive and he was pushed out if the hall, this didn’t go down well Adewunmi and his group who are majorly members of the numerous AA group.
“It led to a free for all, with chairs flying in opposite directions, in the ensuing melee, security operatives attached to the Governor whisked him away from the scene with the shout of Ramani Ole, Ramani Ole renting the air, as the Governor squeezed his way out of the venue.
Speaking with this medium on condition of anonymity, an high ranking Office holder, described the incident as unfortunate, he however traced the genesis of the latest crisis to the stakeholders consultative meeting of the Minister of Communication and Tourism, scheduled for tomorrow (Friday).
He said ” The Governor haven’t been happy ever since he heard of the proposed stakeholders consultative meeting, even though he was invited as the Guest of Honour.
“The botched stakeholders meeting earlier today which was at the instances of the Governor’s camp was aimed at taking shine tomorrow’s event, even though the programme wasn’t designed to struggle power with him.
” It is disappointing that the Supreme Court just nailed the coffin of the APC in ilorin South by finally taking away the House of Assembly seat duly won by our party on technical grounds which was largely due to disharmony existing amongst us, yet we’re more concerned about removing a Chairman that led us to a resounding victory” he stressed
Meanwhile, the State Chairman of APC Hon. Bashir Omolaja Bolarinwa has denied his purported suspension, describing same as the effect of day dreamers, who lack knowledge of workings of the party.
This much was contained in a release signed by his media aide Ayo Abegunde, a copy of which was made available to Fresh Insight in Ilorin today.
It reads “There was no gathering of proper persons who have the power and rights to undertake such a venture, so any allusion to his removal can be nothing but a figment of the imagination of these finger happy news mongers.
“Hon. Bashir Omolaja Bolarinwa remains the authentic and undisputable chairman of the APC in kwara state and will remain so untill his constitutional tenure ends” he added