There are growing bickering within the two factions of the Kwara State All Progressives Congress (APC), Irepodun LG over alleged attempt by the Kwara State Government through the Ministry of Justice, Fresh Insight has gathered.

According to party sources, the crisis which a by-product of the party crisis that has engulfed the ruling APC in the State, leading to several litigations.

It would be recalled that in similar manner, Gov. AbdulRazaq through Kwara state Ministry of Justice hijacked the trial of suspects who allegedly attacked APC stalwarts loyal to Bolarinwa’s camp, during a stakeholders meeting in Lafiagi, Edu local government of Kwara state on February the 8th, 2021 The AbdulRazaq led Kwara State government requested and for the case transferred to Ilorin, the state Capital. https://freshinsightnewstv.com/exclusive-kwara-gov-moves-to-hijack-prosecution-of-suspected-attackers-of-yahman-audu-others-in-edu/

Speaking with Fresh Insight on the development, a member of the party loyal to the Bashir Omolaja Bolarinwa faction, Kayode Akande said “Knowing that the infighting within the ruling APC had led to both factions having their own separate party structures and secretariats across the 16 local governments, the factional group loyal to the Governor had been trying to illegally take over our party LG secretariat in Omu-Aran, not minding the fact that we’re the ones paying for the rent.

“In order to avoid a free for all, we temporarily locked up the secretariat only for the Governor’s group led by the LG Transition Implementation Committee Chairman, Jide Oyinloye on 20th June 2021, and 9th September 2021 respectively, to allegedly lead some suspected thugs to forcefully break into the Irepodun APC Party Secretariat located at Latinwo Market Area, Omu-Aran” he added.

During the two attempts, the defendants were said to have destroyed the padlock and other facilities.

Infuriated by the affront, the party chairman in the LG, Hon. Yemi Aransiola filed a litigation of unlawful trespasses and vandalism at the Upper Area Court in Omu-Aran with Suit Number: UACO/CRF19/21, joined as parties to the case were Mr. Jide Oyinloye & Saibu Olanrewaju (Defendants).

Alleging the State government through the Ministry of Justice of working behind the cover to circumvent dispensation of justice, a party member who craved anonymity said “We’re not unaware of several plots by the Governor and his group to use the state apparatus to deny us justice.

“As law-abiding citizens, we decided to fight our course within the ambit of the law. We presented our case before the Honorable Judge at the Upper Area Court in Omu-Aran in a bid to put a stop to such occurrence in the future. But to our dismay, the Kwara State Government has set in motion its apparatus to tamper with the judicial process at all cost.

“It should be known to the public that the antics of the Kwara State Government are very much in play. They had earlier pushed our father figure and well-respected Traditional ruler in the local government to push for an out-of-court settlement, but when we voted among ourselves, the majority voted against the out-of-court settlement.

“We, therefore, urge the Honorable Judge to not be cowed or arm twisted by these set of power mongers who are hellbent in subverting the interest of the public which the judiciary stands for as we pray the court to jettisoned their request to take over the case and allow Justice take its full course on the case before it.

According to court papers made available to journalists in Ilorin, it revealed that a letter dated 7th October, 2021 addressed to the Honorable Attorney General & Commissioner for Justice, by the counsel to the defendants, Buhari Oguntoye Associates requesting the state attorney general to take over prosecution of the alleged criminal case “in the public interest and the interest of justice”. 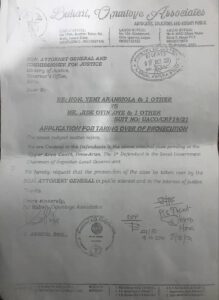 “We’re counsel to the defendants in the above criminal case pending at the Upper Area Court, Omu-Aran. The 1st defendant is the Local Government Council Chairman of Irepodun Local Government.

“We hereby request that the prosecution of the case be taken over by the HON. ATTORNEY GENERAL in the public interest and the interest of justice,” a letter signed by E. AHMED, ESQ., for Buhari Oguntoye Associates, reads.

Similarly, a copy of the letter obtained by this medium, addressed to the Honorable Judge of the Upper Area Court in Omu-Aran, by the Kwara Commissioner of Justice on October 20, 2021, requesting a takeover of the prosecution of the alleged criminal case. 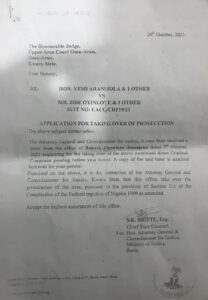 It partly reads: “The Attorney General and Commissioner of Justice, Kwara State received a letter from the office of Buhari, Oguntoye Associates dated 7th October 2021, requesting for the taking over of the above mentioned Direct Criminal Complaint pending before your honour. A copy of the said letter is attached herewith for your perusal.

“Premised on the above, it is the instruction of the Attorney General and Commissioner of Justice, Kwara State, that this office take over the prosecution of the case, pursuant to the provision of Section 211 of the Constitution of the Federal Republic of Nigeria 1999 as amended. Accept the highest assurances of this office, ”a letter addressed to the Honorable Judge signed by the Chief State Counsel S.K. SHITTU, Esq. for Honorable Attorney General and Commissioner of Justice, Ministry of Justice, reads.

However, the court has fixed Wednesday, November 22nd, 2021, for the continuation of hearing.