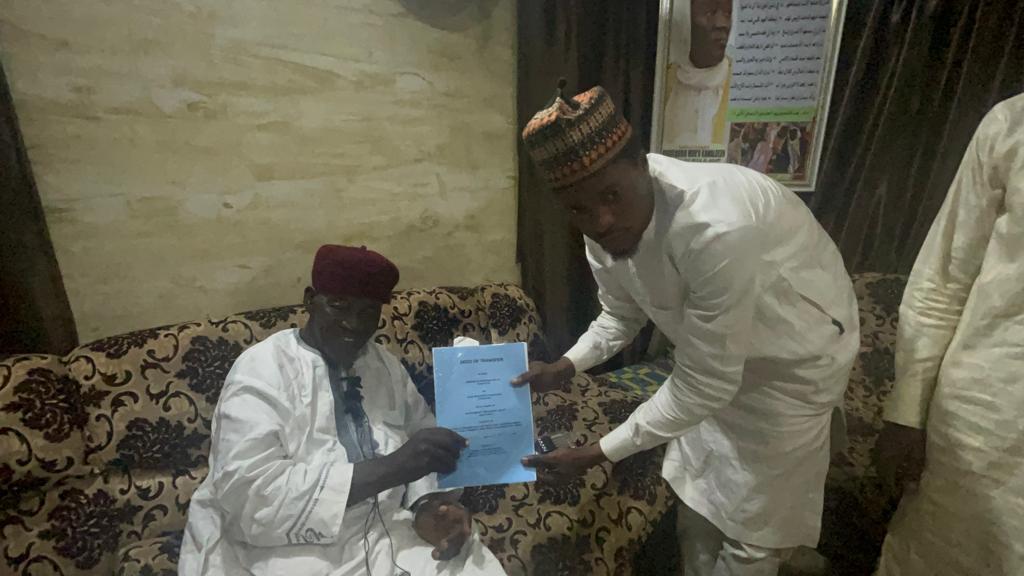 Saliu Mustapha, who is also the Turaki of Ilorin Emirate, had earlier promised the widows houses as a way of honouring their husband who died in the flooding that ravaged some parts of Kwara state in October.

This newspaper learnt that the cleric died without a house, leaving the two wives and 17 children in a rented apartment. He was also reported to have left a paltry 13,500 naira in his bank accounts.

And apparently in order to ameliorate the agony of the families, Mallam Mustapha announced a donation of a brand new twin semi-detached 4-bedroom apartment to the two wives and empowered them with capital to enable them to begin businesses to support the families left behind by the late cleric.

Meanwhile, keys to the new houses were handed over to the Khaliful Adabiya, Sheik Mohammed Kamaldeen. Also delivered alongside the keys to the apartments are documents of ownership which have been duly signed.

Those present at the handing-over ceremony include representatives of the family of the deceased clerics, AbdulHafiz Aboto, who’s also the first son of the deceased; representatibes of the Turaki, Prince Agboola Sulu-Gambari and Mallam Mayaiki; a marriage coach and legal practical, Abdullahi Abdullateef Sudaisy, clerics and surviving children of the late Aboto.

While addressing the people, Sheikh Kamaldeen said the APC candidate had been immensely contributing to the development of the community long before he ventured into politics. He claimed that the gesture to the Aboto family was done without political coloration.

“We didn’t expect this but he promised and he has come to fulfil it. His representatives  and lawyers are here to hand over the keys and documents of the two houses,” the cleric said.

He then prayed to God to continue to bless Mustapha for elevating Islam.

” We cannot thank him enough. He sympathises with us so much, ” the cleric said.

“Mustapha has shown that everything one has belongs to God. The surviving widows have been in a rented apartment and Mustapha was moved to help them. He promised apartments and he also promised empowerment programmes for them.

Speaking on the life and times of Aboto, Sheikh Kamaldeen, said the late cleric is an example to follow.

He added; “What Mustapha did is also exemplary. Thank God Aboto finished the work in a comforting manner that gives us assurance that he will be with God in his paradise. He did not live to amass wealth.”

Sheikh Kamaldeen also stated that other than the Abotos, Mustapha also empowered families of the others involved in the accident.