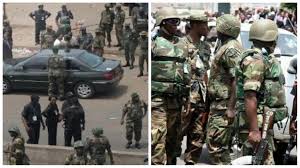 By Abdullateef ‘Lanre Ahmed
Law is made for man and not the other way round. The ugly event of Friday, a fortnight ago, in Ilorin really punctured the ethos with which Kwarans are reputed as well as the relative peace and calmness that has permeated the state over the years.
The disgraceful manner in which barefaced looting was executed on public and private property in the capital city of Ilorin, indeed, called for sober reflection. Not only that. It required every right thinking compatriot to ask this simple question. (Why have we  condescended ourselves and stooped this low?).
That anarchy was gradually descending on the state was no longer a debate. The looting with attendant excitement on the part of looters paved way for extortionists to storm ever-busied streets in the metropolis to make brisk business on the road users with concomitant threat. Those who dared the hoodlums are still licking their wounds.
And the untoward development compelled Governor AbdulRahman AbdulRazaq to impose a 24-hour curfew on the state, the duration of which had since been relaxed and now effective from 8pm to 6am following improved security situation in the state capital.
Perhaps to curb the excesses of trigger-happy security personnel on the enforcement of the curfew, the state government exempted essential workers as those not affected including Journalists, Bankers, Medical Workers and even Attendants at the fuel stations so long they are armed with the identity cards of their respective places of work.
While in a circumstance like the present in Ilorin, it is expected that some people in their characteristic manner and for inexplicable reason, would surely default or flout the lawful order. But the onus lies with the law enforcers to determine who defaults and who does not. That said.
I have been inundated with the reports in the last few days of how gun-wielding and horsewhipping soldiers pounced on defaulters, especially around Gambari axis leading to Sobi Area of Ilorin.
Lo and behold, I was ensnared in the glaring human right violation of the gun-wielding soldiers at exactly 8:13pm tonight on the same spot. My simple explanation as to who I am and why I was outside as of that time was, as some would love to say, (story for the gods).
The trigger-happy soldier ordered me out of my car and made me to sit on the road. Referring to myself as a journalist with an accompanied office identity card was adding salt on a mortal wound. He nearly whipped me, for he had initially raised the (Koboko) in his hand, waiting to land on my head and to the entire body. Sitting on the road for 28 minutes could be excruciating and traumatizing.
Knowing that refusal to comply with the order could land me in trouble, I took it with equanimity and sat on the road while his colleague was using his mobile android phone to take picture of me and others. As disturbing as this could be for me emotionally and psychologically too, some essential workers including medical personnel have suffered similar human rights violation in the hands of overzealous soldiers and other security agents in the ongoing curfew.
Visiting the barbaric act continuously on innocent people, particularly the essential workers exempted in the curfew order of Governor AbdulRazaq could be demoralizing. It is obvious they relish doing that with joy and effervescent to the discomfiture of would be victims.
And it is high time the state Chief Executive call the soldiers and other security personnel, seen to have been violating the rights of essential workers, to order. Kwara has not descended to a Banana Republic and it cannot be treated as such. It is only bent not broken (apologies to Professor Sunday Enessi Ododo).
A stitch in time saves nine, so a saying goes. But this time, it could save one hundred or more.