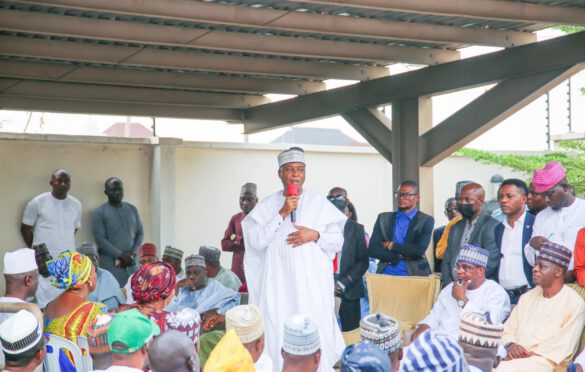 The Peoples Democratic Party (PDP) in Kwara appears to have learnt a lesson from the shoddy management of the pre-2019 internal contestations within the party, something that resulted in the lethargic attitude of the disgruntled majority and eventually led to the poor showing of the party at the polls.

As the race for the 2023 elections hots up, the leader of the party in Kwara, Dr. Abubakar Bukola Saraki is not leaving anything to chances this time. He started early to put his house in order and to ensure that the candidates that emerge to fly the party’s flag at different levels enjoy the backing of majority of party members.

Saraki, no doubt, is not prepared for any internal crisis or bickering that would dim the chances of the PDP at the next poll. He has therefore consistently engaged with party leaders and stakeholders, taking critical decisions along the way in a most unusual manner.

Beginning with the issue of the governorship ticket, Saraki, who must still be conscious of the near free for all scramble for the guber ticket in 2019, announced early enough where the governorship ticket would go. He must have done this in order to spare would be aspirants from needless struggle and save them the burden of undertaking a journey that would ultimately leads to nowhere.

Having settled the issue of the governorship, the leader, as he is fondly called by his followers, again returned to Ilorin few days ago to make critical decisions that would shape the impending 2023 elections.

As someone who was quite instrumental to the passage of the Not Too Young To Run bill as Senate President, Saraki, in his efforts to reposition the Kwara PDP for victory in 2023, is no doubt looking to utilize the energy and mobilization strength of the youth demography. He is also opening the space for inclusion for the young turks within the Saraki dynasty in ways that had never been witnessed.

To show that he recognises the renewed interest and vigour of young people as regards to party activities, especially the never seen interest in elective positions, Saraki himself notes, “In Kwara, we had over 200 people seeking to contest for office under the PDP. 70 percent of them were young professionals. This shows that there is progress.”

But the progress Saraki spoke of is not just in the number of young people coming forward to contest elections within the Kwara PDP. It is also visible from the level of access young people now have to the leader, without the hitherto stifled officialdom that used to be the case. They now have opportunity to engage with him directly, and it is already looking like majority of them would get the nod to run for state house of assembly positions this time.

While the issue of House of Representatives seats appears to be a little more contentious, especially owing to the number of aspirants, Saraki appears to be making progress in that regard as well; carefully managing competing aspirations and making sure that the prevailing cohesiveness within the party is not jeopardized.

Regarding the Kwara South Senatorial ticket, the former senator and Chairman of Senate Committee on Banking, Insurance and other financial institutions, Senator Rafiu Ibrahim was given the right of first refusal and as a result handed the ticket without any contestation.

Coming to Kwara Central, Saraki sprang a surprise when he announced decisively that the ticket for the district would be zoned to Ilorin West, notwithstanding the fact that two candidates from Ilorin East, former House of Representatives member, Hon. Amuda Kannike and Sara Adebayo, were already in the race. Feelers said that Saraki took the decision in recognition of the fact that Ilorin West would likely be the battleground in the election, considering that the incumbent Governor Abdulrahman Abdulrazaq hails from there.

Having therefore microzoned the Kwara senatorial ticket to Ilorin West, it appears the coast is clear for the former Minister of Sports and Youth Development, Mallam Bolaji Abdullahi to emerge unopposed having been the only aspirant so far from the local government area. Many watchers of political events in Kwara believe the choice of Abdullahi would be a great one for PDP, considering his huge popularity among the youths who play key role in deciding electoral victory.

By and large, it appears the Kwara PDP under Saraki is battle ready, and the careful management of the pre-election processes suggest that the party would go into the election with a united front, thus working together in unity to post a good outing in the 2023 polls in Kwara.