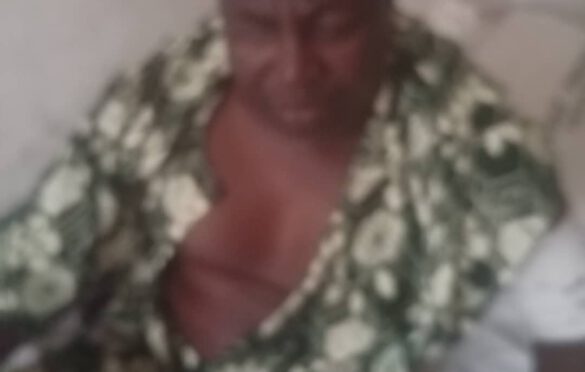 Olu Odebunmi, a visually impaired man representing people living with disabilities from Arandun ward, in Irepodun local government area APC faction loyal to Governor AbdulRahman AbdulRazaq has recounted the alleged assault and dehumanization he suffered in the hands of persons loyal and allegedly acting on instructions of some elected and appointed political office holders in Irepodun local government of Kwara state.

He particularly pointed accusing fingers at Hon. Olawuyi Ajuloopin representing Irepodun/Isin/Ekiti/Oke ero federal constituency at the National Assembly and Hon. Jide Oyinloye, TIC Chairman of Irepodun local government as some of the masterminds of the attack launched on him on 12th of January, 2022.

Odebunmi, who runs a cassava grinding factory in Arandun, while narrating his ordeals with Rep. Ajuloopin and Oyinloye said “I don’t know what I have done to deserve the kind of disdain Ajulo has for me. I begin to wonder if it was a crime for me to support his ambition.”

Odebunmi, who has been actively involved in politics before 2011 elections under the defunct Action Congress of Nigeria (ACN), which later joined the merger that formed APC said he was formerly a party Exco member in Arandun ward, before his selection to represent the disabled in the local government party structure, after 2018 reconstitution of the party structure in Kwara state.

“I was part of the people that worked tirelessly for Ajulo’s victory during the bye election and main 2019 elections. I was one of the five (5) survivors in the accident that claimed no fewer than 5 lives while we were returning from Ajulo’s victory rally at Oro on November 18th, 2018, where I got my left hand broken. Ajulo neither checked on me nor contributed to my medical bill, but I thank God for my life.

“It is however most unfortunate that the same person whom I got my left hand broken because of him occasioned the fresh fracture currently on same hand”, he recounted.

He explained “For reasons I don’t know, Rep. Ajuloopin and the TIC Chairman of Irepodun Jide Oyinloye suddenly ganged up against me and instigated people to insist the party doesn’t need me as representative of people with disability in the Party executive, even though it is provided for by the Party’s constitution.

“Perhaps, my support for the rightfully elected Arandun ward Chairman recognized by the APC state executive, against the personal interest of Ajulo and Oyinloye is the reason for their animosity against me. I however never believed they could go to the extent of sending people to attack me”, he said.

“They have divided the party in Arandun ward. Jide Oyinloye diverted #360,000 given to our ward for ward congress and another #50,000 for local government congress, yet, we didn’t complain.

HOW I WAS AMBUSHED

Odebunmi said he got invitation from the local government APC Chairman, Azeez Yakubu for a party stakeholders meeting at the Irepodun local government hall, Omu Aran with two others; Kunle Adeyeye and Iya Mainasara.

“When I arrived the venue alongside the Arandun ward Chairman, Kunle Adeyeye since I couldn’t see, the Chairman told me that 12 of the factional executives of the Arandun ward loyal to Ajuloopin and Oyinloye were already there with a bus, against the 3 of us invited for meeting from the our end. I however told him to let’s see what action the party Chairman will take. However, he left them to attend the meeting.”

“After the meeting, the Chairman shared #1,000 to each of the attendees, including myself and 2 others who went with me. Before I could know anything, I noticed about seven (7) persons pounced on me to bring my own #1,000 that I’m not entitled to attend the meeting.”

“They tore my clothes and twisted the hand with which I held the money and a bag containing #500,000 I was to deposit at First bank after the meeting, till I had a fracture on same hand that got broken in an accident on my way from Ajuloopin victory rally. I was weak, they collected my money, broke my sun shades and left me there.” 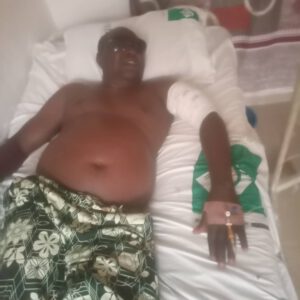 “The Arandun ward Chairman, who cautioned them to pity my condition during the act later helped me out of the venue. When I got home, my wife noticed my hands had swollen and I was taken to the hospital, where I was told I’ve fracture on my hand.”

“I heard home but was feeling uncomfortable with the hand. I went to General Hospital Omu Aran where I was told I have new fracture on the hand. I later went to another hospital in Oro.”

“I reported the case at Omu Aran police Division but the TIC Chairman was peddling influence to frustrate the case. I later reported the incidence to the Criminal Investigation and Intelligence Department (CIID) of the Kwara state Police Command, where I was referred to Police clinic, where it was actually confirmed by the Police that I have a fracture as a result of the attack.”

“Although there has been pressure on me to withdraw the case from the police but I demand justice. If they could be this ruthless with me as a disabled person, they can kill people for political reasons. In fact, my personal security is threatened”, he submitted.

Asked if by chance, he knows those who actually launched the physical attack on him, he responded in the affirmative and listed “Seun Atolagbe, Ezekiel Olajide, Seun Olaoye. Teju Oniganna Oyedepo, Salihu Adewunmi”, among other whom he said people he went there with identified.

Attempt by our correspondent to get reactions from Hon. Ajuloopin proved abortive as his phone line was unreachable and texts sent to him were not responded to.

In a telephone conversation with Fresh Insight’s correspondence, Mr. Jide Oyinloye, Irepodun local government TIC Chairman denied any connection with the attack or the attackers of Olu Odebunmi.

Queried on the insinuation that he is peddling influence to prevent Odebunmi’s attackers from facing the wrath of law, Oyinloye said he only pushed for amicable settlement between parties involved in the conflict since it is ‘a family affair’ between party members.

“As the TIC Chairman, my business is governance and not party politics.  However, I am a member of APC from Irepodun and must show concern to maintain peace and orderliness in the party. What I tried doing in this case is to broker peace. I am not from Arandun ward, I don’t know the genesis of their issues but all I wanted was peace as I am for both sides”, he said.