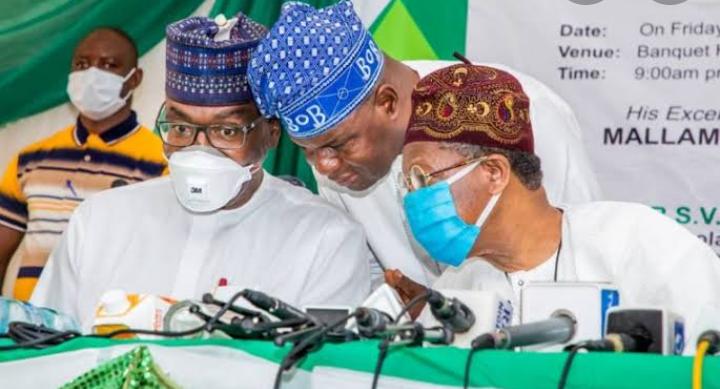 The Kwara APC crisis might take a drastic turn in the next few months if the fears of the State caretaker Chairman, Hon. Bashir Omolaja Bolarinwa is anything to go by.

Bolarinwa while addressing selected newsmen at the side of the Sallah get together for selected party stakeholders and their spouse drawn from across the 16 local government areas, expressed disappointment with the way and manner the Mai Buni led National caretaker executives have handled the Kwara crisis thus far, stressing that “with all intent, they’ve not been sincere with the grievances of majority of party members.

“The national leadership of party is toying with Kwara, we’ve told them the reality on ground and they appear not to be interested in sincerely addressing the genuine grievances of majority of party members, all in the name of solidarity with their colleague.

“I want it to be on record that if mass exodus or implosion should hit Kwara APC, Buni and his people should be held liable. This is a party Kwara people built with their sweat, yet some few people are taking them for granted.

“Up till now, we’ve not seen any party membership registration in Kwara State, yet they announced extension of registration on paper and refused to send registration materials to the field.

“Isn’t that a subtle way of encouraging party members to find abode somewhere else ? Why is the National leadership of the APC hellbent on sending almost 80% of its membership strength out of the party ? What do they stand to gain ?

” I enjoin President Muhammadu Buhari as the leader of the party to rein in Buni and his colleagues, so as to harmonise all interest and guide against a calamitous implosion and mass exodus from the party ” he stressed.

On the options available to the group with the insistence of the party to continue with congresses even without settling the crisis and complaints of disenfranchisement in the party’s membership registration he said “The option open to us is we’re coming up with a concrete plan, we still have hope in this party and we’re thus not contemplating leaving the party, however if they eventually refuse to do the bidding of the majority, whatever comes of it they’ll be solely responsible.

Gov. Abdulrazaq and the Assault on Ilorin Emirate

Saraki, others attend as Emir turbans Baraje as Tafida of Ilorin