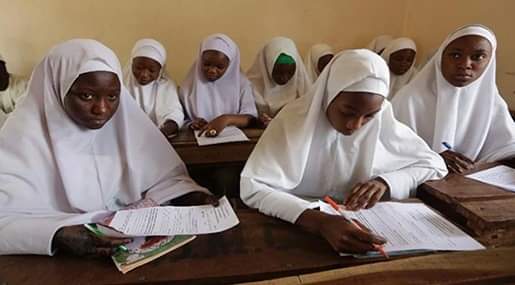 By Ibrahim Sheriff (Gold)
Kwara state Government has announced that the ten public/grant-aided schools earlier shut over Hijab controversy will remain closed until further notice, citing ‘safety reasons’.
“The Ministry of Education and Human Capital Development, Kemi Adeosun wishes to inform members of the public that the 10 government schools where the use of hijaab is disputed will remain shut until a later date”, a statement by the Permanent Secretary Ministry of Education and Human Capital Development, Kemi Adeosun said.
While directing schoolchildren and teachers in the affected schools to remain at home until the contrary is announced, the state government said the decision has been taken for safety reasons.
Affected schools include C&S College Sabo Oke, ST. Anthony College, Offa Road, ECWA School, Oja Iya, Surulere Baptist Secondary School, Bishop Smith Secondary School, Agba Dam and CAC Secondary School Asa Dam road.
Others are St. Barnabas Secondary School Sabo Oke, St. John School Maraba, St. Williams Secondary School Taiwo Isale, and St. James Secondary School Maraba.
Recall, that Fresh Insight had on February 19th, 2021 reported temporary closure of some grant-aided schools in Ilorin, the state capital, pending resolution of the Hijab question in the schools.
Despite the position of the State government a week later, which approves the right of the Muslim schoolgirl to wear the Hijab, and consequently directed the Ministry of Education and Human Capital Development to come up with a uniform Hijab for all public/grant-aided schools, which will be the accepted mode of head covering in schools, there has been mixed reactions from religious leaders across the State over the issue.
According to a statement by the government through a release signed by the Secretary to the State Government, Prof. Mamman Sabah Jibril, the government said it considered submissions of all major interest groups on the matter, the education law of Kwara State, prevailing court judgments, declaratory’ nature of the subsisting judgments of the Court of Appeal and their purports and current global trends of multiculturalism in arriving at the decision, which it believed will bring lasting peace and understanding to our communities.
The desired peace however appears unattainable yet, as Christian leaders rejected the government’s directive, calling on Christian faithful to occupy the affected schools and to hold a day of prayer and fasting for divine intervention. While Muslim leaders insisted that students should be allowed to use the head covering in accordance with the Constitution.