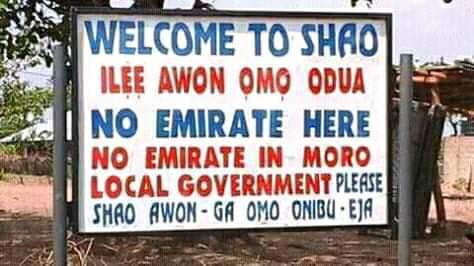 Some Elders from communities in Moro local government have lashed back at Ilorin Emirate Council, following a statement credited to the Magaji Nda of Ilorin, Alh. Saliu Woru, registering the latter’s rejection of the call for grading of Chiefs of Jebba and Shao.

The attention of Moro Concerned Elders Movement (MOCEM), a Socio-Cultural Organization of the progressive indigenes of Moro Local Government is drawn to the above release by one Sallu Woru Mohammed, the Magaji Nda of Ilorin, on behalf of the Ilorin Emirate Council in the Daily Trust of 8/5/2020, allegedly cautioning Kwara State Government against acceding to the request for the elevation of traditional Chiefs of Jebba and Shao in Moro Local Government Area.

This was contained in a press release jointly signed by Alhaji Isiaka Ayinde Jimoh , Dr Bolaji Alabi Afolabi and Chief Theophilus Sunday Oyebiyi
the President, General Secretary and Director of Publicity respectively, stressing that the Moro people are of a distinct ancestry.

“While it is not our intention to take issues with both the author and his sponsors, it is considered dangerous to allow the misinformation, distortion of facts and outright and deliberate attempts to confuse both the public and the Kwara State Government of the fact on the issues of grading of traditional Rulers in Moro Local Government Area, as variously earlier raised by Moro Concerned Elders Movement, several communities in Moro Local Government Area and presently being re-echoed by Moro Students’ Union.

“We hereby want to clarify the various distortions of historical facts, the weak and shallow understanding and workings of the constitution of the Federal Republic of Nigeria, by the publication, which they alluded to have used as the basis of their argument.

“It is important to observe, that the author’s statement making reference to traditional Chiefs in Moro Local Government Area, as “lesser Chiefs” is not only spurious, but can only come from an uninformed mind with a shallow sense of Nigerian history. It is an incontrovertible fact of history that a slave can NEVER understand and appreciate the meaning and value of FREEDOM.

“This is so because, traditional Chiefs in the present day Moro Local Government Area, have always being recognized and accorded grading. Way back in the early 2Qth century, during the colonial period, precisely in1903, the Ohdro of Shao for example, was graded 5th class. It should also be noted that both Ohoro of Shao and Oba of Jebba were accorded recognition and grading by both the administration of Alhaji Ada mu Attah and Mohammed Alabi Lawal respectively.

“We want to recall that in December 2016, Moro Concerned Elders Movement, prepared and issued an all inclusive memorandum aptly titled: ‘An appeal to Kwara State Government, the Ruling Oligarchy, and all people of conscience worldwide on the grading of Kwara State Traditional Rulers; Moro People Demand for Justice”, a document which detailed out all the injustices to Moro Local Government Area, as it relates to the issue of traditional institution by the ruling Oligarchy.

“We, hereby plead with the dynamic Government of His Excellency AbdulRahman AbdulRazaq to totally ignore the annoying “Caution” of the llorin Emirate Council through Saliu Woru Mohammed, because it is anti-people and unconstitutional. Our demand therefore remains as follows:
Immediate implementation of the Kwara State Government white paper of 17th December 1987 which directed that the appointment of District Heads from Ilorin for Moro Local Government Area be abolished and that such appointment be made, henceforth from among the indigenes of the Local Government Area.

Immediate implementation of the various court judgments in favor of Moro Local Government Area on traditional institution, such as the judgments in the Suit NO KWS/231/894 of 22/10/1997 delivered by Hon. Justice Ibiwoye as well as that of Hon. Justice Oluyemisi Ajayi.

Immediate remedy to the degrading injustices done to Moro Local Government Area, by first restoring the Ohoro of Shao and Oba of Jebba to their pre-1984 status and subsequent elevation to first Class Status to meet up with their counterparts like Olusin of Isin, Olupako of Share, Olosi of Osi e.t.c.

Immediate refund of over #5 Billion illegally deducted from Moro Local Government allocation since inception in 1995.

In conclusion, we want to state that:- “it is always difficult to count on the cooperation of a man, who knows that his rights are being manipulated and trampled upon, knowing that he is being denied what everybody else is enjoying, without exerting any extra effort”. This quotation aptly captures our various un-relenting spirit behind the on-going struggle as well as the full involvement f our sons and daughters, the Moro Students’ Union, in whom we are so pleased and very proud of.

The author’s advice in his publication, to our dynamic and very cerebral Moro Students’ Union members is worthless, from a man who has failed to train his own biological children to be of good behavior to the society.