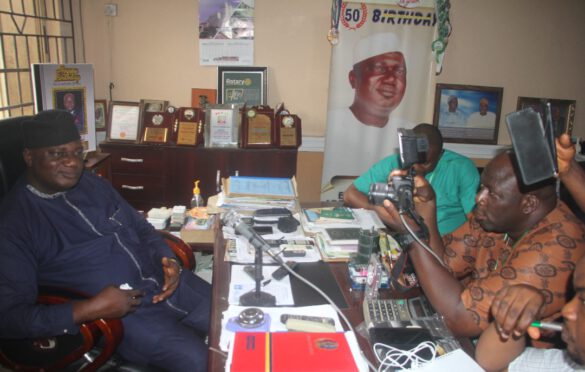 Chairman, The Osun Progressives, TOP, Elder Adelowo Adebiyi, has labeled the Governor Gboyega Oyetola administration as a failed one for performing below expectations and not leveraging on the good works of his predecessor, Ogbeni Rauf Aregebsola.

In a chat with the Nigerian Guild of Investigative Journalists, NGIJ, during its ongoing Governance Assessment Tour in the State, Adebiyi said it is disheartening to see that Governor Oyetola who was the Chief of Staff to the current Minister of Interior while he was in the saddle, failed to build on the legacies of Aregbesola.

He said the Governor who is seeking re-election for a second term is alleged to have failed to carry major stakeholders of the All Progressives Congress, APC, in the state who are loyal to Aregbesola along in governance, prompting the Osun Progressives to queue behind Moshood Adeoti to succeed the incumbent Governor.

He revealed that the recent APC governorship primary in the state which made Governor Oyetola the APC candidate in the forthcoming Osun gubernatorial election is already a subject of litigation in the state High Court.

In his words, “Governor Oyetola has performed below expectations, I believe this government should have built on the achievements of the past administration rather than trying to destroy the legacies of the past government which incidentally is of the same party.

“For example rather than embarking on a massive food production in the State, the government is busy sharing food to the people every month. How sustainable is that?

“The APC has been in power in the State for the past 12 Years, and for eight years it performed brilliantly in terms of infrastructure and people oriented policies, but the past three and half years under Oyetola has been appalling.

“Instead of the Governor to invite investors to develop the State by creating an enabling environment and eradicating poverty in the state, he is busy fighting with Aregbesola and those who he perceives to be close to him”, he said.

Adebiyi added that the policy formulation of the present government is not in line with the needs of Osun people.

“The State economy is in dire need of resuscitation, sadly, the state of Osun is not benefiting from the anchors borrowers initiative of the Central Bank of Nigeria, CBN, which targets massive food production for states across the country”, he noted.

The former APC Chairman in the state said Governor Oyetola is owing pensioners who has served the State for several years and ought to be enjoying the dividends of their service, but are wallowing in penury due to the insensitivity of the Governor to their plight.

“It is really pathetic for the Osun State Pensioners to be going through this hardship under Governor Oyetola. If the Governor needs to source for loan to pay these Pensioners he should do so and stop impoverishing the people”, he added.

Elder Adebiyi however advised that for the sake of the All Progressive Congress in Osun State, there is a need for the governor and Ogbeni Aregbesola to close ranks and find lasting solution to the lingering disagreement in the party before the forthcoming election in the state.

In the same vein, the Secretary of the Accord Party in the State, Alhaji Nasiru Bolarinwa berated Governor Oyetola’s administration, stressing that for the past three years in the saddle, the only thing he has done that is visible is the newly constructed Olaiya bridge in the State.

He added that the governor failed in fulfilling his promise of a free education for the pupils of Osun state, which he said has increased the number of out of school children in the state.

However, when the NGIJ team visited the APC Secretariat in the State to speak with the Party leadership, the team was kept waiting for more than an hour before the team left for another pending engagement.