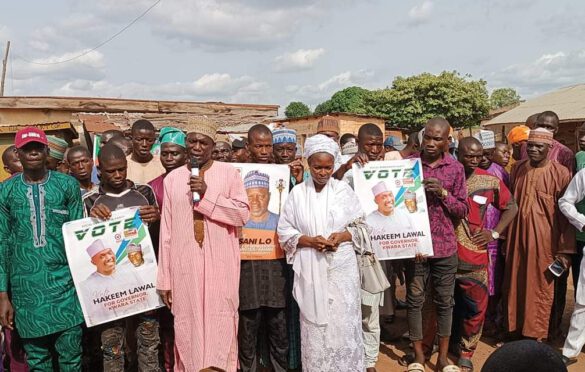 The re-election bid of the Kwara State Governor, Mal. Abdulrahman Abdulrazaq yesterday suffered a major setback as thousands of his staunch supporter dumped the ruling All Progressives Congress for the Social Democratic Party, in Baruten local government area of Kwara State.

The defectors who was led by an aggrieved House of Assembly Aspirant, Prince Umar Sariki Usman, the son of the Emir of Yashikira while giving reasons for their defection decried the highandedness and impunity that has characterized the party, stressing that imposition of candidates against local zoning arrangements is now the order of day.

Speaking further, the Makama Yashikira Alh. Adamu Yusuf said “We have gentleman agreement of power rotation between Okuta and Yashikira divide making up our constituency, it is now the turn of Yashikira to occupy the Assembly seat, sadly the APC decided to breech the agreement and I want to let you understand that an average Batonu man will always stand by his word, that’s why we’ve decided to leave the APC and pitch our tent with the SDP is the party and no going back.

The defectors in turn promised to erase the memory of APC from the local government after which they did a symbolic burning of the broom (APC logo).

Sen. Ajadi who represented Kwara South at the red chambers of the National Assembly between 1999-2005 is a former Gubernatorial candidate and also the former Special Adviser, National Assembly to President Goodluck Jonathan.

He had been one of the greatest advocates of the Governor, especially in the internecine war that pitched the former party Chairman, Hon. Bashir Omolaja Bolarinwa against the Governor.