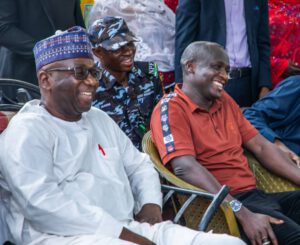 The Speaker, Kwara State House of Assembly, Rt. Hon. Salihu Yakubu Danladi has described the Executive Governor of Kwara state AbdulRahman AbdulRazaq as making unprecedented history in the governance trajectory of the state, as he continues to touch lives of every class of Kwaran with his purposeful leadership.

In a statement issued to journalists in Ilorin by his Special Assistant, Media, Ibrahim Sheriff on the occasion of the Governor’s one year in office, Danladi congratulated the people of Kwara state for a year of breathing sigh of freedom and developmental relief, which the government of AbdulRazaq is bringing forth.

“On behalf of the Hon. Members and staff of the Kwara state House of Assembly, I congratulate the people’s Governor AbdulRahman AbdulRazaq for his productive one year in office as the Chief Executive of the Kwara state. I ultimately congratulate the great people of Kwara state for a year of breathing sigh of developmental relief occasioned by the purposeful leadership with which this administration is emblemise”, Danladi said.

“From the North of Kwara to the South and the State Capital, you have continued to rejuvenate public infrastructure across sectors, you have also successfully shifted the paradigm of governance from personalization to institutionalization, from politicization to de-politicization, and from extravagance to prudence.

“Kwarans’ commonwealth is efficiently utilized through completion of ongoing public infrastructures and rehabilitation of existing ones. Your Excellency has demystified governance in a way that gets government closer to the people.

“Our constituents across the 24 constituencies are grateful for bringing the light after long years of darkness, for providing water sources after decades of none, they thank you for enabling conducive learning environment for our children and for constructing roads across the State. It is on record that the present administration constructed the first asphalted road in my country home, Gwanara. So, is the remarkable presence of this government in every constituency across the state.

“Your Excellency, as a young person, I particularly want to, on behalf of the younger generation applaud your trust and confidence in the ability of the youth, which is evident in your cabinet composition, which has significant concentration of young people. By that singular gesture to the youth constituency, you are not only empowering the youths but equally grooming emerging set of leaders to bridge the widened generational leadership vacuum”, Danladi added.

While concurring more needed to be done to satisfy the thirst of Kwarans for people oriented development, for which they were deprived by successive governments.

Danladi noted Governor AbdulRazaq have performed satisfactorily, thus far and assured him of the continued readiness of the 9th Kwara legislature to offering legislative supports needed to drive his visionary leadership of the State.

“We pray God Almighty continue to guide your path and enrich you with the wisdom and strength required to fulfill your desired prosperous and sustainable Kwara state we can all be proud of”, he concluded.