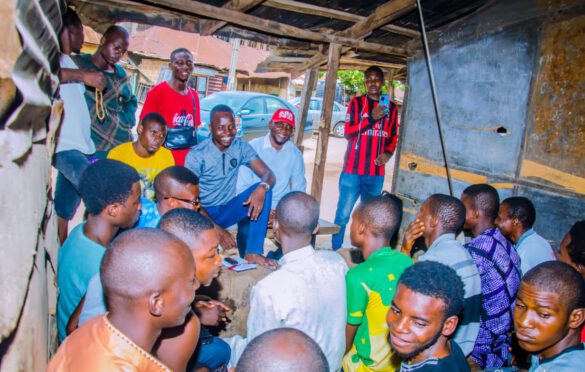 As the forthcoming 2023 general elections approaches, AbdulRahman Abdullah Kayode, who is a member of the Reconciliation and Engagement Committee of the Peoples Democratic Party in Kwara state has charged youths in the State to be more involved in the political process for the future of the state and the country.

He explained that the first step to consider oneself as part of a political process to see the end of the ruling APC that has dashed the hope of Kwarans and Nigerians by extension, through the bad governance that resulted in the current economic situation of the people, is to get one’s Permanent Voters’ Card (PVC) ready and updated in order to participate in the various electioneering processes.

Speaking at a meeting organized by a Pro – Saraki group led by Mr. Mohammed O Abdulkabeer Jiddah, at Alanamu Central Ward, in Ilorin, Abdulrahman who is fondly called GreatKay, noted that with preparations for the 2023 elections already afoot, youths will not only have a huge role to play in changing the narratives of leadership across the country by entrenching the needed shift across board but will be at the forefront of political calculations and permutations.

He appealed to all the supporters of the party who are yet to have their voters’ cards to do so now before it’s too late, saying that INEC will start the forth quarter of the continuous voters’ registration on Monday 11th April, 2022. He added that doing so is the only way that the mandate of the people could be returned.

He, however, called on the PDP members and aspirants, especially the youths to stop casting aspersions against the contenders of their preferred aspirants during the pre-ticket period but be more united during the period. He also charged them to be discerning of APC’s propaganda and cautious of other dubious calculated attempts that could smear the images of the candidates.