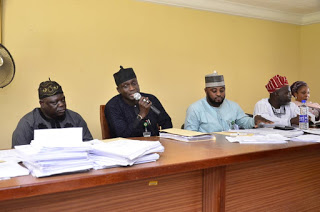 The 16 suspended LG chairmen of Kwara State have continues to draw monthly salary from the council even after being placed on suspension over corruption allegations by the Kwara State House of Assembly, freshinsight.tv have gathered.

This much was in a press release signed by Com. Sheriff Ibrahim, the S.A Media to the Speaker, who quoted the Speaker, Rt. Hon. Salihu Yakubu Danladi during the rounding up of the Hon. AbdulGafar Ayilara led investigative committee, stressing that no attempt at labeling the move of the Assembly as politically motivated would deter the 9th Assembly from ensuring accountability takes root in the State.

Danladi said “We are not here to witch-hunt or harass anyone and you can see the process has been civil. It is simple, if you have no skeleton in your cupboards, you should be bold to appear and clear the air before the committee”.

“The suspended Chairmen collected June and July salaries, that shows you are only suspended and nothing more, why can’t they tell the public they are still drawing salaries from the LGs purse?, he queried.

Commending the 12 local government Chairmen who chose to defend themselves and clear their names, he promised them that they’ll get justice.

In his remark, the Chairman House Committee on Local Government and Chieftaincy Affairs, Hon. AbdulGafar Ayinla Ayilara said they have gathered documents and information from all the 16 local governments, save for 4 suspended local government chairmen who declined their invitation. and  have been done justice, save 4 that failed to appear.

He said suspended chairmen of Irepodun, Ekiti, Ilorin West and Ilorin East local governments  failed to appear before the committee for interrogation and added that the committee will commence oversight to establish facts behind some of the submissions received by various stakeholders during the cause of investigation.