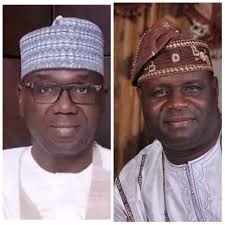 Information just reaching Fresh Insight have it that the Executive Governor of Kwara State, Mal. Abdulrahman Abdulrazaq, his Kano State counterpart and the Kwara State chairman of the All Progressives Congress (APC) are currently locked in a close door meeting.

Sources in the know of the arrangement said “They’re presently locked in a meeting at the Presidential wing of the government house which have been serving as the Governor’s temporary office since inauguration.

Details of the meeting are still sketchy as at the time of filing this report.