In what appears like an attempt to hijack the trial of suspect who allegedly attacked APC stalwarts, during a stakeholders meeting in Lafiagi, Edu local government of Kwara state on February the 8th, 2021, the Abdulrazaq led Kwara State government has requested that the case be transfered to Ilorin, the state Capital.

Recall, two gubernatorial aspirants from Edu local government; Alh. Tajudeen Audu (Makama) and Alh. Shuaib Abdullahi Yamman among other stakeholders of the APC seen not to be on the Governor’s side in the lingering party crisis were recently attacked by hoodlums, allegedly on the instruction of an aide of Governor Abdulrazaq and some political appointees from the local government.

Reacting to the incidence, Kwara State Governor AbdulRahman AbdulRazaq through a statement by his Chief Press Secretary Rafiu Ajakaiye condemned the alleged violent attacks on APC chieftains of in Edu local government area of the state, calling on security agencies to go all out against anyone involved in violence of any kind.

The Governor also described as unfortunate and politics taken too far the claim that his aides currently on different assignments in Ilorin, the state capital, are the ones physically behind the unfortunate incidents in Gbugbu area of Edu local government.

“The administration has zero tolerance for violence. The development in Edu is unacceptable. Anyone found to have perpetrated the violence should be arrested and prosecuted”, the Governor said.

Meanwhile, Eleven (11) people suspected to be behind the recent attack of the APC members during the party’s stakeholders meeting in Lafiagi were served summons to appear in the Lafiagi Magistrate Court on Friday, February 19.

The said suspects were first invited by the Lafiagi Police Command, following a petition written and signed by some members of the party in the local government and later granted bail.

In a new twist however, a letter dated 17th February 2021, addressed to the Director of Area Court, Judiciary headquarters, Ilorin and signed by Director Public Prosecutions, Kwara state Ministry of Justice J A Mumini SAN, a copy of which was exclusively obtained by Fresh Insight, the State government applied for the transfer of the case to Ilorin for “ease of trial”. 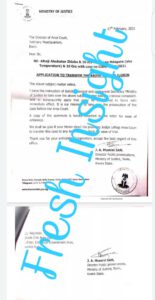 The letter reads “I have the instruction of Solicitor General and permanent Secretary Ministry of Justice to take over the above subject matter being a criminal complaint and to subsequently apply that same be transferred to Ilorin with immediate effect. It is our intention to take over the prosecution of the case before the Area Court.’’

“A copy of the summon is hereby attached to the letter for ease of reference.”

“We shall be glad if your Honor direct the presiding Judge Lafiagi Area Court to transfer this case to any Area Court in Ilorin for ease of trial”.

Reacting to the request for transfer of case, one of the victims of the attack, Engr. Umaru Shaaba said “We heard about possible transfer of the case to Ilorin. We were told the Presiding Judge was summoned to Ilorin and told to hands off the case, that the state government is interested in it. But we didn’t live by that rumor, we (all the victims) went to court today and the Court registrar told us the case has been transfered to Ilorin.”

Shaaba added that “we are not giving up in our pursuit for justice. Although the Governor through his spokesperson said they don’t have hands in political violence but this unusual interest in a criminal case speaks otherwise. We are consulting with our lawyers, it is not over until it’s over.”

The Press Secretary, Ministry of Justice, Pastor Shola Oyinloye in his reaction said he is not aware of such development and therefore directed our reporter to the DPP or Permanent Secretary.

The DPP Mr. Jimoh Mumini SAN, when contacted however said “I am just getting to know about it (the alleged request for transfer of the case), but I will make findings about it”.