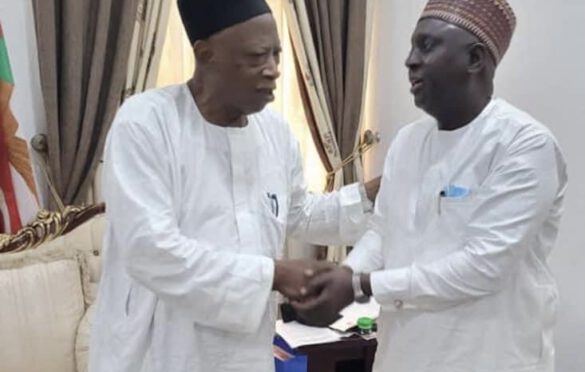 Amid uncertainties surrounding who bears the All Progressives Congress flag in the forthcoming Kwara Central Senatorial contest, incumbent Senator Ibrahim Yahaya Oloriegbe, has turned to his former colleague and National Chairman of the Party, Abdullahi Adamu for help, Fresh Insight can report.

Observers noted that Sen. Oloriegbe sidestepped Governor AbdulRahman AbdulRazaq who is the leader of the Party in the State, to seek for help from Adamu.

Oloriegbe was at the Chairman’s Abuja residence on Friday to discuss about the 2023 poll, impeccable source however said how to secure the incumbent Senator’s return ticket was at the centre of their discussion.

Shortly after this mediun was briefed about Oloriegbe’s move, he posted about the meeting on his social media pages, leaving out the details of their major discussion.

“Today, I had lunch with the National Chairman of our great party – All Progressives Congress, my leader and former colleague Senator, H. E Distinguished Senator Dr. Abdullahi Adamu.

After the lunch, we had hearty discussions on issues relating to the party in Kwara and nationally as well as issues of governance that will enable our party to deliver more dividends of democracy to Nigerians,” the Senator wrote.

Before now, Oloriegbe has been scampering around the party for an assurance of a return ticket to the Senate.

According to feelers, the Senator had been banking on his relationship with the Kwara state Governor, Abdulrahman Abdulrazaq, hoping that he would make that happen.

This, they said, informed his decision to include Governor AbdulRazaq in his campaign posters with an intent to portray himself as the Governor’s anointed candidate.

As a fallback option, Oloriegbe was also banking on his relationship with his political godfather and Senate President, Ahmad Lawan, who, he believed, could commandare the party’s national chairman to hand him a return ticket on a platter.

Lawan, during his recent visits to Kwara state to receive a Chieftaincy title and later, for commissioning of Budo Egba neuropsychiatric hospital was said to have appealed to Governor AbdulRazaq to consider the three (3) Senators for return tickets. This request, Fresh Insight gathered was at the behest of the Senators.

But the contest took a different turn with the heightening clamour that the seat be zoned outside of Oloriegbe’s constituency, Ilorin West. It is worthy to note that the Kwara Central district comprises four local government areas including Ilorin West, Ilorin East, Ilorin South and Asa.

The proponents of this zoning arrangement argued that the office had in the past two decades been occupied by politicians from Ilorin West, thus putting other areas in a marginalised position.

In the past weeks, socio-political and community development associations have written to prominent people including Governor AbdulRazaq, and the Emir of Ilorin, Ibraheem Sulu-Gambari to wade into the matter and support the agitations.

It is however unclear if the party is going to hand over a return ticket to Oloriegbe, go for a consensus or have him slug it out with other contenders at the primaries, Yahaya Seriki, a young and vibrant business mogul who is rumored to be the favorite of the Governor and Saliu Mustapha, a later entrant into the contest.

The fear of losing out at the primaries, should the party consider that route, might have informed the decision of Oloriegbe not to trust the Governor, another source close to the Senator’s camp, stated.

The source added that Oloriegbe had gone to the Chairman to seek his support like a former colleague in the red chamber.

Reacting to question on the proprietary of the senator going to cut deals in Abuja, Media aide to Sen. Oloriegbe, Bolaji Aladie said his boss merely visited Adamu to felicitate with him on his emergence as the Party’s National Chairman, noting that he was not the first aspirant to make such move.

Asked further about details of the meeting, Aladie said the Senator met and discuss with the National Chairman behind close doors and nobody is privy to their discussions.

However, a staunch supporter of Senator Oloriegbe who craved anonymity said “The Senator went to the national chairman for a solution to a problem being created by the governor. The governor is the cause of the problem because he is not following up on the promises made to the 3 Senators, he can’t be the solution again.”

Although the supporter refused to clarify on what he meant as problem, information at the disposal of our correspondent suggest that the Senator’s camp is already feeling ‘betrayed’ by the Governor’s camp.