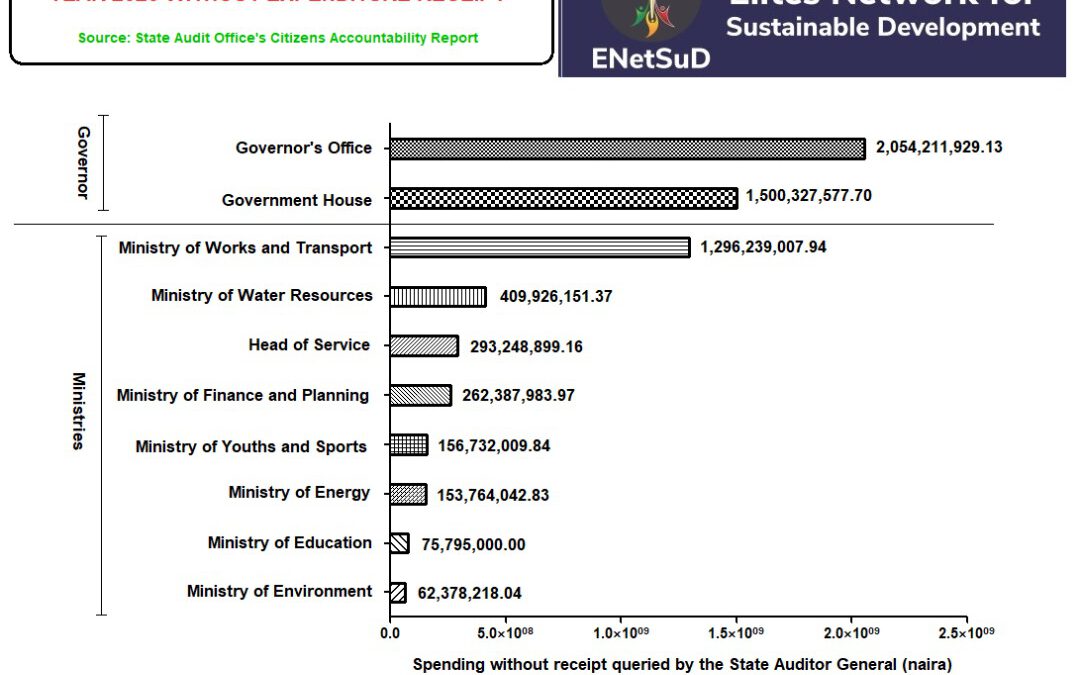 ENetSuD kicks, as Kwara government spend ₦6.2B in 2020 without receipt

This development is coming barely a week after the Centre for Fiscal Transparency and Integrity Watch (CECFTIW) rated Kwara State as the third most transparent State in Nigeria.

According to a statement issued by ENetSuD’s Press Secretary, Saeed Tijjani, “In the 2020 Citizens’ Accountability Report published on Thursday, Sept. 30, by the Permanent Secretary of the State Ministry of Finance, Folorunsho Abdulrazaq, ten (10) Ministries, Departments, and Agencies (MDAs) were listed as the top queried public fund spenders without providing expenditure receipts.”

“After careful re-analysis and re-calculation, ENetSuD noted that a total of Five Hundred and Ninety-Two (592) audit queries amounting to ₦6,265,010,819.98 were raised by the State’s Auditor General in the 2020 Financial year.”

Reacting to the report, ENetSuD Coordinator Dr Abdullateef Alagbonsi, expressed shock that the Governor’s Office is reportedly the top abuser of office by spending ₦2,054,211,929.13 without any relevant expenditure receipt.

In the year 2020, the Governor’s Office received a total of 166 audit queries from the Office of the Auditor General of the State.

The next to the Governor’s Office in the rank of spending public fund without receipt is the Government House that received 95 audit queries for spending ₦1,500,327,577.70 without any relevant expenditure receipt.

ENetSuD charges the Kwara State House of Assembly to, as a matter of urgency and in the public interest, carry out its constitutional duty by carrying out robust, extensive and thorough investigation on how the KWSG spent the money.

ENetSuD reminds the KWHA that failure to do its duty and report its findings to the public whose taxes are being spent without due process will not go well with Kwara citizens that they represent in the hallowed chamber.

Why we must all Insist on Electronic Transmission of Results